If China is to meet its net-zero target by 2060, it must look to the aluminium industry and encourage its potential to use decarbonization technology.

Deploying decarbonization technology in the aluminium sector could reduce carbon emissions from aluminium processing by 65% over the next 40 years.

Aluminium producers will need to adopt technology according to needs, depending on geography, access to renewables and value chain, etc.
China is the world’s largest producer of primary aluminium, accounting for nearly 60% of the global market. Simultaneously, the aluminium industry contributes significantly to China’s carbon footprint, making up around 5% of the country’s total emissions. Aluminium producers must, therefore, help China reach its 2060 net-zero target.

The carbon intensity of aluminium smelted in China compared to other regions like Europe is down to its dependency on coal-fired energy – over 80% of all energy used. However, creating low-carbon aluminium in China requires more than transitioning to renewables; it will take decarbonization technologies addressing direct emissions from aluminium processing in a scalable and commercially viable way.

An April 2022 study from Accenture and the World Economic Forum laid out the decarbonization technologies for the aluminium industry, their maturity in China and the challenges facing commercial viability. Producers will need various technologies, developed and deployed over the short and , mid and long term, which could reduce emissions from processing by 65% over the next 40 years, ranging from recycling capabilities to hydrogen development.

Recycled – or secondary – aluminium produces around 5% of emissions compared to primary aluminium. Improving the collection, sorting and utilization of aluminium scrap can lower the carbon footprint of the whole industry.

China has also started developing a closed-loop recycling system, although it needs to reach a higher percentage of scrap recovery and reuse; secondary aluminium quality must also be improved to not limit end-use opportunities.

Historically, Chinese producers have leveraged process optimization for cost and emissions savings. While these improvements won’t result in a net-zero product, continual improvement is needed, particularly for facilities not currently feasible for decarbonization.

Inert anode technology is perhaps the single greatest opportunity for the industry to realize a step-change in direct emissions. Replacing carbon anodes with inert anodes during primary aluminium smelting globally targets around 10-15% of the sector’s emissions. Without this, aluminium will likely never be a net-zero material.

The technology remains at the pilot stage however: China lags behind its international peers and intellectual property sensitivities make it difficult to learn from them; there is also a lack of collaboration in the Chinese market to develop inert anode technology.

Inert anodes are expected to become commercially available in China around 2035, achieving commercial competitiveness with carbon anodes after 2050. Currently, inert anodes cost over 250% more than carbon anodes but introducing a carbon price could change the business case. While historically, there has been little to no regulatory support for inert anodes, in February 2022, the National Development and Reform Commission released an inert anode incentive policy to encourage aluminium producers to act. 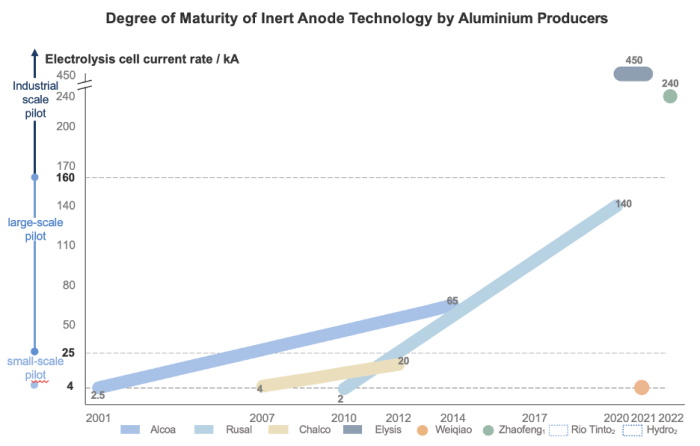 Mechanical vapour recompression (MVR) technology can reduce thermal energy demand by as much as 70% during alumina refining by reusing large amounts of steam. While MVR won’t get a facility to zero emissions, it can benefit sites that are difficult or impossible to transition away from fossil fuels right now. Greenfield MVR is expected to become cost-competitive with traditional 6-effect evaporation technology as early as 2026.

Chalco is trialling MVR technology, which has rarely been applied outside of China, although Alcoa began a feasibility study on using MVR in alumina refining in 2021.

Carbon capture, utilization and storage (CCUS) technology can permanently store carbon or use it as an input into other processes. And it’s set to be a major player in decarbonization efforts over the next 30 years as a proven technology with commercial-scale application worldwide. However, it remains relatively untested in the aluminium sector.

CCUS can capture emissions from thermal energy generation during alumina refining and process emissions but its business case is dependent on the concentration of CO2 in the off-gas, which is low in aluminium smelting leading to high costs.

CCUS adoption is growing quickly in China, anticipated to account for around 22% of global capacity in general yet few still identify it for use in aluminium production and R&D efforts in the country are yet to gain ground. 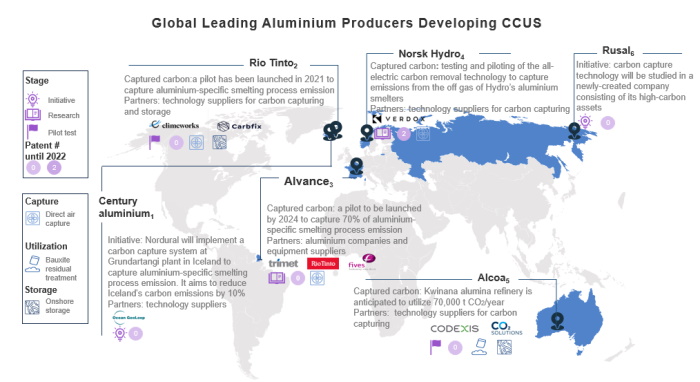 Green hydrogen is one of the only options available to eliminate carbon emissions due to high-temperature power production needed during the calcination step of alumina refining.

Exorbitant costs remain a barrier to scaling up this technology, being seven times as expensive as natural gas. Green hydrogen should become more competitive in the coming years as the cost of electrolyzers and renewable electricity decreases.

The development of green hydrogen technology is in its early stages in China and is mainly driven by leading renewable energy companies.

Wettable cathode
Wettable cathodes reduce the anode-cathode distance during electrolysis in aluminium smelting, presenting an opportunity to reduce energy consumption by as much as 25%. Despite this and its cost-saving potential, this technology will not allow a site to reach net zero.

Wettable cathodes have reached industrial-scale for a few aluminium companies, including RUSAL. However, in China, there has not been significant development since 2012.

Meanwhile, industry-specific policy and government financial support are needed to incentivize further technological development and deployment. Yet, the time for Chinese producers to act is now, as investment is needed so that these technologies can at least reach commercial viability in the next ten years.
Source: World Economic Forum