Demand For Dry Bulk Second Hand Tonnage is on the Rise

Prices for dry bulk carriers could be on the rise, as the market has started to adapt to the realities of the COVID-19. In its latest weekly report, shipbroker Intermodal said that “it seems that what most of potential buyers expected to happen and many tried to push seller towards that direction between March and May 2020 has to be postponed for nobody knows how long. Second hand dry bulk vessel prices did not even approach 2016 levels despite daily earnings were same as to that time, while in some instances increased bunker prices coupled with ballasting vessels resulted in even bigger loses for owners compared to 2016 levels”. 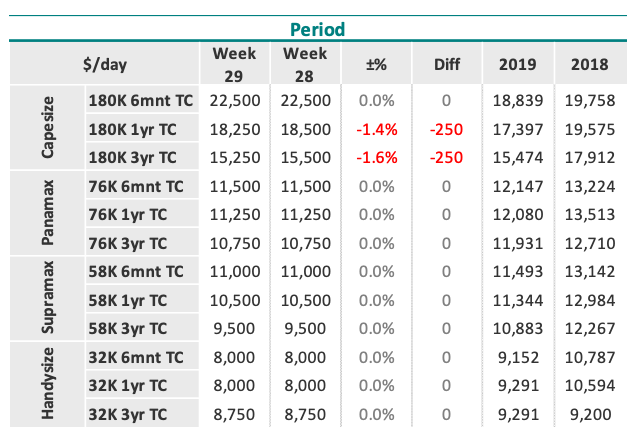 Intermodal’s SnP broker, Mr. Costas Hardalis said that “the lowest recorded price levels in the SnP market this year for each segment were:

He added that “we did not see any sale of post 2010 units and bigger sizes (Japanese built ranging from Supramax to Capesize) while only several Handies 28k & 32k dwt have been committed. However, small-sized asset values have remained low for several years; this suggest that correlation between small and large vessels may be hard to achieve anymore. With the BDI being posted at 1710 points and both Capesize and Kamsarmax average earnings were at $25,000 and $13,500 per day respectively as of 17th July 2020, an increase in the SnP market activity has been observed. At the same time, interest remains high despite both buyers and sellers having to compromise with Covid-19 clauses while a subsequent upside to asset values is more than likely if the current positive momentum continues”.

Hardalis noted that “some notable sales that took place since market rebound are:

Regarding the M/V New Stage (176kdwt 2008 Namura), in early May the best offer Sellers saw was just at USD 14m while now she was sold in the low 16m to Greek buyers. The two-year younger MV Gracefull Madonna (180kdwt 2010 Koyo) has been sold for USD 20,5m to Eastern Pacific. 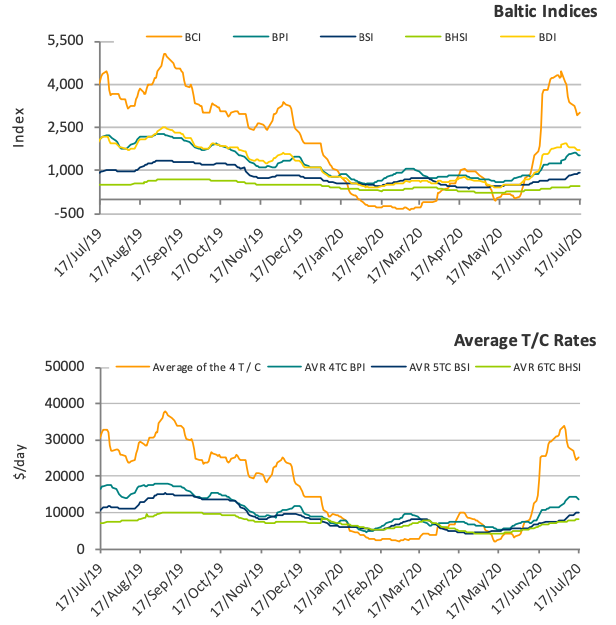 Several kamsarmax vessels have changed hands recently. The M/V KM Yokohama (83kdwt 2011 Sanoyas // DD due 05-2021) after being inspected by 7 parties in Hamburg she was committed to Greek buyers for USD 15m. Both BW Einkorn (81kdwt 2010 Universal) & BW Barley (83kdwt 2010 Sanoyas) have been sold enbloc for USD 14m each to Greek buyers while the BW Acorn (82kdwt 2010 Oshima) has been sold to German Buyers for USD 14m.

In the Supramax sector, Mimi Selmer (55kdwt 2005 Mitsui // SS&DD due 10-2020) has been sold at USD 7,5m a value well above from the USD 6,5m that her sister ship Helene Selmer (55kdwt 2005 SS&DD due 09-2020) sold 3 weeks ago. Owners of Bulk Paraiso (53kdwt 2007 Iwagi // SS&DD passed, BWTS installed) in early June invited offers with the highest that they received being at around USD 7m. However, this past week owners managed to fetch a price at USD 8m for this unit”, Intermodal’s analyst concluded.
Nikos Roussanoglou, Hellenic Shipping News Worldwide

Previous: Are bunkers too easy a target when problems alleged onboard vessels?
Next: Rise in Weekly Unemployment Claims Points to Faltering Jobs Recovery