Russia’s invasion of Ukraine sent seismic shifts through the global gas market. Europe’s efforts to wean itself off Russian gas have left the region searching for ways to plug the gap. As a result, demand for LNG in Europe has soared and turned the global market on its head.

Traditionally when global LNG demand exceeds supply, as we’re seeing today, Europe would act as the balance by bringing in more Russian pipeline gas. But in today’s world, with limited pipeline imports, Europe is now competing with Asia for LNG. And Asia has become the balance market.

Trade flows have shifted radically with Europe, now the premium market, effectively pulling supply away from Asia. This increased competition, coupled with soaring LNG spot prices and Covid lockdowns, has caused Asian LNG imports to fall by 7% year-to-date. The most severe drops have been seen in China (-20%), India (-18%), Pakistan (-14%) and Bangladesh (-13%).

As winter approaches and new uncertainties over the future of Russian gas flows to Europe emerge daily, the risk to Asian LNG demand remains acute. Europe is hungry for LNG so further demand response from Asia is almost certain – this year and through the first half of this decade. But where in Asia is demand destruction at greatest risk?

As the LNG world prepares to descend on Gastech 2022, we explore Asia’s diverse regional gas landscape and the factors that will influence LNG demand response in different countries.

How do high prices impact Asia LNG demand?
Asian buyers have been at the forefront of high spot prices – in some cases driving up prices to new summer peaks, even after the run up in prices started earlier this year.

But Asia is not homogeneous. Uncontracted spot demand in Asia is typically most at risk for demand destruction, as are consumers with weaker purchasing power. The regional gas landscape is comprised of diverse markets, sectors and buyers, with varying spot exposure, purchasing power and downstream market regulation and pricing. And many Asian buyers, despite affordability concerns, have continued spot buying at record high prices this year.

Buyers in legacy markets purchase the majority of their LNG on long-term contracts, which are typically indexed to oil. This helps to insulate markets and buyers from high LNG spot prices and on a weighted average cost basis Asian markets are less exposed than Europe.

Asia’s spending on energy imports has already increased exponentially in 2022 as governments seek to avoid critical ‘light on – lights off’ decisions. In emerging Asia in particular, this has led to soaring gas and electricity prices, rising subsidy bills, rolling power blackouts and curtailments to industrial users. In extreme cases, skyrocketing LNG import costs have exacerbated political and social unrest in countries like Pakistan and Bangladesh. The fiscal sustainability of this high-priced buying remains uncertain.

Which markets are most vulnerable to demand response, and why?
Understanding demand response is a complex analysis. Drivers are ultimately unique to each market. But when assessing demand response in Asia so far this year, two key determinants stand out: the level of LNG spot exposure and availability of alternative fuels, including other non-LNG gas supplies.

High spot exposure and high availability of alternative fuels increases the likelihood of demand response. This characterises markets like China and India which have seen largest reductions to date as consumers switch to coal and fuel oil in power and non-power sectors. Bangladesh, Pakistan, and Thailand are also at the high-risk end of the scale. These markets have high spot exposure but more limited options for fuel switching. As a result, LNG spot buying must continue to avoid blackouts and demand destruction.

At the other extreme are markets with low spot exposure and limited fuel switching alternatives, like Singapore, Japan, and South Korea. These markets are slower to respond, insulated by their contract position and strong purchasing power. Japan and South Korea have more fuel switching options available than Singapore, but these markets are not flexing these options to a large extent yet. However, there’s potential if market conditions persist or further tighten. Southeast Asia’s net exporters, Malaysia and Indonesia, are similarly cushioned from demand response risks. 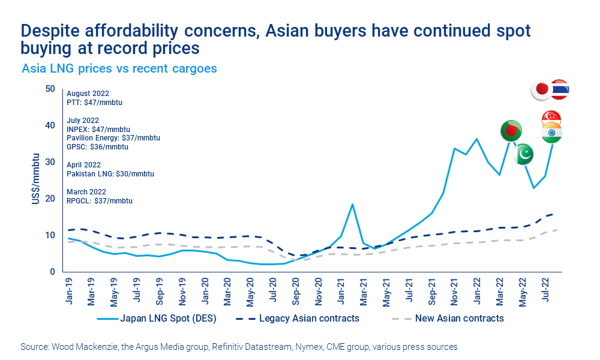 Which sectors are most impacted?
Demand response on a sectoral level also varies market-to-market. Generally, power and industrial sectors show greater flexibility than residential and commercial sectors. This limits the direct impact of gas curtailments on a country’s residents and targets the sectors with greater fuel switching flexibility.

As the crisis becomes increasingly prolonged, market and sectoral risks will inevitably evolve. Some sectors may flex further than they are today while others reach the limits of their flexibility. High priced spot buying may not be economically sustainable for an extended period in many emerging Asian markets. And other markets which do not have to respond today, may be forced to react later.

Where is fuel switching likely?
Traditionally, coal has been a cheaper alternative to gas in Northeast Asian power sectors. But switching from gas to coal has been limited so far this year. Pro-gas policies have meant that countries have not been incentivised to make the change. And with record-high coal prices this year, switching may not significantly reduce import bills.

In South Asia, oil is the primary substitute for gas in key sectors. India has reduced LNG usage by 30 to 40% year-on-year in refineries and petrochemical plants. Large-scale industries have replaced LNG with domestic gas, produced in India’s eastern offshore. And other small industries are switching to fuel oil and liquefied petroleum gas (LPG) for heating. Replacing captive power generation with coal-dominated grid-based power has also offered some savings. 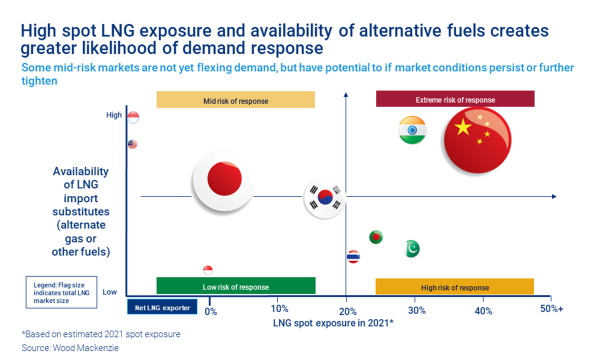 Elsewhere in South Asia, high-sulphur fuel oil (HSFO) has been the fuel of choice. Oil-fired power generation has surged five-fold in Pakistan and 45% in Bangladesh to date. Pakistan’s demand for LNG continues to trend above 2020 levels, but this is likely unsustainable. In contrast, Bangladesh has put a halt on expensive spot LNG imports since July. Both markets are already facing regular blackouts. Demand-side management measures are being implemented but the situation is likely to worsen.

Asia remains the engine of long-term LNG demand growth
As prices soften post-2026, many markets that are cutting their LNG demand today are expected to rebound. How quickly and to what extent Asia demand rebounds, though, is highly dependent on price levels and government policy towards coal. 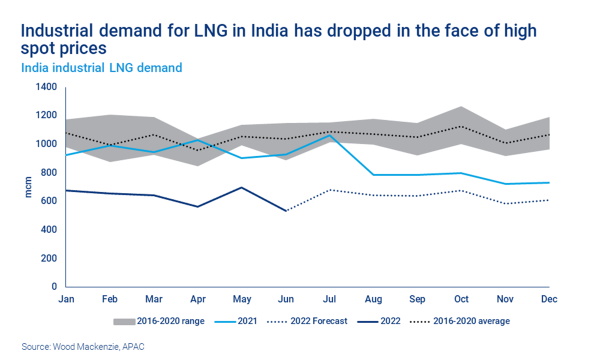 The severity of the current crisis however creates some bigger uncertainties in Asia and perhaps risk of permanent scarring in the region. Could weak demand and economic headwinds jeopardise ongoing investment in Asia’s gas markets – and what will that mean for future demand growth? And will growing affordability and energy security concerns force a reassessment of the role of gas in Asia’s long-term energy transition?
Source: Wood Mackenzie