The ships’ demolition market picked up this past week. However, according to various market reports, both from shipbrokers and cash buyers, the primary focus hasn’t been for tankers or bulkers, but for secondary market units. As a result, further pressure could be the case in freight rates. In its latest weekly report, Clarkson Platou Hellas said that “another ‘low-key’ week has been experienced and the mixed feelings within the industry are leaving Buyers unsure which direction the market is heading and how, or if, to offer for any available tonnage. This lack of confidence that has developed amongst some cash buyers is certainly hindering any possibility of increased price levels. With the Bangladeshi elections looming (end December/early January but exact date still yet to be announced), reports suggest that all the end-users (recyclers) are now happy to sit back and refrain from offering for units until these have taken place. This is therefore putting cash buyers in difficult positions as they weigh up their bids to offer to ship owners without any interest from the yards. It would appear therefore that the Bangladeshi market will slow steam towards the end of this year. In this respect, and with the Pakistani currency facing devaluation woes against the U.S. Dollar, India looks set to lead the way into 2019 evidenced by the acquisition of the few vessels committed this week and could well be the main purchasing nation for the time being in the Indian subcontinent”, Clarkson Platou Hellas noted. 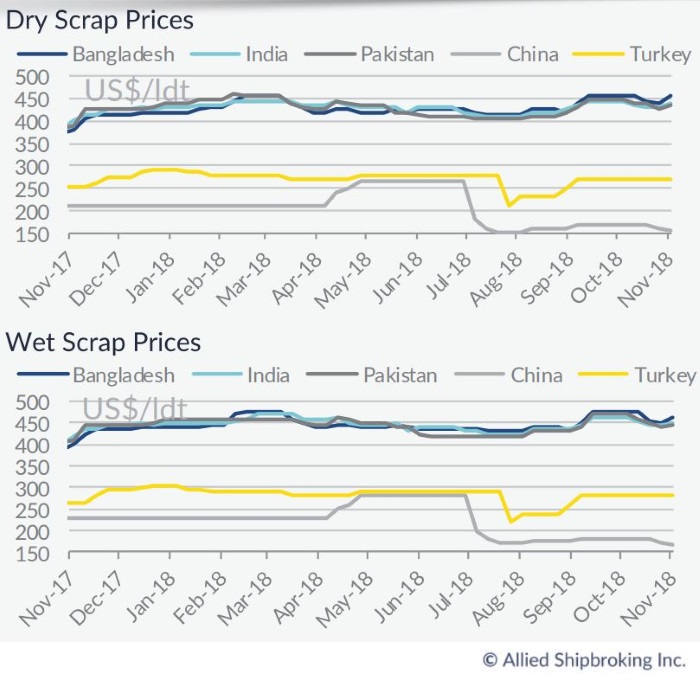 In a separate report, Allied Shipbroking added that “activity picked up again this week, countering the overall trend that was being seen the weeks prior. However, activity has mainly focused on “secondary” segments, showing the drastic decrease in demo candidates being seen from the dry bulk and tanker sectors. On the dry bulk side, there was a Supramax and another small bulk carrier that were sent to be beached last week. At the same time, the only activity reported on the tankers side was a 19-year-old Aframax and 22-year-old MR that were recycled. Bangladeshi breakers remain the key purchasing power in the market right now, but with steel prices on the wain, there does seem to be some trouble brewing on the horizon. Meanwhile, fundamentals in India have started to im-prove now, attracting the interest from some cash buyers, but with offering prices losing ground last week, activity still remains low for the time being. In Pakistan, detrimental FOREX movements have been in part the main reasoning behind the slower buying interest seen there”. 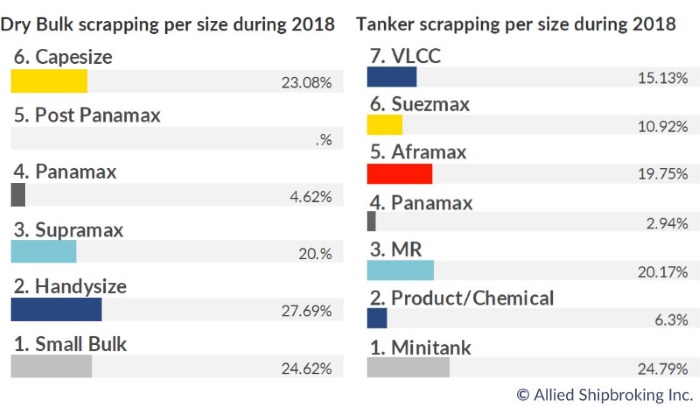 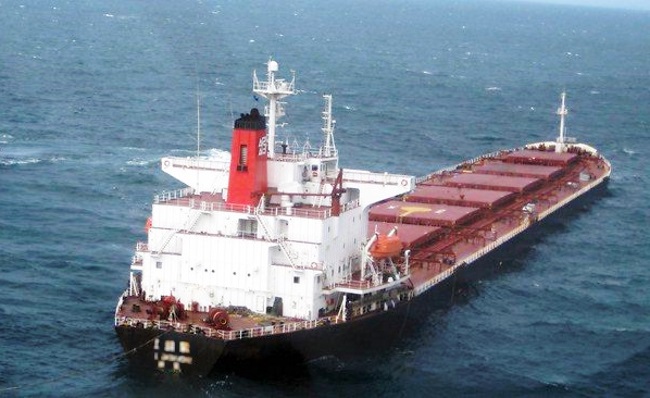 Meanwhile, GMS, the world’s No1 cash buyer of ships, said in its latest weekly report on the demolition segment that “markets remain positioned some ways away from their recent peak with different factors affecting each location, and this is subsequently pulling prices across the board, lower by the day. As it stands, the markets need a week (or two) of stability, in order to bring some confidence back to the buying again. Nervous end users are increasingly adopting the “wait-and-watch” attitude rather than offering / committing on the multitude of high priced Cash Buyer vessels being paraded in the markets. As such, we certainly anticipate some hefty losses being incurred for those involved. Bangladesh is currently faced with a chronic financing problem due to an extreme shortage of U.S. Dollars in the country, resulting in very few open end Buyers who have the ability to open fresh LCs, particularly on some of the favored large LDT units being offered. Unfortunately, the competing Indian and Pakistani markets are unable to pick up the slack as sentiments and pricing remain comparatively sluggish in both countries. Pakistan has had to endure a multitude of issues – from a suspension of high rise building projects (leading to reduced demand for steel), to recent currency depreciations, to ongoing political turmoil and finally, cheap Chinese and Iranian billets flooding the country. India on the other hand continues to face its weekly share of volatility on local steel plate prices, although the currency has improved of late, finishing the week in the mid Rs. 70s against against the U.S. Dollar. On the far ends, while China remains suspended in inactivity, the Turkish market faced an unexpected crash in local steel plate prices of its own this week. As such, prior high priced indications are no longer valid and levels are expected to take a tumble in the coming week”, GMS concluded.

Previous: MRV and DCS: On track for greener shipping
Next: Tanker Market Rates 28/11/2018