Ships’ recycling activity should pick up in the coming months, in order for the freight market to recover in the long-term. However, this hasn’t been the case so far in 2019, with many owners opting to hold on to their older vessels, with dry bulk rates and most recently tanker rates recovering, especially since the summer. In its latest weekly report, shipbroker Clarkson Platou Hellas said that “there has definitely been a shift in the right direction in relation to sentiment this week following encouraging signs from the waterfront as demand for tonnage is finally reported. Whilst Pakistan remains the dormant ship recycling destination, the recyclers from Bangladesh and India have reportedly stepped on the throttle and awoke from their slumber as they are now actively looking to purchase again. As the last few months failed to develop any continuous purchasing prowess, yards in these areas have become empty and thus, it was a matter of time before demand to buy returned. Whilst many in the market are suggesting price levels have improved significantly, we need to actually see some concluded sales to determine the true indicative rates and exact market position. There remain many units in cash buyer’s hands (previous acquisitions) that have to be resold, and therefore another indicator that the market rates have improved are whether these cash buyers can finally free themselves of these tonnage in hand”. 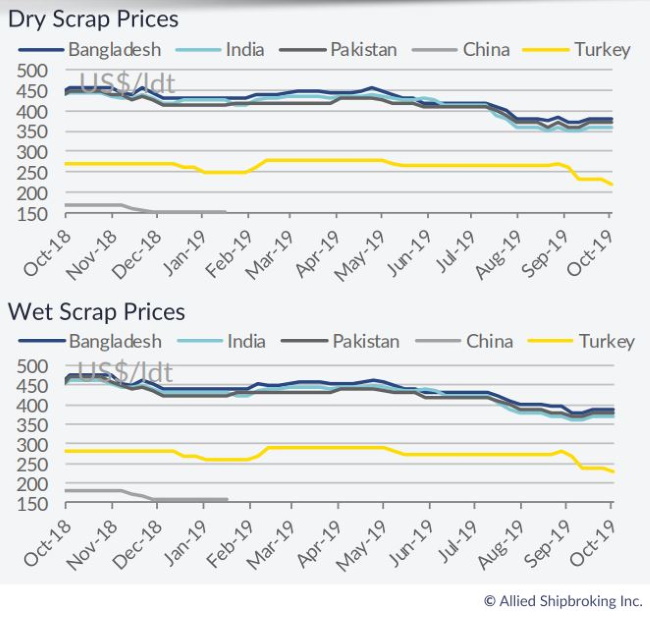 In a separate note, Allied Shipbroking added that “despite the lack of fresh reported transactions noted last week, some first signs of increased appetite amongst breakers has started to surface, especially in Bangladesh, a market that has monopolize cash-buyers interest in the year so far. Some fresh interest from container and tanker owners is expected to materialize over to deals soon, given the improvement in market conditions and the increased offered prices seen from local players. On the contrary to this, interest for Indian breakers remained subdued despite the increased offered prices noted there too, with Bangladesh showing a hefty premium and attracting most tonnage for the time being. However, with the market firming in Bangladesh, it is anticipated some excess demand will spill over to the Indian recycling yards as well. Finally, things seem to remain unchanged in Pakistan, where scrapyards continue to offer relatively unattractive prices while little appetite seems to be emerging from most of the local breakers for the time being”. 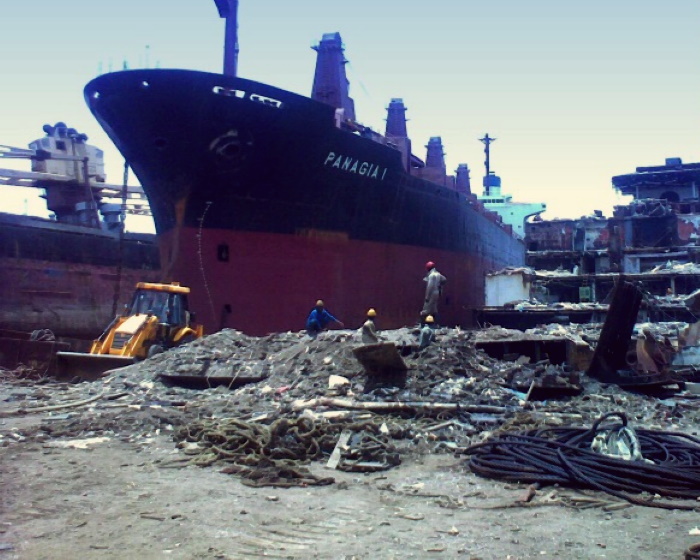 Meanwhile, in its latest report, GMS, the world’s largest cash buyer of ships said that “green shoots of recovery have been evident in the subcontinent markets over the past week or so – particularly in Bangladesh, where a number of (premium) sales have taken place that breached the USD 400/Ton mark, giving a real sense of encouragement to Ship Owners, Cash Buyers (still with expensive inventory on hand) and End Buyers, who have remained on the sidelines for the most part. Notwithstanding, there remain very few fresh candidates available for sale, as freight markets push on across all sectors, leaving any available scrap tonnage (especially non-green) heading to Chittagong shores at present. Overall, India remains the lowest and most unfavorable destination at present, with End Buyers lacking any sort of aggression or interest to purchase, as they have been presenting lowball / opportunistic offers for vessels mooted to be heading their way. As such, it seems unlikely that India will get their hands on fresh units any time soon, with only eight vessels beached over the month of September (including small LDT tugs and supply vessels) – reportedly, the lowest number in almost 10 years! Pakistan too has stayed in its shell, with minimal interest and risible rates (reflective of India), as they prefer to ‘wait and watch’ market developments, following a halt to Iranian scrap imports, which should (hopefully) see optimism flood back to this market. However, what they are ‘waiting and watching’ for is quite the mystery, as they have not secured any serious tonnage for well over a year now! Therefore, with demand and pricing finally starting to get back on its feet in Bangladesh and a dwindling supply of vessels (despite 2020 just around the corner), it is hoped that competing markets in India and Pakistan may start responding to this long overdue recovery”, GMS concluded.
Nikos Roussanoglou, Hellenic Shipping News Worldwide