Demolition Activity Subdued Due to Holidays in Southeast Asia

The ship recycling market had a subdued week, as a result of the Diwali celebrations. In its latest report, shipbroker Clarkson Platou Hellas noted that “the lights from the Diwali celebrations have shone brighter than the recycling market this week with, not surprisingly, little activity witnessed. As most of the Indian sub. Continent took time out to celebrate the annual festivities, the lack of tonnage continues to ensure that we should see price levels maintain their firm position, most likely, through to the end of the year. Bangladesh has once again shown improvements in their rates and look set to jump ahead of their counterparts from India once again. Pakistani recyclers also have confidence in their domestic market with price levels competitive to elsewhere, however only concern remains the volatility of the local currency which could halt any further steps forward. Looking further west towards Turkey, slot availability continues to cause some concern for those units requiring dismantling in accordance with the EUSRR (European Union Ship Recycling Regulation) laws. There are still several cruise ships being dismantled that were acquired towards the end of last year and there seems to be a continual supply of semi-submersible units, all of which require recycling at EU approved recycling yards. In addition to several tankers on these specific yards, currently very large LDT units are being dismantled at these Turkish EU approved yards so therefore, the time to recycle the vessels takes much longer and subsequently, we see a longer time for slots to free up on these yards. At present, openings for new units to be delivered to these EU approved yards look to be commencing from beginning December 2021 to January 2022”, the shipbroker concluded.

In a separate note, shipbroker Allied Shipbroking said that it was “another week of a relatively uninspiring flow of candidates being sent to be recycled, with the overall supply of tonnage remaining problematic at the same time. This also deductible by the very high offered scrap price levels across the Indian Sub-Continent, with buyers in the region remaining hungry (and bullish) for any and all available large LDT unit. The recent negative corrections in the dry bulk freight market (especially in the bigger size segment) has nourished somehow the expectations for any increase in number of vessels being pushed towards this direction. 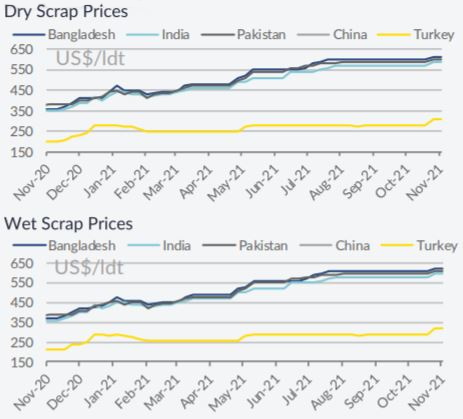 On the other hand, the tanker market is moving in the opposite direction, given the improvement in both earnings and overall sentiment, having derailed the supply levels available to the ship recycling market. All-in-all, with fundamentals in both local steel prices and currencies remaining on the positive side across the main demo destinations, it is yet to be seen if we are about to witness firmer activity levels take shape in the upcoming period”, Allied concluded. 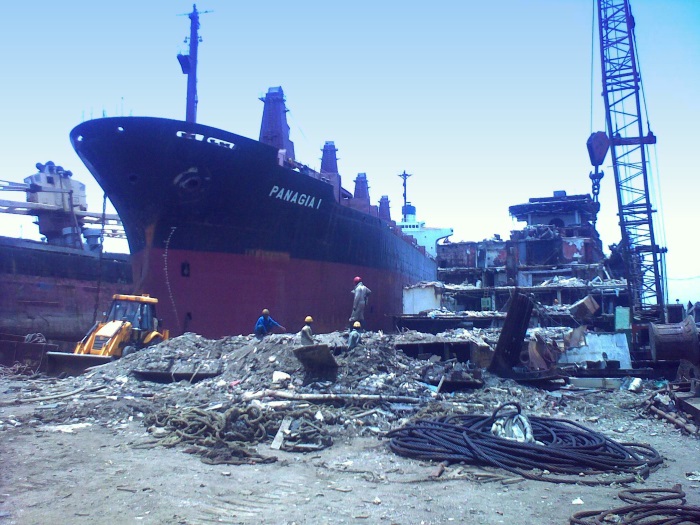 Meanwhile, GMS , the world’s leading cash buyer of ships said this week that “sub-continent markets remain high overall, as they enter the final months of the year and yet, the paucity in the overall supply of vessels indicates that bullish Recyclers have been unable to get their hands on any meaningful tonnage. Cape Rates have come off spectacularly over the past few weeks and as such, there may (finally) be a few Ship Owners who may reconsider scrapping their vessels (in this category) rather than passing further surveys. Tanker chartering rates have also started to stabilize somewhat, and as such, there may not be the deluge of vessels in the coming weeks, in comparison to as many that have been traded in the recent past and specifically from this sector. With the firming rates, Vessel Owners may choose to keep their vessels for a possible rally rather than cashing in at an early stage. This is certainly something of a surprise to many in the industry given that recycling levels are at the highest they have been since the sky-high days of 2008, when USD 800/LT LDT was breached. Diwali holidays have also stifled some of the progress from India this week, yet, fundamentals across the sub-continent markets remain in positive territory overall – as both steel prices remain firm and currencies (except in Turkey) relatively stable. Bangladesh and Pakistan continue to compete on geographically positioned large(r) LDT vessels and several FSUs have been committed from existing Cash Buyer inventories over recent weeks. Finally, the Turkish market spent another slow week, despite firming prices, stronger local sentiments, and a Lira that continues to languish at record lows against the U.S. Dollar”, GMS concluded.
Nikos Roussanoglou, Hellenic Shipping News Worldwide

Previous: Dry Bulk Freight Rates Have Been Hammered Down Lately: What’s Going On..?
Next: China’s zero-Covid strategy will cause its economy to slow down further, economist warns

Four inefficient shipping regulations that no one talks about