Things have slowed down in the demolition market for yet another week in 2021. In its latest weekly report, shipbroker Clarkson Platou Hellas said that “with little tonnage to engage buyers again this week, and the Monsoon season in the sub-continent now in full throttle, sentiment has slowly started to waiver and left any Sellers still seeking to dispose of their tonnage chasing the market down. We are not at any major correction, but there is definitely a feeling of a lesser appetite being felt from Buyers as an air of caution creeps in. Steel prices globally show no sign of slowing down, and we expect further gains to be made as the steel demand from Asia increases further as the World slowly recovers after the Coronavirus Pandemic. Whether the market can reach the dizzy heights of USD 600/per ldt remains to be seen, but no attractive units on a delivered basis have been dangled in front of the end recyclers at present to test their resolve.

These strong numbers, coupled with the very low earnings on offer, have started to make Owners for vintage Tanker units particularly apparent in the MR sector. We have already seen 15 units sold and expect over 30 to now be sold before the end of the year and there are no signs of vessels in this area slowing down and makes it potentially one of the busiest sectors in the industry for units to be sold for recycling. Despite the low earnings, Owners have also had to decide on vessels with upcoming SS/DD positions which have the added cost of fitting BWTS and the environmental enforcements coming over the next 5 years, placing pressure on selling their non-environmentally friendly older units. It remains to be seen how much longer Owners in the other tanker sectors can hold on before they too start to provide the well overdue supply to the recycling market”. 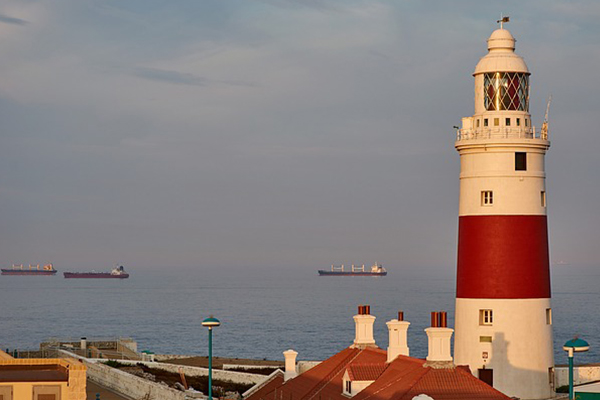 In a similar note, Allied Shipbroking said this week that “there is now a slight skepticism surrounding the recent spikes noted in scrap price levels, given that many market participants already thinking about the seasonal monsoon slump. In the Indian SubContinent, Bangladesh seems to be slowly losing ground against competition from Pakistani breakers, especially for the larger LDT units. Moreover, the stringer flow in recent concluded transactions, has left local demand unappeased for the time being. Pakistan, on the other hand, is on an improving mode as of late, with the current concluded tonnage capacity showing a increasing appetite. Finally, in India, there is a lot of uncertainty surrounding the local market. The problematic conditions due to Covid-19 has discouraged many in considering Alang as a good option, despite the recent increases noted in local steel price levels. In the Med, things remained overall stable in Turkey, with the local currency though still being under ample pressure”. 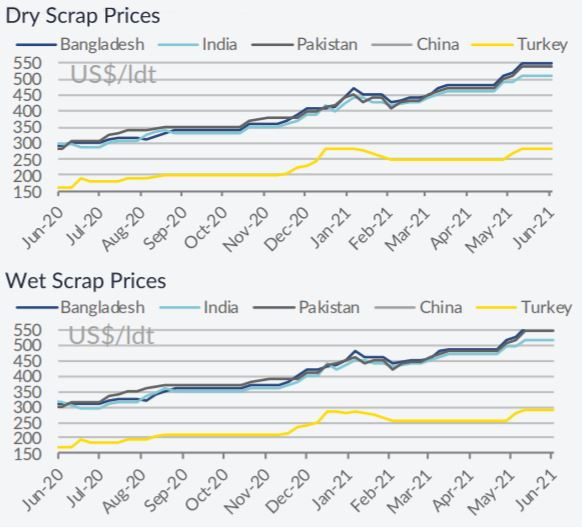 Meanwhile, GMS , the world’s leading cash buyer of ships, said that “a greater degree of caution seems to have entered the market this week, both on the Cash and End Buyers sides, as some of the more bullish offerings seen over the past few months begin to gradually subside. Forward steel prices seem to suggest a decline over the summer / monsoon months and along with upcoming budgets in both Bangladesh and Pakistan, this is sure to put a damper on some of the overzealous numbers seen recently.

On the far end, Turkey remains steady, however, with a weakening Lira, there are increasing fears of possible declines in levels in the coming week(s). Covid-19 continues its unstoppable surge across India and the sub-continent, as well as resurfacing virus mutations across Asia and Europe once again, as any hopes of a swift end to this pandemic saga are highly unlikely, despite the increasing rate of global vaccinations. This means crew repatriation in sub-continent locations (with certain crews not being allowed) and ‘as is’ take overs (especially in the Far East) have become increasingly challenging as borders close and restrictions increase at present. However, there are positive signs on the horizon as demand into all locations remains good, and a recent slowdown in tonnage means that fewer vessels are being offered for sale into a market that is still holding steady and the lack of supply can only mean increased demand and steady / firmer prices”, GMS concluded.
Nikos Roussanoglou, Hellenic Shipping News Worldwide