A renewed sense of sentiment direction could emerge over the course of the next few days, after the latest developments, with regards to the latest budgetary impact on the shipbreaking industry in Southeast Asia and more specifically Bangladesh.

According to its latest weekly note, GMS, the world’s leading cash buyer said that “the much anticipated Bangladeshi budget was announced on the 13th of June and at the time of writing, local pundits were still combing through the fine print to see if any of the anticipated hikes on taxes / duties had indeed been levied upon the industry. Certain end Buyers have been playing scare tactics in the lead up to the budget, warning that prices could fall by as much as USD 50/LDT, in the event punitive taxes were imposed upon the steel sector (as per the rumors circulating in the market). The Bangladesh Shipbreaker’s Association (BSBA) is a powerful lobby within the country and if any serious changes were to occur in the budget, those in the government in Dhaka will likely be approached by the BSBA, in an effort to reverse any such negative decisions. In the early post-budget news forthcoming from Bangladesh, while a net increase of about BDT 5/LDT (approx. USD 0.6/LDT) on scrap vessels is being reported, billet & commercial scrap import duties in addition to yard VAT are reportedly unchanged. However, the VAT circular has yet to reach the concerned local department at the time of writing. On the other side, India has endured a woeful time of steel depreciations with about Rs. 1,500 (appriximately USD 21.50/Ton) lost over the last couple of weeks, following the euphoria of Mr Modi’s recent re-election victory. Pakistani struggles also continue, particularly on the currency, which has touched another historical high of PKR 158 against the U.S. Dollar, in further worrying news for this market. Lastly, The Turkish market re-opened post-Eid with little fanfare as steel plate prices remain unchanged and the Turkish Lira marginally weakened as the working week concluded”, GMS noted. 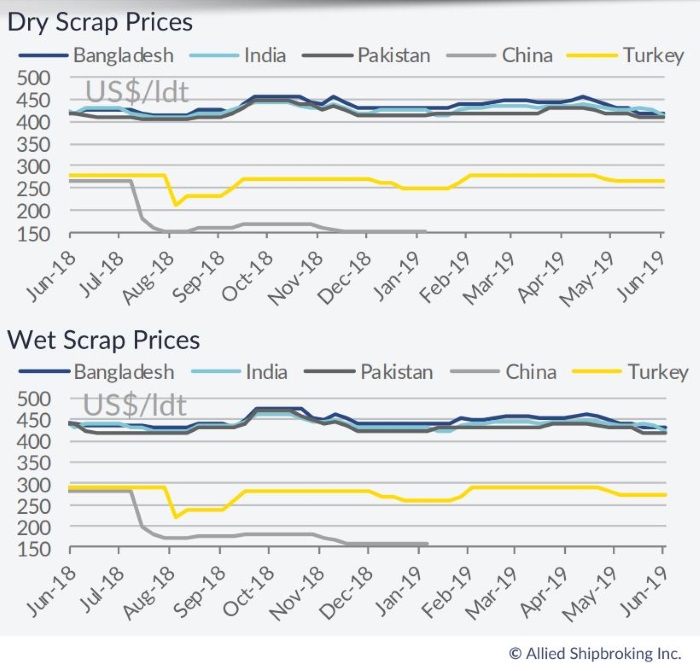 Similarly, in its latest weekly report, shipbroker Clarkson Platou Hellas said that “all eyes have been on Pakistan, and in particular, Bangladesh this week with the Budget announcements keeping everyone in the industry on their toes as the respective Government unpredictability led to various rumors circulating in the market, often scaremongering and resulting in buyers reluctant to offer for available units until a definite position is known. The actual outcome will not really be known until possibly Monday as to what implications these budgets will have had on sentiment, and price levels, but the initial indication is that there will be no change in Pakistan but in Bangladesh, some additional duties have been implemented, however this may not affect the recycling industry in Chattogram as negatively as the rumors suggested prior to the announcement. In respect of the increasing improvements being made towards the ship recycling facilities in Alang, India, we would like to take this opportunity to congratulate a new milestone in India, where the recycling facility ‘Y S Investments (Plot 59)’ became the first yard in India to be given a statement of compliance towards the Hong Kong Convention by ‘Lloyds Register’. Furthermore, they have even received the independent verification (IV) towards EUSRR from Lloyds Register – in our opinion, this is very encouraging for India in the long pursuit of a facility being certified by the E.U. and what will provide European Owners with greater opportunities to recycle their vessels. Whilst more yards in Alang are being inspected by the EU, unfortunately we do feel it will still take some time before any approvals are awarded”, Clarkson Platou Hellas said. 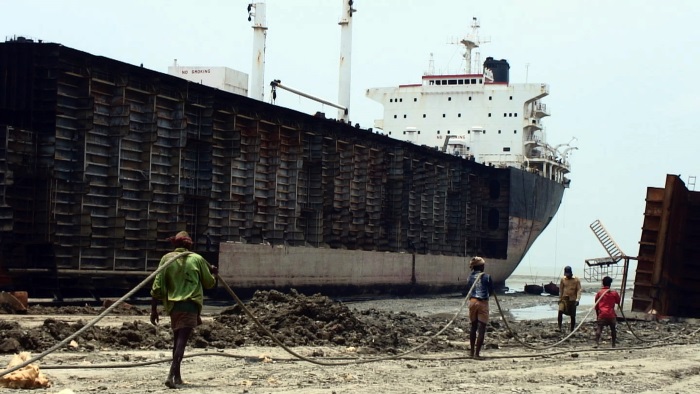 In a separate note, Allied Shipbroking added that “a lack of heartbeat was witnessed in the demolition market, portrayed by the minimal reported sales during this past week. The determination of budgets in Bangladesh and Pakistan had been the main focus points of late and while several rumors have been circulated, no firm news have yet to emerge. In Bangladesh though, the impressively active 1st quarter has led most of the breakers to have amassed excess stockpiles, which along with the recent holidays and the approaching monsoon period have eased back buying interest significantly. In India, the recent local steel price slump has restrained further appetite for fresh deals. On the other hand, Pakistan seems to be almost completely inactive right now, leaving Indian breakers to be the only strong contenders and grabbing the lion share in this small market “pie”. Meanwhile, concerns in Pakistan regarding the status of the recycling industry are mounting after the recent budget announcement there, as rumors are implying that the negative aspects of the budget are more than the positive ones”, the shipbroker concluded.
Nikos Roussanoglou, Hellenic Shipping News Worldwide