A usual trend has been emerging of late in the demolition market, with more ship owners hesitating to sell their older carriers for demolition, after the recent rise in dry bulk rates. However, even before this, 2019 has been a lackluster year for ship recycling activity. In its latest weekly report, shipbroker Clarkson Platou Hellas said that “there has been a return in what can only be described as skeptical optimism this week from owners as a variety, but limited, of tonnage have come fresh for sale creating some interesting competition amongst a range of Buyers. This has occurred from Buyers who normally have limited resources starting to show themselves on tonnage that they may have turned away from before. However, this still has not materialized into an active market as evidenced by the lack of sales below, continuing the trend since the start of the summer and which looks set to continue throughout the European Summer holiday period. It seems the uncertainty from the Bangladeshi budget a couple of weeks continues to rumble on with conflicting rumors still circulating around the market, thus making it difficult to gauge the actual truth. This has left cash buyers puzzled, as well as end recyclers, as they try to calculate their risk and work out where the true market lies. This has meant that vessels with a longer laycan are the most attractive giving the Cash Buyer more time to speculate on a position when the vessel delivers, as well as seeing the full effects of the budget”. 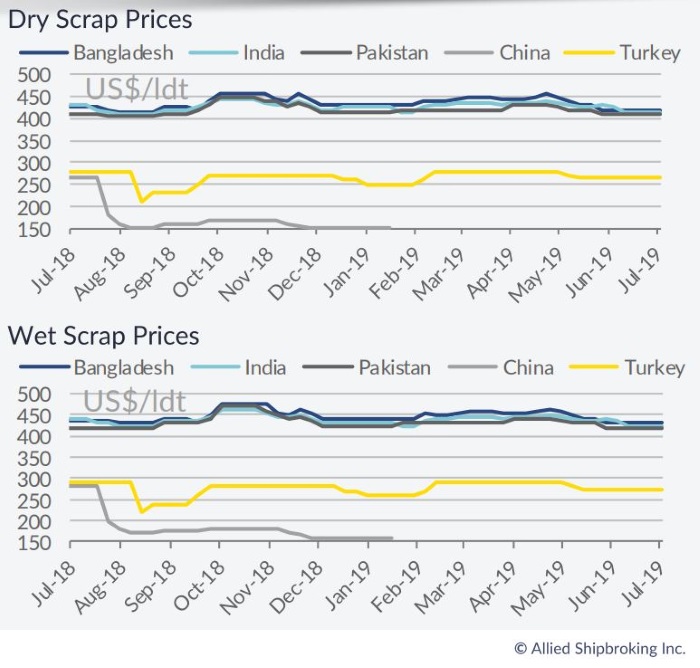 In a separate note, Allied Shipbroking added that “the ship recycling market remained quiet for yet another week, with just a handful of units being concluded for scrap the last couple of days. In India, it was a rather difficult week, with local steel plate prices easing back considerably, leaving limited room for local recyclers to offer higher levels. In Bangladesh, despite the better sentiment that has been brought on by the possibility of a tax hike, most local breakers seemed to be busy with the amassed tonnage stockpile they have, while it seems unlike that they will push things further any time soon. Finally, Pakistan remains in clampdown mode, given the turbulent scene noted in their local currency and will most probably take some time before any sort of balance is restored. With all being said, the summer period is expected to be relatively quiet, while things from the side of freight rates will also play an important role, likely acting as a further deterrent to seeing a fair number of demo candidates come to market”. 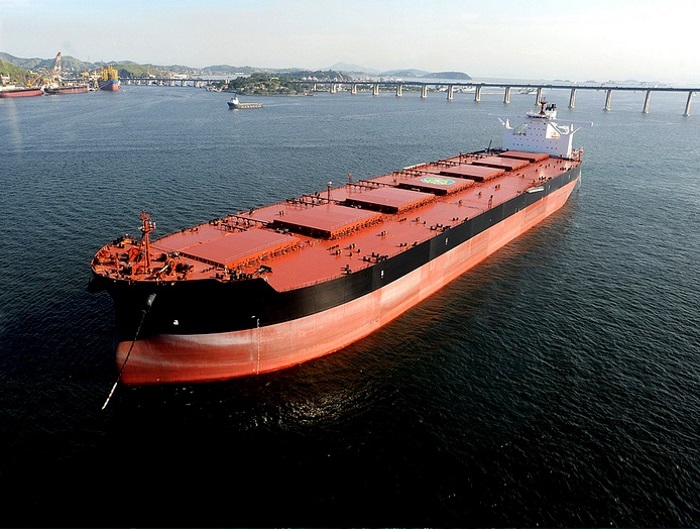 Meanwhile, GMS, the world’s leading cash buyer added that “inclement weather has put much of the activity in the subcontinent markets on hold this week, as Bangladesh and Pakistan continue to digest and challenge the latest outcome of their respective budgets and India continues to battle the outcome of its volatile steel plate. However, the facts remain that prices have overall declined by about USD 50/LDT from the peaks seen earlier this year and a far quieter summer / monsoon period is subsequently expected across the subcontinent markets, whilst these new realities sink in. Meanwhile, the flow of tonnage into the market has also slowed considerably over the summer months and this has allowed a stuffed Bangladeshi market, the time to digest much of the large LDT & expensive tonnage beached here during the first six months of the year, before (hopefully) returning to form in the fourth quarter of this year”.

GMS added that “in India, Steel prices continue to endure a mercilessly rough ride, once again losing almost USD 12/LDT off their value this week, whilst the Pakistani Rupee has (overall) suffered catastrophic depreciations, wiping off about 20% of its value within the last 12 months alone. All of this, even before the impact of the 2019 Pakistani budget can be taken into account, whereby Gadani Ship Recyclers have seen an increase in sales taxes and the PSBA has subsequently been challenging Government for a reversal of the same – albeit, with little success thus far. Notwithstanding, all of their efforts may likely not yield much of a difference, given that their prices are currently positioned some ways away from their subcontinent counterparts. Bangladesh meanwhile, seems better equipped to challenge the recent imposition of the 10% VAT from its recent budget, with the powerful BSBA lobby already working hard to get this reversed and some signs of progress were reportedly witnessed this week”, it concluded.
Nikos Roussanoglou, Hellenic Shipping News Worldwide

Jet Fuel Comes into Contention for the Product Tanker Market

Greenfield container port projects back in favour with terminal operators