The current freight rate crisis across most markets could offer a solid opportunity for ship owners to sell some of their older ships and alleviate tonnage oversupply issues. However, over the course of the past week, prices offered by scrapyards have also started to retreat. In its latest weekly report, shipbroker Clarkson Platou Hellas said that “the market has been awash again this week with varied large dry units being circulated and, not surprisingly, sales concluded earlier in the year are now surfacing showing the full extent of the busy start to the year in this sector. Interestingly, this week we are seeing alternative types of tonnage filtering through and resulting in Buyers taking their pick of their preferred choice, dependant on their current requirements. It has been sometime since the market has felt this busy after what was a depressing 2019 for the industry and provides further optimism that 2020 could potentially reach dizzy heights. Many Owners are not hesitating in disposing of their vintage units due to the continued depressed freight market, which in the short term has no clear outcome on when it will bottom out. This has been further compounded by the ‘Coronavirus’ outbreak from China, which is now swarming through the Far East and some parts of Europe. With ports now placing restrictions on vessels coming in and out of China, as well as trade routes and deliveries in the region, this could have a further downward impact on the freight market and sentiment as a whole. This could in turn, cause more vessels to come for recycling and provide the industry with a rush of tonnage not seen since the early months of 2018, when many feel the market was last at its most prominent. Going under the radar was the budget in India this week, where it seems to have been a stable one for the industry with no change and no impact on duties or any other forms of Tax – a welcome relief for end users and the domestic steel mills in the country. The one positive feedback emanating from the area was also that more infrastructure projects were outlined by the Government, which are the bedrock and necessity for the market to thrive. It is hoped that this will continue the momentum of positive sentiment currently being witnessed and help keep the market firm for the foreseeable future”, the shipbroker said. 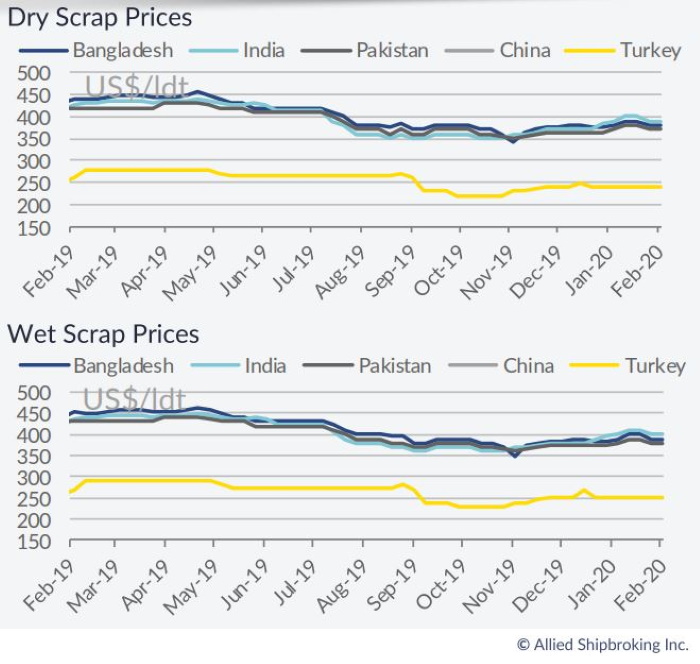 Meanwhile, in a separate note, Allied Shipbroking added that “with freight earnings having slid in some case and on some sectors to unviable levels and with sentiment amongst owners having deteriorated severely during the last few weeks, breakers have been able to attract some fresh tonnage this past week. Meanwhile, as there are few signs of an improvement in the near term, it is expected that owners will likely resume offloading their vintage units. What makes all this more noteworthy is that this elevated volume and intense interest has been seen in the market were offered prices are still below the US$ 400/Ldt mark. In Bangladesh, a new series of units has been secured, adding to an already busy program for the local breakers. However, the recent decrease noted in steel prices has pushed some owners to look to alternative destinations. India was able to attract only a part of this excess flow during this past week, while also being hampered by a decline in both steel prices and adverse forex movements. Meanwhile, the Pakistani market has been brought back to life with fresh tonnage being snapped up, after a prolonged period of inactivity. The deteriorating fundamentals in Bangladesh and India has been a golden opportunity for the local breakers in Pakistan to return back into the game and at fairly competitive levels”. 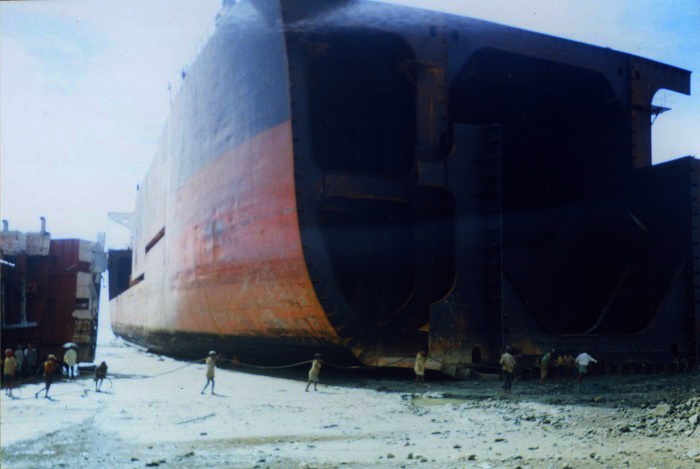 Meanwhile, GMS, the world’s leading cash buyer of ships said in its latest weekly note that “shaky fundamentals, not only in the freight markets, but also the overall international economy, have finally started to seep into the recycling markets this week, with falling steel plate prices (in India and Bangladesh), nervy offerings, and troubled deliveries of late. The world, and shipping markets in particular, are still trying to come to terms with how to deal with the fallout from the ongoing Coronavirus threat that has surpassed both SARS & MERS and the Indian and Bangladeshi markets are currently not permitting Chinese crew to disembark at their respective recycling locations on government orders. Perhaps a forced period of quarantine may have to ensue, even if the crew displays no signs of having contracted the virus”.

GMS added that “this has tied in with some of the ongoing market malaise as steel prices have declined by about USD 18/Ton in India over the course of two weeks (halving the USD 35/LDT gains made over the previous month) and many End Buyers are simply waiting-and-watching before offering on fresh tonnage, perhaps (rightfully) fearing further falls ahead. Bangladesh has (once again) seen an extraordinary volume of large LDT tonnage head to Chattogram shores over the previous month, as a majority of the approximately ten Capesize Bulk Carriers and VLOCs have ended up in Chattogram. As such, open and capable End Buyers with ready-to-establish L/Cs are naturally starting to dwindle once again. This is placing a downward pressure on prices, given the nearly crippling over-supply of vessels that are coming daily into the market, amidst increasingly dire freight rates. Overall, it really is time for the Pakistani market to finally stand up and be counted, but every time a competing market corrects, thereby giving Gadani Buyers a chance to secure tonnage, they seem to conveniently lower their numbers in response, citing one excuse or another as to why it is not feasible for them to compete, thus leaving this market empty handed on serious tonnage once again (as it has been for the past two years)”, GMS concluded.
Nikos Roussanoglou, Hellenic Shipping News Worldwide