The monthly record-setting streak that U.S. container import volumes have been posting since mid-2020 came to an end this August. While the August number was down slightly compared with the same month in 2021, it remained above 2.5M TEUs, which is still quite high and above the level that has caused port congestion and delays for the last 18 months. A number of factors, such as a slowing economy, inflation and high fuel costs, still have not had the anticipated impact of slowing down U.S. container imports. The combination of increased import volumes from China, persistent delays at major East and Gulf Coast ports and the high number of ships waiting off those ports continues to put pressure on supply chain predictability. The August update of the logistics metrics Descartes is tracking continues to point to congested and challenging global supply chain performance for the rest of 2022. 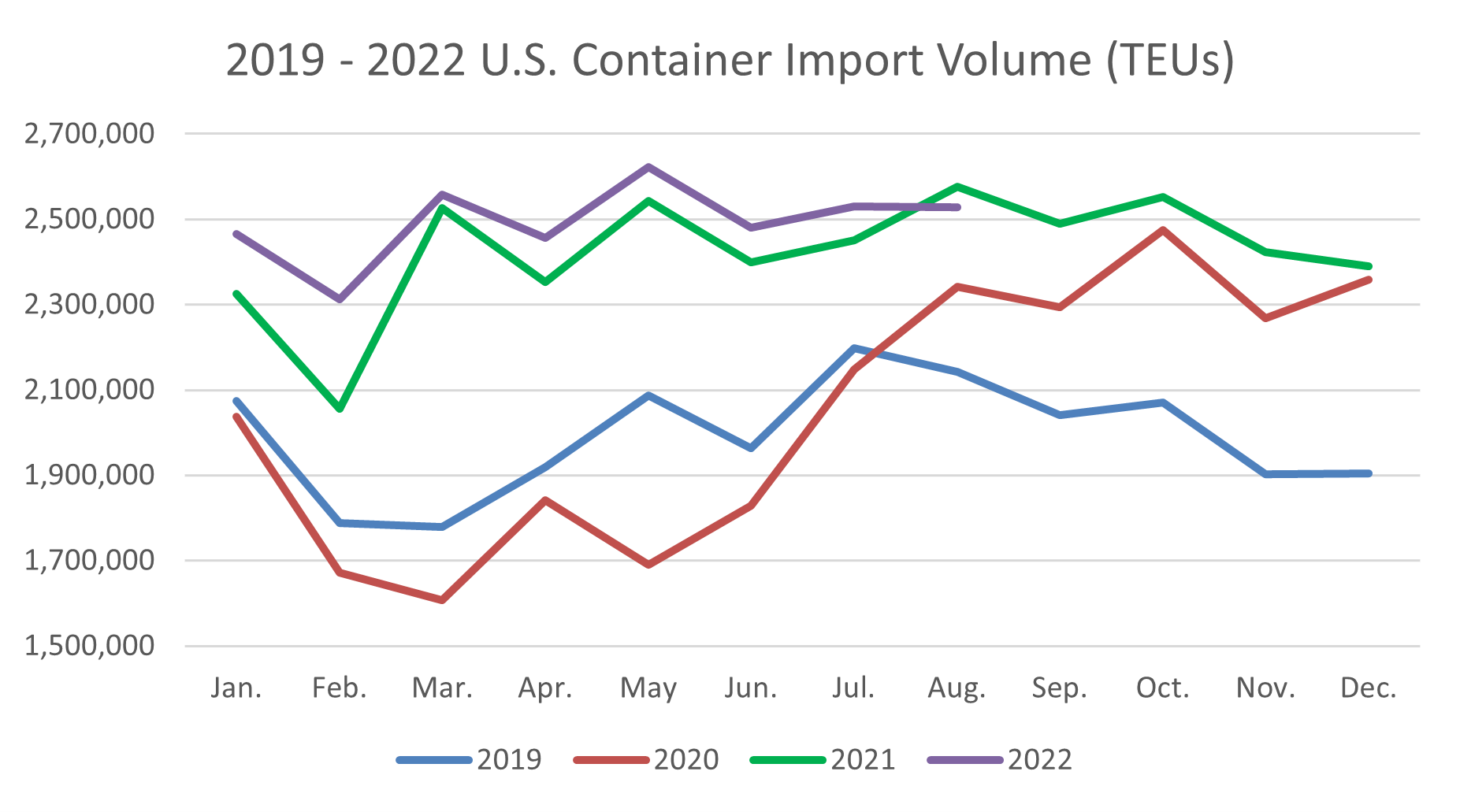 Looking at five-month periods (see Figure 2), the top West Coast ports (orange), with the exception of Seattle, experienced container throughput shifts to other ports, including the East and Gulf Coasts (blue). The Port of New York/New Jersey retook the top spot at 451,190 TEUs in August 2022, up ~41,000 TEUs compared with July 2022. The Port of Los Angeles dropped considerably and came in second at 409,933 TEUs and down ~71,000 TEUs versus July 2022. Long Beach was third, up slightly in August by ~8,000 TEUs.

Part of the shift to East Coast ports can be attributed to the growth of Chinese imports and shippers’ decisions based upon last year’s West Coast port congestion. Of the increase in Chinese imports in August 2022 versus July 2022, the Ports of Norfolk, Charleston and New York/New Jersey saw 32.5%, 16.2% and 15.8% growth, respectively. The Port of Los Angeles saw a 16.7% decline, which explains to a great degree why the port’s overall import container volume was down so much.

The labor situation remains the same and presents continued risk to port operations. The International Longshore and Warehouse Union (ILWU) contract expired on July 1st; however, business has proceeded as usual with the union working with management. There has been no impact on container processing as has been the case in the past. California law AB5 still remains a significant issue with no resolution in sight and there is a risk that more AB5-related stoppages could occur in other California ports in the future causing greater disruption. The labor uncertainty could be a significant reason why import volumes are not shifting back to major California ports despite their situation improving.

The potential impact of a slowing economy, peak season, inflation and fuel costs are all clouding the view of future import volumes. Despite gross domestic product shrinking for the second quarter in a row, the U.S. economy remains relatively strong. The August Jobs Report was again stronger than expected at 315,000 more jobs filled than anticipated and unemployment inched up to 3.7% due to 344,000 more people seeking work versus July 2022. The impact of peak season demand on container import volumes is unclear as August container import volume was flat versus July and China posted record container volumes into the U.S. Additionally, potential container import volume dampening high inflation rates remain high with the Consumer Price Index increasing slightly by 0.1% to 8.3%. According to the U.S. Energy Information Association, gasoline costs, a significant contributor to high inflation rates, dropped as much as $0.36/gallon in August, but diesel remained stable at $5.12/gallon. Both are still high and likely to remain elevated for the foreseeable future given the disruption of global energy markets as a result of the Russian invasion of Ukraine and subsequent sanctions on Russia.
Source: Descartes