deugro moved four LNG tanks with a unit weight of 225.4 metric tons and dimensions of 48.93 x 5.8 x 6 meters from the manufacturer’s yard in Decin, Czech Republic via the Port of Hamburg, Germany to the construction site in the Caribbean Sea.

The project was executed in close collaboration between deugro’s offices in the USA, the Czech Republic and Germany. It was originally planned to commence the transport of the LNG tanks in Decin in December 2020, but challenging weather conditions led to an adjustment of the execution plan for safe marine transit. With only 90 centimeters instead of the required 1.90 meters, the water level of the Elbe River was too low for any barge transport. deugro was required to quickly arrange a secure storage area at the quay near the Port of Rozbelesy, Czech Repulic to temporarily store three LNG storage tanks until the water level of the Elbe River was sufficient.

“The overall timing for the crane and barge arrangements was crucial to ensuring a smooth and final barge loading operation. Managing the timing of the barge arrivals in Hamburg with the arrival of the US-flagged, multi-purpose heavy lift vessel in Hamburg in order to avoid barge and or vessel detention was equally challenging,” said Jens Klie, Vice President, deugro USA.

The initial leg of the transport included a three-kilometer road transport journey from the manufacturer’s premises through Decin’s city center to the Port of Rozbelesy in Decin, requiring local movement permits to be obtained and implemented.

The transport route had to be completely closed off by the traffic police, streetlamps as well as further road furniture dismantled, and overhead wires adjusted to accommodate the size of the loaded trailer convoy. The tanks were moved at a walking speed of a maximum of five kilometers per hour by two prime movers and a specialist 22-axle hydraulic platform trailer configuration, separated in two 11-axle units, each equipped with a turntable. 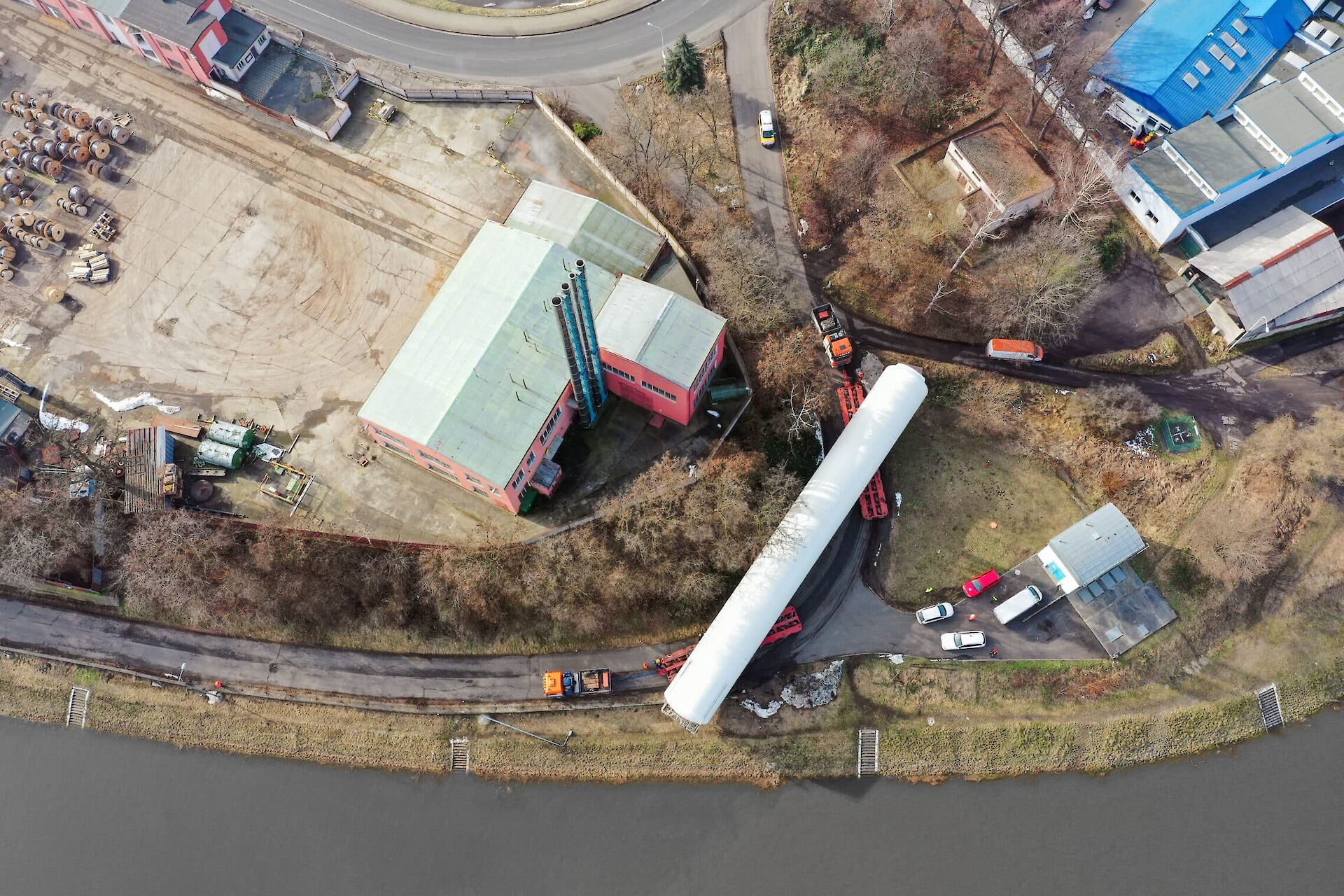 The tank’s voyage began with a 3-kilometer road transport from the manufacturer through Decin’s city center to the Port of Rozbelesy.

At the Port of Rozbelesy, the barge loading operations were executed directly from the trailers onto four barges, one for each tank. After altogether two days of loading and cargo securing, the barges were ready for their voyage to the designated terminal in Hamburg, Germany, with the four river barges connected and then pushed by a tugboat in twos.

The barges left the Port of Rozbelesy and after eight days and over 536 kilometers of river transit, the LNG tanks arrived safely at the Port of Hamburg, Germany. Under personal supervision from dteq Transport Engineering Solutions, a company of the deugro group, the direct transshipment from the floating barges onto the multi-purpose heavy lift vessel was executed. All units were loaded in tandem lift using the vessel’s on-board cranes. Two of the 48.93 x 5.8 x 6.0-meter LNG tanks were loaded under deck and the other two were positioned on the weather deck.

“Operation-specific toolbox talks with all parties involved is mandatory, in order to clearly define the different steps of the operation, the responsibilities and the line of communication to reduce the potential risks for such operations to a minimum,” said Felix Kok, Regional Head of Transport Engineering EMEA, dteq Transport Engineering Solutions.

After two days of loading, the cargo securing was safely and successfully completed, and the vessel was ready to set sail for the 17-day ocean voyage to its destination in the Caribbean Sea.

“Despite adverse weather conditions, flexibility, detailed timing and the close cooperation and communication between deugro, the client, dteq and all subcontractors led this project to a successful conclusion,” added Jens Klie, Vice President, deugro USA.
Source: Port of Hamburg