Although the notion of a ship in the middle of the ocean being disabled by a software malfunction or by hackers was initially greeted with considerable scepticism and denial, a spate of incidents, including most notably an attack that disrupted operations at Cosco, has transformed attitudes. Today the maritime industry acknowledges the potential dangers and is taking steps to address cyber risk at various levels.

Cyber security is a moving target. Threats continue to grow in reach and complexity, with new vulnerabilities discovered on a seemingly daily basis. In the space of a few years, hacks and security breaches have jumped from being an exceptional event confined to a special breed of technology companies to becoming a fact of life-impacting everyone. No industry is immune.

While in earlier decades office IT systems were the predominant target, these days more incidents are affecting operational technology (OT) – the programmable control systems responsible for operating machinery. The trend reflects the growing complexity of such systems and a general increase in connectivity, which in turn increases the attack surface of a vessel.

This increase is borne out in the statistics: The number of attacks on OT in 2016 was double that of the preceding year and quadruple the 2013 level. So whereas before it was mostly a company’s finances and reputation that were at risk, now the threat has escalated to confront the safety of life, property and the environment. The stakes are much higher. For this reason cyber security must now be considered an integral part of overall safety management in shipping and offshore operations.

Fortunately industry policymakers have not been asleep at the wheel. Last year saw two particularly significant milestones in the regulatory environment. A section dedicated to maritime security – including cyber risk – was introduced in the third edition of the Tanker Management Self Assessment (TMSA), which came into effect in January 2018, as well as in the seventh edition of the Vessel inspection questionnaire (VIQ7) from the Ship Inspection Report Programme (SIRE), effective from September this year. Because TMSA and SIRE are imperative to gaining charters, tanker operators now have a commercial incentive to demonstrate they have given systematic consideration to potential vulnerabilities and implemented appropriate mitigations and safeguards to address them. 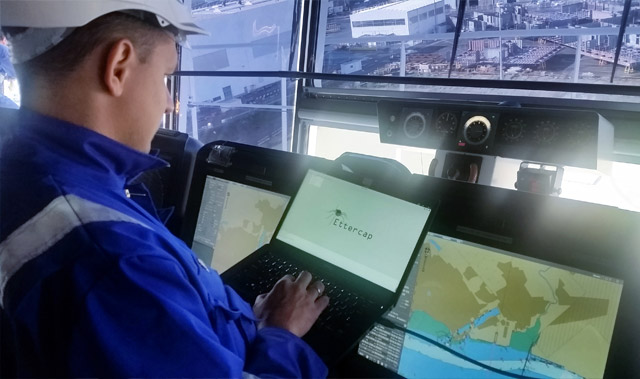 Software installations and updates should be left to an IT expert, following thorough testing

Managing cyber risk is ultimately no different to managing any other risk, remarks Patrick Rossi, DNV GL’s Maritime Cyber Security Service Manager. “The equipment and terminology may be unfamiliar and somewhat daunting but the approach is fundamentally the same as, say, preparing for and carrying out hot work modifying a vessel’s structure.”

Software changes, for example, should not be done on a whim, which can often happen on ships. Because IT engineers don’t frequently visit vessels, when they do come aboard to update the ECDIS or set up the latest version of a maintenance management application, the temptation is to be helpful. They click to install a new service pack and a backlog of other app updates. Nine times out of ten, this is fine. But occasionally it can disrupt settings elsewhere on the system. Moreover, the consequences won’t become apparent until long after the engineer has left and the ship has set sail.

Instead updates should be carefully planned, tested, approved and recorded. They should be categorized as minor or major to ensure personnel with the appropriate authority can approve them. This, Rossi says, is virtually identical to the process for gaining approval prior to carrying out welding.

If there was one positive outcome of the NotPetya ransomware attack on Maersk last year, reasons Rossi, it was awakening owners and operators to the fact that cyberthreats are not hypothetical. “Today there is much greater awareness of the real-world implications and acceptance that cyber risk has to be tackled.”

However, shipowners and operators are at different stages on the learning curve in formulating a response, he observes. “Some are bewildered by the scale of the problem and don’t know where to begin; others have introduced some countermeasures but are uncertain whether they’ve covered everything they need to cover.”

In its role as a classification society DNV GL has adapted and expanded its cyber security services to assist owners and operators in protecting their assets against evolving threats and ensuring their safeguards satisfy new industry rules and regulations.

DNV GL now provides services for educating and raising the awareness of all stakeholders both on shore and at sea; assessing and implementing defensive and reactive countermeasures; and monitoring and reviewing the effectiveness and robustness of barriers with an emphasis on continuous improvement

These services are purposely designed to be non-system specific so as to work equally for conventional IT and industry-specific operational technology, which is important when systems are interlinked. This also avoids obsolescence. While the consequences of an OT outage are likely to be more serious, they can often be traced back to a weakness in IT systems, particularly if they originate from an external source.

In September 2016, DNV GL published a Recommended Practice (RP) to educate shipowners and operators on how to deal with cyber risk. “It was designed to demystify a subject the industry was still getting to grips with. We took care to write it in a maritime language and context.”

The focus was on practical steps, stresses Rossi. “Most advice coming from industry bodies at the time, while produced with noble intentions, was very high-level. Our idea was to close the gap between theoretical concepts and the real world.” For example, DNV GL’s RP accounts for common constraints such as limited budget and resource availability. The core approach is to identify weaknesses, assess their severity, then prioritize the most serious ones. The RP has been released as a free resource.

The next step for vessel operators would be to carry out a cyber security assessment. DNV GL can support this by sending interdisciplinary teams to help onshore and offshore personnel identify and address specific business risks.

Once countermeasures and a new risk management regime have been implemented, they can be followed up and qualified by penetration testing. “Testing the robustness of barriers is essential to ensure that assets are secure and nothing has been overlooked,” explains Rossi. In this process, authorized “white-hat” hackers do their best to compromise the IT and OT defences to validate that safeguards work as they should and risks have been eliminated.

This was accomplished by introducing defined risk handling and accommodating procedures to all stakeholders in the project – not only the owner and yard but also the vendors. Incorporating technology and systems from third-party suppliers unavoidably adds complexity to a project and, from a cyber security perspective, increases potential exposure to malevolent actors. Meanwhile, shipyards are as much on the learning curve as vessel owners.

“For a large, sophisticated vessel like a cruise ship, which is dependent on technology for both operational and hotel needs, collaboration is absolutely critical,” Rossi stresses. “Cyber risks are multifaceted. The response has to mirror that. Everyone has to be involved in the conversation, because, as the saying goes, a chain is only as strong as its weakest link.”

The feedback from the project, he notes, was overwhelmingly positive. “Tackling cyber security right from the beginning of a vessel’s life cycle enables stakeholders to take a proactive, rather than reactive, approach to the problem. It provides more opportunities to insert barriers.”

Based on these advisory services, DNV GL has developed its first class notations covering cyber resilience. The Cyber Secure notations have three qualifiers: Basic, Advanced and “+”. Basic is primarily intended for ships in operation; Advanced is designed to be applied throughout the newbuilding process. The ‘+’ qualifier is available for systems not covered by the scopes of Basic and Advanced. 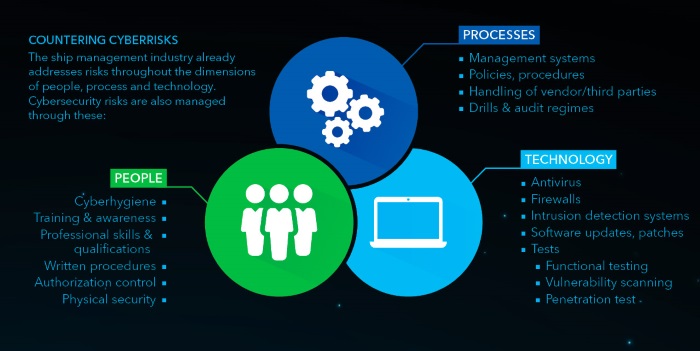 Countering cyberrisks – The ship management industry already addresses risks throughout the dimensions of people, process and technology. Cybersecurity risks are also managed through these

Of course, cyber security is not just a matter of firewalls and antivirus software. Up to 90 per cent of incidents are attributed to human behaviour. Phishing and social engineering, unintentional downloads of malware etc. remain common issues. At the same time, most crews and onshore staff are not taught how to respond to cyberattacks or major technology failure and consequently fail to contain the damage.

DNV GL has therefore expanded its options for training through its Maritime Academy. Courses cover cyber security from both management and technical angles and even include lessons in hacking to give participants an insight into how cyberattackers operate. Additional new tools incorporate friendly phishing campaigns and simulations of other social engineering techniques as well as features for assessing staff alertness so customers can fine-tune the level and frequency of cyber awareness training.

DNV GL can help vessel operators combine traditional IT security best-practices with an in-depth understanding of maritime operations and industrial automated control systems. DNV GL understands the importance of tackling and integrating the human factor when devising and implementing a cyber risk management strategy because ultimately, it is people who drive our industry.
Source: DNV GL