The digitalisation of ports and terminal operations offers ways to realise a “fourth industrial revolution”, bringing with it safety, operational, and environmental benefits, delegates heard at the Port Equipment Manufacturers Association annual general meeting, which was held in the Spanish port city of Bilbao.

“With the necessary ambition among PEMA members, everybody can be best in class in improving safety, driving efficiency, and reducing environmental impact,” PEMA president, Ottonel Popesco, told AGM delegates.

Digitalisation themes that were explored during presentations included artificial intelligence, data management, cyber-physical systems, and interoperability between layers of IoT platforms – all of which are emerging as ways to improve container throughput at ports and terminals.

One of two opening speakers, José Llorca, Chairman of Puertos del Estado, stressed the importance of digitalisation in the ports sector, saying that it was: “crucial to the quality and efficiency of services, and to align [the sector] with the industrial revolution 4.0.”

Speakers and delegates cautioned, however, that inertia in the ports and terminals sector threatened to stymie its development.

During the procedural session of the AGM, the candidacies of Jon Sojo, Export Director, Tratos and Pietro De Michieli, COO of Bedeschi, to join the PEMA governing board for three-year terms were unanimously approved.

Sojo and De Michieli replace Michael Dempsey and Maurizio Bragagni who stepped down after the completion of their three-year tenures. Prior to the Board Elections, Bragagni, made a heartfelt speech to the General Assembly, thanking them for their support and announcing that he would not stand for re-election. Bragagni will, however, continue to play an active role in the Association.

It was also announced that Fae Brennan, PEMA Head of Administration, will replace Jon Sojo as the Chair of the ‘Communications, Events & Educational Programmes’ (CEEP) Committee. Established last year, the CEEP Committee combines the works and aims of the previous ‘Special Events, Programmes & Education’ and ‘Communications & Industry Relations’ committees. In 2018, CEEP Committee members will continue to develop PEMA’s meetings and educational initiatives. 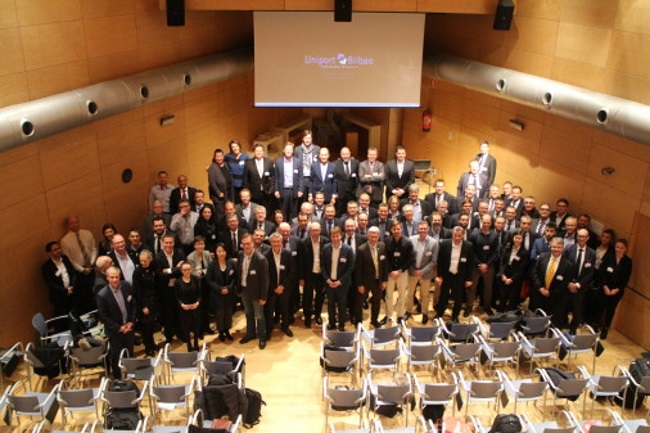 The Association’s membership totalled 106 member companies as of January 31, 2018, delegates were told.

“With our growing membership, and increasingly diverse range of activities, PEMA is better-positioned than ever before to ensure that the port equipment and technology sectors have a clear, unified voice in the industry,” Popesco said.

Progress updates were also provided on PEMA’s growing range of industry initiatives and outreach activities. For example, the Association’s 2018 Student Challenge will challenge entrants to develop a comprehensive business plan to reduce emissions and increase productivity at the environmentally friendly port of the future. The final brief, and competing academic institutions will be published later in the spring.

The Association is also set to launch a brand new website in the coming weeks.

The conference, held at the Maritime Museum in Bilbao, was kindly hosted by UniportBilbao. The opening day of the meeting, again sponsored by UniportBilbao, saw guests welcomed with a museum tour and boat trip to the Port of Bilbao, where Capt. Javier López, Chairman of the Maritime Cluster, spoke about the history of the local maritime industries.

After the AGM, guests were invited to an exclusive dinner, kindly hosted by Vahle, where Vahle CEO, Achim Dries, made a welcome speech and thanked Members for their continued support.

PEMA is pleased to have the participation of guest speakers, Iván Deosdad, Xavier Pascual, Boris Wenzel, Lamia Kerdjoudj-Belkaid and Richard Brough and would like to thank them for their valuable contribution. PEMA extends special thanks to José Llorca, Chairman of Puertos del Estado, and Arantxa Tapia, Minister of Development and Industry, Basque Government for their opening presentation and to Felipe Jaber Bringas and Asier Atutxa of UniportBilbao for closing the conference.

The PEMA AGM 2018 was kindly hosted by UniportBilbao.

PEMA member meetings are held twice a year, including the AGM that is usually held in the first quarter of the year. Committee members and the PEMA board also meet separately during the year. PEMA will be present at TOC Europe in Rotterdam in June, and its next Autumn Members meeting will be held in Hong Kong on October 9 to 11, 2018.
Source: PEMA