With seasonal spot prices of liquefied natural gas at the cheapest in a decade, some utilities in the biggest buyer are considering burning more of the fuel instead of coal, according to people with knowledge of the plan.

Japanese power generators have started discussions with traders about sourcing additional LNG imports from the spot market to help boost their gas use, the people said, asking not to be identified as the information isn’t public. The plans, which would require lowering run rates at coal plants while raising them at gas-fired facilities, haven’t been finalized and would likely only be implemented through the rest of this year, they said. 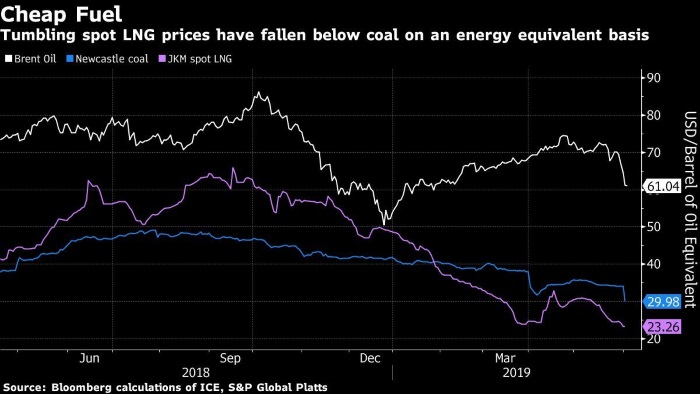 Utilities in Japan rarely switch from coal to gas because the work needed to re-configure their generation mix requires sustained lower LNG prices. But an opportunity has opened as the nation is sitting on sufficient inventories while tepid seasonal demand and an onslaught of new global supply has driven down spot LNG prices in north Asia.

The potential short-term switch contrasts with deeper inroads gas has made in the U.S., which has caused some coal plants to permanently shut, or Europe, where swapping the fuels can be done relatively quickly.

Japan’s power mix already includes a large amount of gas, which fired about 40% of electricity output compared with 30% for coal, according to industry data. And because of ongoing uncertainty over the future of its nuclear power sector — which accounted for 7% versus more than a quarter before the 2011 Fukushima disaster — the country’s gas importers have long-term contracts for more LNG than they can likely use.

The nation’s coal-fired plants are expected to run at 73% of capacity this year, compared with 48% for natural gas, according to March forecasts by Japan’s Organization for Cross-regional Coordination of Transmission Operators.

The LNG Japan/Korea Marker, the benchmark for prices in Asia, has plummeted to $4.26 per million British thermal unit as of Monday, according to assessments by S&P Global Platts. While prices drop annually during the weak shoulder demand period in spring, they’ve fallen to the lowest for this time of year since 2009.

Utilities could use so-called ‘downward quantity tolerance’ clauses in their long-term supply deals to take fewer cargoes, which would then allow them to dip into the spot market and benefit from the weak prices. Those long-term supplies more than twice as expensive as spot cargoes, according to data from the Ministry of Finance, as they’re mainly priced to crude oil. Power generators could also drain LNG stockpiles now by boosting gas-fired output, then purchase replacement cargoes from the spot market that would arrive a few months later.

To be sure, spot coal prices have also slumped and it could be difficult to forecast which fuel type is cheaper going forward, some of the people said. Front-month Newcastle coal futures, a benchmark in Asia, have dropped about 28% since the start of the year and are currently trading at a 2-year low.
Source: Bloomberg