Rune Nygaard, Business Manager Ventures in Wilhelmsen Marine Products’ recently established Open Innovation division says, “Our system is tried, tested and proven at sea, but we understood that Type Approval was an absolute necessity, and so we initiated this process with DNV GL. This took a lot of work, but we now have a Type Approved system for automated testing and dosing of boiler water chemicals on vessels.”

He adds, “In addition, having Wilhelmsen approved as a service supplier on behalf of DNV GL, as part of their BMON+ program would constitute a great benefit to our customers. They could have less frequent class inspections and therefore a lot more flexibility, on top of a better boiler protection”.

Dramatically reducing the inherent risks associated with poor boiler water management, Wilhelmsen’s system monitors boiler water condition and doses the required amount of chemicals as and when they are needed. Delivering real-time condition monitoring, key boiler water data is accessible to both the vessel’s crew and onshore staff, via a custom-made online portal.

Wilhelmsen’s system is an ideal fit as it complements the enhanced approach towards boiler management advocated by the DNV GL BMON class notation. Aiming to negate the risk of corrosion and poor boiler water quality caused by inferior maintenance, more than 250 vessels have been granted DNV GL’s BMON classification since 2012. A DNV GL report published in September 2018 found that not a single vessel with the BMON notation had reported any significant boiler condition issues.

Hamid R. F. Farahany, from DNV GL – Maritime says, “We are very pleased to have worked with Wilhelmsen on both the Type Approval and the Service Supplier approval. By obtaining these approvals, Wilhelmsen are demonstrating that they have met a set of independently developed and verified quality standards. Having a type approved system in place that monitors and maintains key parameters while documenting them digitally, reduces the inconsistencies introduced by the human factor. Combined with the certainty of follow up using a DNV GL approved service supplier, this can only build confidence in the benefits of this new approach. This is especially important as one of the key aspects of the BMON notation is an enhanced approach to boiler water management. Reducing the probability of corrosion, scaling and contamination is also expected to generally support the safe operation of boilers.”

Tested and refined over the past four years, onboard eight working vessels, Wilhelmsen’s development partners have played a pivotal role in the development of the system. Endorsing Wilhelmsen’s concept from the very beginning, Hapag Lloyd have been utilizing the Digi Boiler system for more than two years, aboard their pilot vessels. 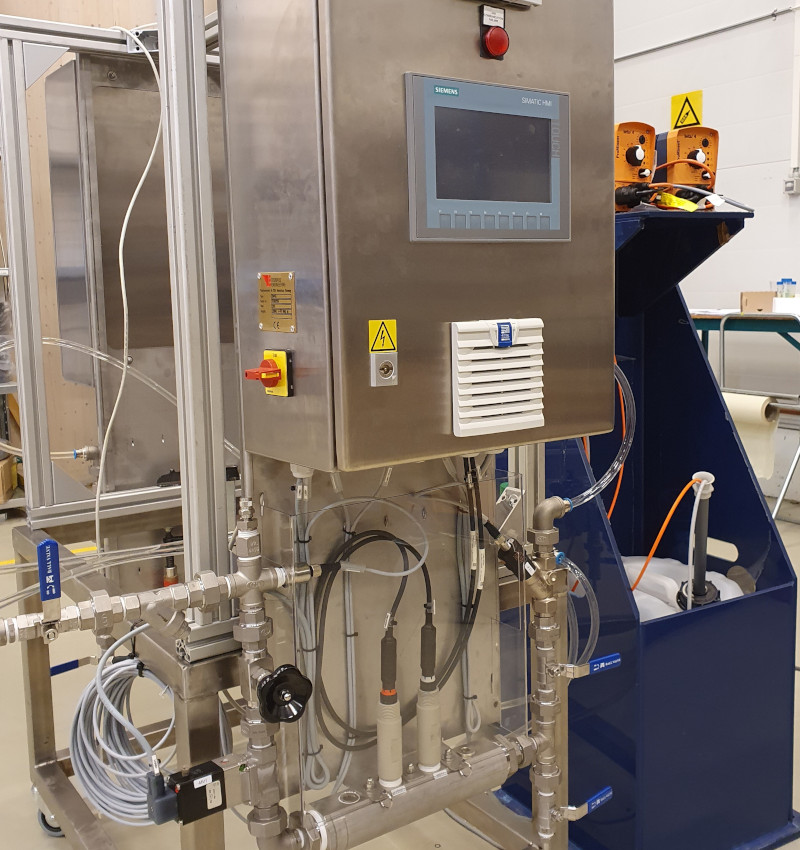 Hapag Lloyd says, “We are always looking for ways to further improve our vessel operations and we instantly saw the inherent value in Wilhelmsen’s Digi Boiler system. Refined and adjusted over time based on our, and others direct feedback, the now type approved system is the final word in boiler water testing and dosing”.

Now in its third and final iteration, following the transition from a working prototype, limited to development partners to a tried, tested and type approved system, Digi Boiler is now available to the wider market. The next phase of installations is in progress with a wide variety of customers recognizing the inbuilt cost and efficiency benefits of automated boiler water maintenance. Offshore floating platform supplier and operator Modec is one such customer.

André Maurício Araujo Borges, Chemical Applications Coordinator, Modec says, “Ensuring uninterrupted, consistent performance of the boiler systems aboard our Floating Production Storage and Offloading vessels is absolutely critical for us to be able to deliver safe, efficient round the clock operations. We have evaluated and concluded that Wilhelmsen’s Digi Boiler system provides that piece of mind, accurately monitoring and consistently dosing water treatment chemicals as and when they are needed. Adding, “We are working in system implementation on board, looking to have it running there soon!”

The Digi Boiler system is based on an automated test and treat methodology controlled by pH, ORP and conductivity for boiler water control in combination with temperature, pressure and flow for sample consistency and safety. With the ship to shore communication enabling remote surveillance and support through the new Digi Boiler platform, this new technology provides optimum boiler protection.

Boiler manufacturer Alfa Laval’s perspective on boiler water condition is that it is of outmost importance. Alfa Laval says, “At all times the boiler water quality must be kept stable and handled correctly in order to optimize the performance of the boiler and to protect the boiler throughout its lifetime. There are different ways to keep the boiler in good operational conditions and the Digi Boiler solution from Wilhelmsen will be one that is interesting to follow.”

Partnering with Rainmaking Innovation for the past year to spin-out and scale-up existing Wilhelmsen solutions, Digi Boiler is the first project to benefit from this collaboration. Developing a new company to launch and deliver the system at scale to the wider market, Havtec, part owned by Wilhelmsen and Rainmaking is based in Singapore and led by CEO Raoul Wijgergangs.
Source: Wilhelmsen