FX Positioning: Back to pre-pandemic

CFTC data on G10 FX speculative positioning show markets turning increasingly bullish on the dollar in September. The aggregate USD net long positions against reported G10 currencies (i.e. G9 excluding SEK and NOK) were worth 10.8% of open interest as of 28 September, the highest since the last week of February 2020 (before the Covid-19 spread started to seriously hit financial markets).

Unlike back in February 2020, when the EUR was in oversold territory, the common currency had – as of 28 September – about the same amount of long and short positions, as speculators continuously unwound their net EUR/USD long positions after these peaked at 24% of open interest in January 2021. The EUR long trimming accelerated this summer, as markets turned more hawkish on the Fed and the spread of the Delta variant increased the risk of more setbacks in the global recovery.

Recently the headwinds to global risk sentiment stemming from China’s troubled real estate market have added to bullish sentiment on the dollar as a safe-haven currency. As shown in the chart above, USD aggregate positioning is now above its 2-year average, but still inside its 1-standard-deviation band, indicating that USD net longs aren’t yet overstretched.

Stark divergence between AUD and NZD positioning
Looking at the other major currencies, GBP positioning is in line with EUR positioning, while the yen remains deep in oversold territory. The recent rise in US yields suggests we could see more bearish sentiment building up on the JPY, even more so when considering that the JPY net short positioning is within its standard-deviation band.

CAD experienced some meaningful short-squeezing in the week ending 28 September – likely helped by rising energy prices – but remains in oversold territory. We expect more tapering by the Bank of Canada to support the Canadian dollar into year-end, and the short positioning may help limit the loonie’s downside. 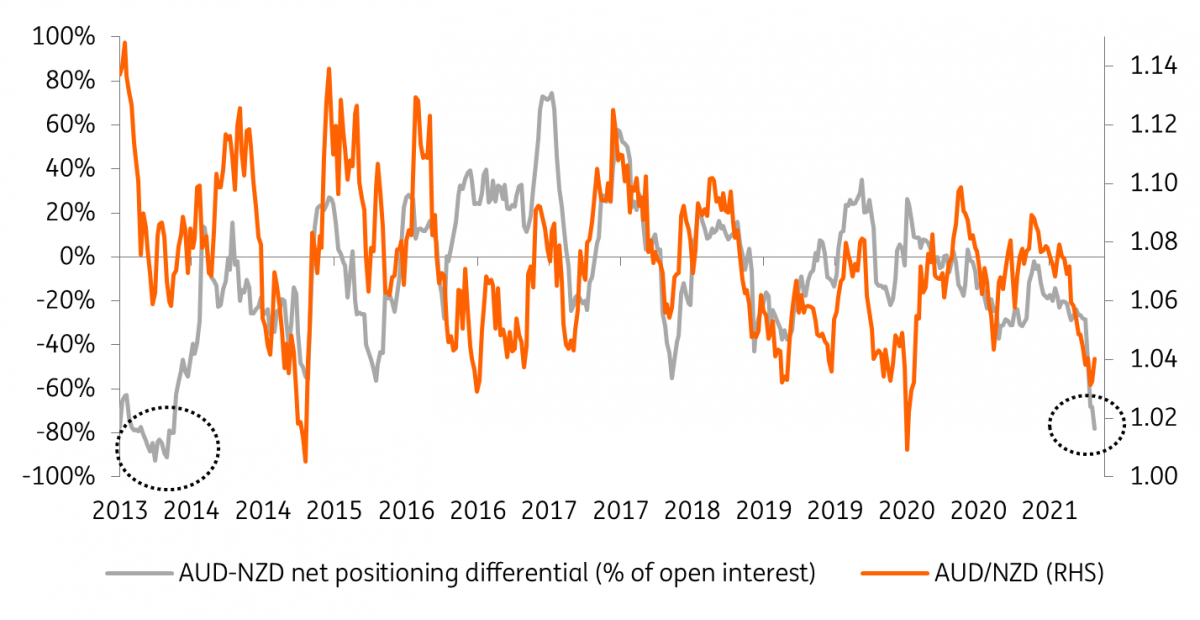 The antipodeans are displaying a stark divergence in positioning. As shown in the picture below, the difference between AUD net positioning and NZD net positioning (expressed as % of open interest) is the most negative since 2014. Interestingly, back in early 2014 AUD/NZD was not as low as it is now, suggesting the positioning is now quite in line with the spot market.

Indeed, weakness in AUD/NZD has recently been warranted by the diverging paths of local central banks. The RBA has remained dovish while the RBNZ has ended QE and is now about to start tightening. Also, Australia faced a more serious Covid crisis this summer, and AUD also had to discount the drop in iron ore prices. Very recently, the sharp increase in energy prices has supported AUD/NZD, as Australian export prices for coal and natural gas rose significantly. We think this has started to cause some unwinding of AUD/NZD net shorts. More signs that energy prices will remain elevated could jeep supporting the highly oversold AUD against the overbought NZD.
Source: ING