The dollar nursed losses near a one-month low on Wednesday as strong demand at a U.S. bond auction fuelled a widespread drop in Treasury yields, reducing the interest rate advantage the greenback held over other major currencies.

April has been a month of “mean reversion” trades among major currencies with the yen and the euro recovering most of their sharp losses sustained in March. Even commodity currencies including the Aussie and the kiwi dollar have bounced strongly.

Compounding the dollar’s losses has been a broad pick-up in inflationary pressures that showed U.S. consumer prices rising by the most in more than 8-1/2 years in March at 2.6%.

But that pick-up has failed to translate into expectations of an acceleration in policy tightening and on the contrary has boosted demand for U.S. debt as investors bet inflation pressures are transitory.

“The Fed’s continued commitment to loose monetary policy remains a key assumption behind our view that it is still too premature to expect a sustained U.S. dollar rally at the current juncture,” MUFG strategists said.

Federal Reserve Chair Jerome Powell was scheduled to speak later on Wednesday at the Economic Club of Washington; his comments on inflation will be keenly watched as he had previously said higher pressures in the coming months would be transitory.

The dollar was particularly vulnerable against the yen and the euro, with the single currency threatening to rise above the psychologically important level of $1.20 for the first time since early March.

“Increasing vaccination trends in April and May will likely give a further boost to the euro/dollar exchange rate,” said Vasileios Gkionakis, head of FX strategy at Banque Lombard Odier.

Elsewhere, the New Zealand dollar rose 0.8% to a three-week high at $0.7110 after the country’s central bank held its official interest rate and asset purchase programme steady, as expected.

The Singapore dollar rose 0.25% to S$1.3376 after the Monetary Authority of Singapore (MAS) left its exchange-rate policy settings unchanged.

In cryptocurrencies, bitcoin touched a record high of $64,895 ahead of the listing of cryptocurrency platform Coinbase on Nasdaq later on Wednesday. 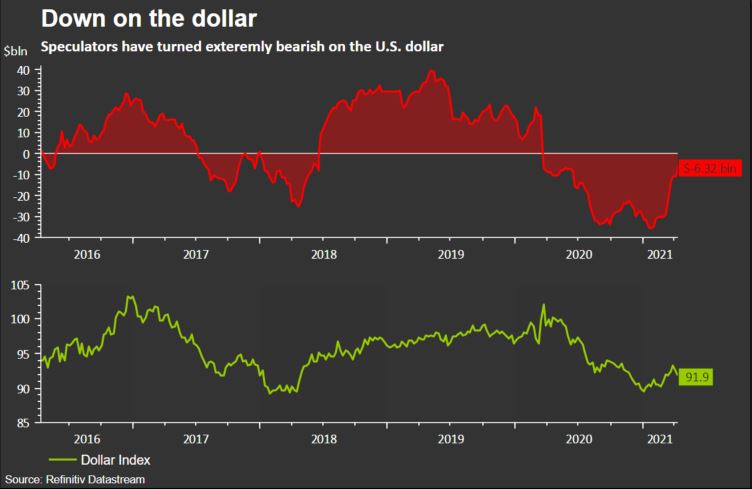