High commodity prices and Russia’s invasion of Ukraine have called into question the UK’s reliance on energy imports. In response, the UK government is set to unveil a new ‘energy security strategy’. In its latest report ‘How much more oil and gas can the North Sea produce?’ Wood Mackenzie examines the levers the North Sea can pull to increase production and argues indigenous oil and gas still has a major role to play.

According to Wood Mackenzie, UK demand for oil and gas will continue to outstrip supply but there are wide ranges of uncertainty. In 2030, production will be between 0.6 million barrels of oil equivalent a day (mmboe/d) and 1.6 mmboe/d; the range for demand is even wider.

Neivan Boroujerdi, Research Director, North Sea Upstream for Wood Mackenzie said: “By 2050, UK North Sea production will have largely ceased. But even in a net zero scenario, demand will persist with emissions being offset by carbon capture and storage (CCS) and nature-based solutions. Current levels of production could be maintained for the next decade, underpinning energy security and safeguarding jobs. But the UK is sorely lacking in gas and will be heavily reliant on imports in all scenarios.”

The report sets out five levers to boost production: execution, new greenfield projects, increasing recovery from existing assets, exploration and the development of contingent resource. If all economically viable resources were to be produced, this could deliver 5 billion boe of new volumes and US$60 billion of investment. 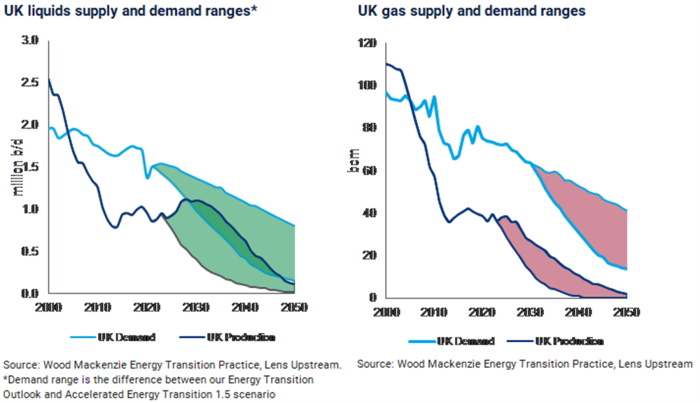 Greenfield projects like Cambo and Rosebank offer the most immediate upside, but some require finance or a change in ownership.

“While the industry has been provided a lifeline, it needs to step up. All stakeholders need to promote a culture of transparency, and a streamlined – and stable – regulatory and commercial environment,” Boroujerdi said.

Boroujerdi said: “With demand set to persist, new developments are compatible with the UK government’s target of reaching net zero by 2050. But while UK oil and gas has lower carbon intensity than some alternatives, high prices look set to extend output from late-life infrastructure, meaning emissions reduction goals will become harder to meet.

“Continued decarbonisation of the shelf – including electrification – is required to ensure alignment between energy security and a net zero future.”