Dozens of ships carrying coal and iron ore to China are stuck outside ports waiting to unload, according to shipping data, with traders saying harbour authorities are taking longer than usual to clear the imports with customs officials.

Refinitiv data showed on Friday that more than 300 dry-bulk freighters in total are currently sitting idle, waiting to deliver into China. While dry-bulk ships carry many different commodities, most affected were those carrying coal and iron ore from Australia, according to the data and two bulk traders.

While some congestion is normal, especially as China heads into a market shutdown for its week-long Lunar New Year holiday, a ship broker and bulk trader said the backlog had swollen significantly over the past week as dozens of new ships arrived while far fewer cleared customs.

Two traders, who mostly deal with Australian coking or thermal coal, said several of their ships had been delayed clearing customs.

“We don’t know why…but there has definitely been a significant slowdown in clearing customs, especially for Australian coal,” said one of the traders.

The ship broker, bulk and coal traders all declined to be identified citing company policy. They said they had not been notified of any restrictions on coal imports, nor any reason for the slowdown in customs processing.

Officials at China’s customs administration did not immediately respond to Reuters’ requests for comment via phone or fax.

The ports most affected by the slowdown are Dalian, Huanghua, Jingtang, Lanshan, the Ningbo and Zhoushan zone, Qingdao, Qinhuangdao, Shantou, and Yingkou, according to the Refinitiv data.

Two port officials, one at Shantou and the other at Dalian, who both declined to be named, said they had received no notices on coal import restrictions.

While China’s upcoming holiday is universally observed and will effectively halt most business in the world’s second-biggest economy for a week, traders said it should not have affected customs this week or last.

Market watchers predicted that in the event of prolonged delays in processing imports at ports, domestic coal prices could rise.

In thermal coal, Chinese coal futures fell early in January but have risen by 5 percent since their Jan. 7 low, to 592.4 yuan (67 pounds) per tonne. Chinese coking coal and iron ore futures have also been rallying as reduced imports tightened the domestic market. 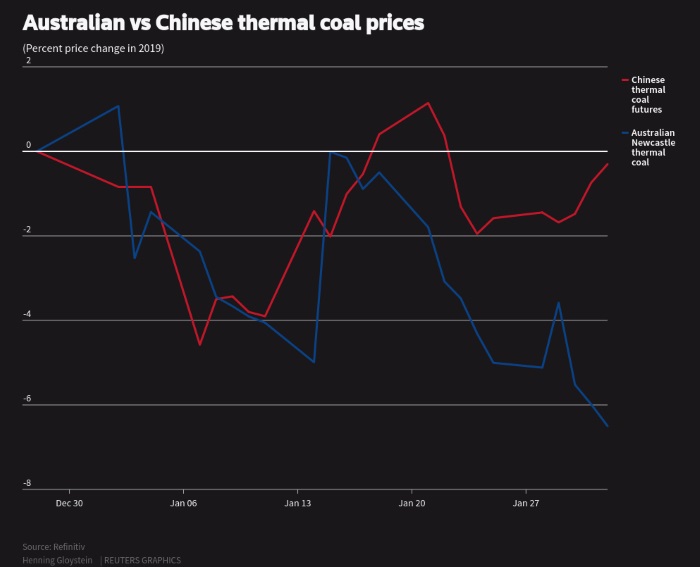 Meanwhile, the price of thermal coal cargoes for export from Australia’s Newcastle port, by contrast, have fallen by 5.1 percent from their highs on Jan. 15, to $96.15 per tonne, touching a 2019 low.

China cut coal imports last December following signals from Beijing that it would stop clearing shipments until 2019. Shipping data showed Australian coal supply to China fell to 5.9 million tonnes in December, down by half from monthly levels in mid-2018.

With the restrictions lifted at the end of 2018, Australian coal shipments to China soared back to almost 9 million tonnes in January, shipping data showed.
Source: Reuters (Reporting by Henning Gloystein in SINGAPORE and Muyu Xu in BEIJING; Additional reporting by Melanie Burton in MELBOURNE; Editing by Kenneth Maxwell)