Berbera Port’s new container terminal inaugurated, has capacity for 500,000 TEUs a year; Second phase expansion of terminal will increase capacity up to two million TEUs a year; Berbera Economic Zone under development aims to attract investment and new businesses, and to create jobs; Expanded port, economic zone and Berbera corridor will transform Berbera into an integrated maritime, industrial and logistics hub in the Horn of Africa.

DP World, a leading provider of integrated logistics solutions, and the Government of Somaliland, yesterday inaugurated the new container terminal at Berbera Port, following completion of the first phase of the port’s expansion as part of its development into a major regional trade hub to serve the Horn of Africa.

The new terminal was officially opened by His Excellency Muse Bihi Abdi, President of Somaliland, and Sultan Ahmed bin Sulayem, Group Chairman and CEO of DP World, at a special event attended by over 200 guests, including a Government delegation from Ethiopia, led by their Excellencies Ahmed Shide, Minister of Finance and Dagmawit Moges, Minister of Transport. The event also included a symbolic ground-breaking for the new Berbera Economic Zone, the first phase of which is under construction.

The new container terminal with a deep draft of 17m, a quay of 400m and three ship to shore (STS) gantry cranes, can handle the largest container vessels in operation today, and increases the port’s container capacity from current 150,000 Twenty Foot Equivalent Units (TEUs) to 500,000 TEUs annually. The terminal also includes a modern container yard with eight rubber tyred gantry cranes (RTGs). A new port One Stop Service Centre is also currently being built and will be ready in quarter three this year.

DP World has committed to investing up to US$442 million to develop and expand Berbera Port, and with the first phase now complete, Mr bin Sulayem also announced that work is already underway to further expand the port in a second phase. This includes extending the new quay from 400 to 1,000 metres, and installing a further seven STS gantry cranes, increasing the total from three to 10, enabling the port to handle up to two million TEUs a year, and multiple large container vessels at the same time. 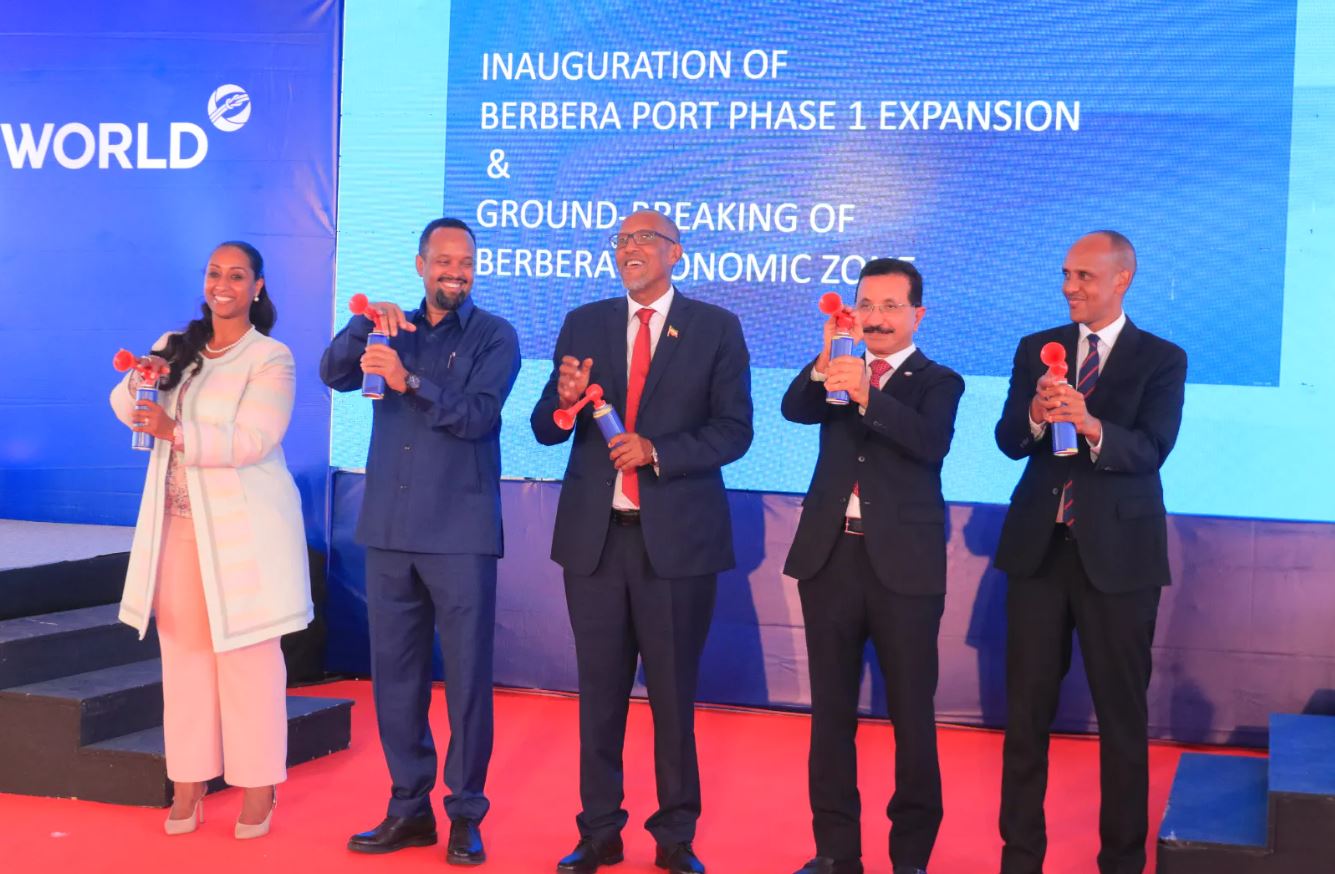 Part of the overall Berbera plan and modelled on DP World’s Jebel Ali Free Zone in Dubai, the economic zone is linked to the port and strategically located along the Berbera to Wajaale road (Berbera Corridor). The economic zone will serve as a centre of trade with the aim to attract investment and create jobs, and will target a range of industries, including warehousing, logistics, traders, manufacturers, and other related sectors. It will allow producers, suppliers, and customers to operate in a conducive and competitive environment for investment and trade.

The Berbera Corridor road upgrade project, funded by the Abu Dhabi Fund for Development (ADFD) and the UK’s Department for International Development (DFID), and the Hargeisa Bypass Road funded by UK Aid, is set for completion in quarter four, 2021 and quarter three 2022, respectively. The road will link to the existing modern highway on the Ethiopian side and position Berbera as a direct, fast, and efficient trade route for Ethiopian transit cargo.

His Excellency Muse Bihi Abdi, President of Somaliland, said: “This is a proud and historic moment for Somaliland and its people, as the completion of the first phase has made our vision of establishing Berbera with its strategic location into a major trade hub in the region a reality. With the new terminal, along with the second phase of expansion and economic zone along the Berbera corridor, we are now firmly positioned to further develop and grow our economy through increased trade, attracting foreign direct investment and creating jobs”.

Sultan Ahmed Bin Sulayem, DP World Group Chairman and CEO, said: “Our further expansion of the port in a second phase, and its integration with the special economic zone we are developing along the Berbera Corridor, reflects our confidence in Berbera and intent to develop it into a significant, world-class centre of trade. It will be a viable, efficient and competitive option for trade in the region, especially for Ethiopian transit cargo”.

DP World Berbera, which began operations at the port in March 2017, has since increased volumes by 35 percent and vessel productivity by 300 percent, and reduced container vessel waiting time from four to five days, to only a few hours.

DP World and the Ethiopian Ministry of Transport signed a Memorandum of Understanding (MoU) in May this year, with the aim of developing the Ethiopian side of the road linking Addis Ababa to Berbera, into one of the major trade and logistics corridors of the country’s international trade routes.
Source: DP World