Draghi Is Unshakable When It Comes to the Economic Outlook

In his assessment of the euro-area economy, Mario Draghi is having it both ways.

The European Central Bank president acknowledged that risks to the outlook have increased, flagged that weakness seen in the early part of the year could persist for longer than previously anticipated and announced a cut in the institution’s 2018 forecast. At the same time, he insisted the region’s ongoing upswing is still solid and broad-based.

His confidence in the economy helped support his view that inflation is finally on a sustained path toward the ECB’s goal, allowing for an end of asset purchases.

“We may well have this soft patch being somewhat longer than it is in the staff projections. In some countries, for example it is foreseen it may extend into the second quarter. But at the same time, this doesn’t tell that the underlying strength is unchanged, the underlying strength of the economy in the medium term is what we assess to be adequate.”

The new ECB staff projections see expansion of 2.1 percent this year, down from 2.4 percent in March. The revision only reflects the weaker first quarter — when growth slowed to 0.4 percent from 0.7 percent. Forecasts for the remaining quarters remained unchanged, suggesting they are at risk of another downgrade if that “soft patch” does indeed stick around. 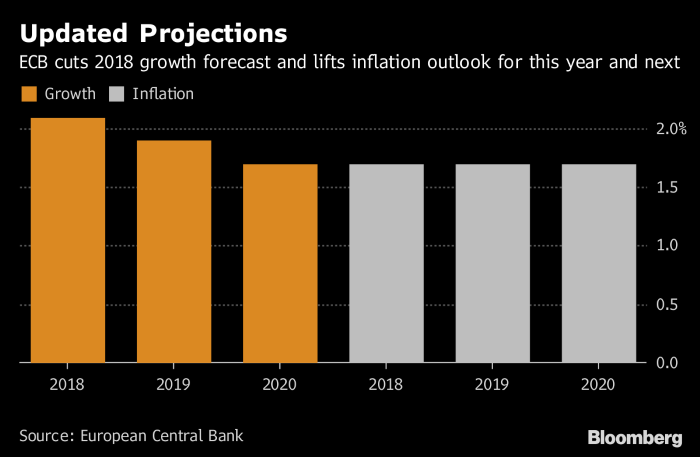 Draghi said the first-quarter moderation was partly a pullback from “very high levels of growth in 2017,” an “undeniable increase in uncertainty,” temporary supply-side constraints and a weaker impetus from trade.

2018-06-16
hellenicshippingnews..
Previous: Privatised Port of Newcastle restructures its workforce to grow and diversify
Next: Merkel floats tougher stance in trade row with U.S