Terms of Trade is a daily newsletter that untangles a world embroiled in trade wars. Sign up here.

European Central Bank President Mario Draghi will test the composure of global policy makers this week as he unleashes a barrage of stimulus to shore up economic growth.

The monetary easing will probably feature the centerpiece of an interest-rate cut that widens the difference between borrowing costs in the euro area and elsewhere. That will potentially affect foreign exchange markets — and risk the ire of critics such as Donald Trump.

While Draghi has a mantra ready that his institution strives for price stability and doesn’t target the euro, that won’t stop the U.S. president or others from accusing the ECB of fighting a “currency war,” a term coined by former Brazilian finance minister Guido Mantega. Trump has a history of citing the weakness of the euro when piling pressure on the U.S. Federal Reserve to cut its own rates.

The timing of Draghi’s action won’t help blunt such calls either, coming a week before the Fed determines its own response to a slowing economy impaired by global trade tensions. Meetings of the Bank of Japan and Swiss National Bank are also due then. 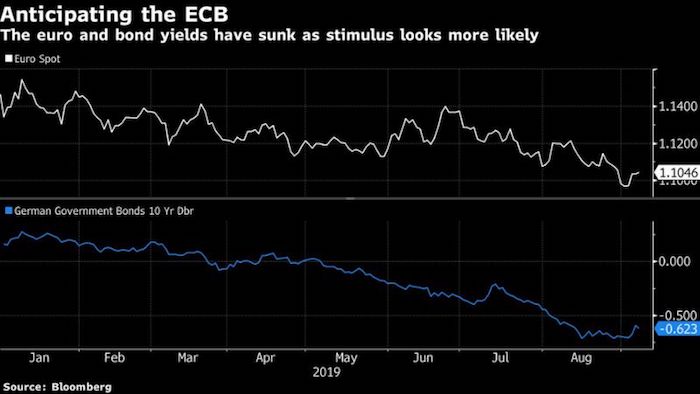 “Draghi is pressing for something significant,” said Kit Juckes, chief global FX strategist at Societe Generale SA, who expects at least a rate cut. “I don’t know that it’ll trigger a big FX response, but the more it does, the more likely it is to elicit a response from the president.”

The ECB chief put investors on watch for stimulus in July, when he said policy makers had instructed staff to prepare options. Economists surveyed by Bloomberg all predict a rate cut of at least 10 basis points to minus 0.5%, and probably further deepening later in the year, and investors are pricing 15 basis points. While some governors oppose an immediate reactivation of bond purchases, the survey suggests that’s also likely to happen.

“The hawks on the European Central Bank’s Governing Council have been vocal recently about their opposition to relaunching quantitative easing. They will face an uphill battle in bringing the majority around to their side.”

The anticipation of action helped push the euro below $1.10 to a two-year low last week, and on Monday it traded at $1.1031 as of 9:51 a.m. in London. Against that backdrop, Swiss central bank data suggests its officials stepped up interventions in August to keep a lid on the franc.

A weak currency can boost an economy by making its exports more competitive. For Trump, with his focus on trade protectionism, that means Draghi’s impending easing has been a bugbear ever since the idea was first aired by the ECB chief in June. The U.S. president tweeted about it then, and has since cited the euro as he presses for Fed easing, most recently on Aug. 30.

The euro has fallen against both the Japanese yen and the Swiss Franc, dropping to the lowest level since 2017 against both, as investors seek safety from the U.S.-China trade war and slowing growth in the euro area. The common currency is nearly 18% undervalued, according to the Big Mac index, a measure of purchasing power across countries.

The Fed will take its own decision on Sept. 18, and may deliver a quarter-point rate cut as a festering trade standoff between the U.S. and China weakens global growth.

The next day, the Bank of Japan, which like the ECB also has a negative rate, may consider reducing its own benchmark deeper below zero. The SNB, also meeting on Sept. 19, already has the world’s lowest rate at minus 0.75% and probably has limited space to act. Credit Suisse Group AG reckons it may stick with currency market interventions for now.

Other central banks are also taking a measured approach. Sweden’s Riksbank stuck last week with its plan to withdraw stimulus, the Bank of Canada declined to ramp up its own aid to the economy, and Australia’s central bank kept its key rate unchanged.

“I’d not call this a currency war,” said Ricardo Garcia, head of European Macroeconomics at UBS Switzerland AG. “We’re not at a point where it’s escalating between central banks.”

The ECB will be glad if that analysis can hold. With a deposit rate at minus 0.4%, its space to ease further is finite. Significantly expanding bond purchases remains contentious among policy makers because it might require self-imposed limits on quantitative easing — aimed at staying the right side of the line between monetary and fiscal policy — to be scrapped.

The danger that European stimulus could provoke a counterattack is surely a concern for policy makers, in particular if Trump changes tactics, according to Ned Rumpeltin, European head of foreign-exchange strategy at Toronto Dominion Bank.

“The issue now, in particular, is whether that decision could draw retaliation from the U.S. in the form of tariffs on autos or other measures,” he said. “If he simply uses whatever package the ECB presents as a stick to beat the Fed, then the market is probably prepared for that. If, however, he turns more aggressive toward the euro zone itself, then we think we could be entering a new phase of the conflict.”
Source: Bloomberg