Recent interviews conducted by Drewry of global shippers and leading carriers within its global customer base expose concern and real commercial harm to most shippers and identifies practical but limited measures within the control of ocean carriers and shippers to mitigate and manage market disruptions.

For some months Drewry has been aware of a growing disconnect between industry stakeholders and a need to help reconcile the clear and present concerns of shippers with carriers’ mid and longer terms plans to help alleviate the ongoing container system crisis which began back in mid-2020.

Leveraging its independent position in the industry, Drewry opened conversations with members of its shipper Benchmarking Club (a group of 110+ multinationals) and, providing the service provider viewpoint, with 5 of the top 12 carriers (representing 44% of the global container shipping capacity). Senior decision-makers from both groups provided their unattributed and candid perspectives on the increasingly tense shipper-carrier divide.

More than 80% of shippers reported “serious issues” with lack of shipping capacity, poor schedule reliability and high freight rates. Furthermore, 40% of shippers said that they are considering sourcing or exporting from a more local/regional location – a policy decision with the potential to substantially impact carriers’ future deep-sea network and TEU-mile demand. 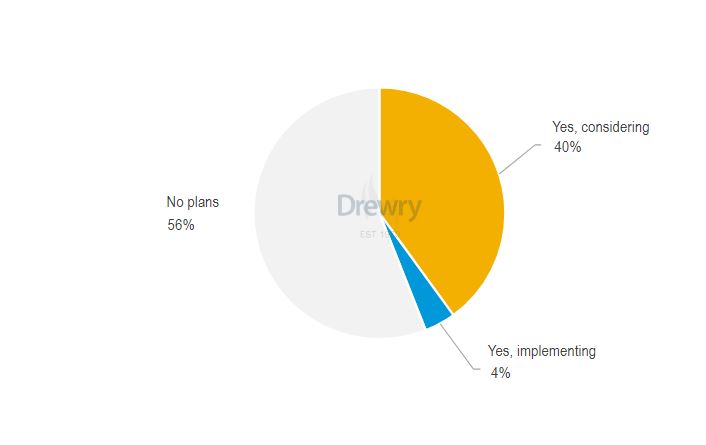 The survey also flagged and quantified that some shippers have lost some export markets because of the dramatic changes and unreliability of the container transport system. Some Drewry benchmarking customers also expressed the view that ocean carriers were not sufficiently aware of the magnitude of the harm made to their businesses and that shippers were waiting to hear how carrier would address these issues.

Drewry then committed to communicate the shipper survey results to ocean carriers and to seek their replies. The main findings of the anonymised survey of top carriers are 3-fold:

• Interviews with ocean carriers confirm that there are a number of measures which shippers, ocean carriers and ports can take – and will need to take – to mitigate current container shipping issues. No single contingent group, or actor in the market, can solve the entire situation. (Drewry Supply Chain Advisors is advising shippers on such measures.)
• The current medium-term plans of ocean carriers appear to focus on assets – ordering new ship and new boxes – with a lag time between order and delivery to the market.
• Ocean carriers do not appear to have short-term, contingency plans that can resolve the current market imbalances, other than attempts to stabilise schedules.
Source: Drewry