It goes without saying that the past year has been unprecedented for not just the offshore rig market, but the oil and gas industry as a whole. The Covid-19 pandemic has interrupted rig contracting and drilling operations in every region and while activity in some geographies has shown signs of recovery, a new “normal” has been put in place for crew movements and other logistical protocols. In addition, a number of major rig owners have gone through or are currently in the midst of Chapter 11 bankruptcy proceedings, and consolidation rumors are once again running rampant further fueling uncertainty over the near-term future of the global fleet. The number of annual drillship retirements since 2016 has ranged from 5-7 units, and there is no reason to expect anything less in 2021.

According to RigLogix data, marketed (excluding cold stacked units) committed* drillship utilization in February and March was just under 82%, higher than any month since February 2020. As seen in the graph below, utilization in 2020 fell to just below 70% in July and despite some ups and downs, has sharply increased since December of last year. The recent upward swing was brought about by a combination of a three-rig supply decline, coupled with a near five-rig increase in demand. For the entire period, a supply decline has been responsible for utilization not falling off the deep end, falling from 94 in June 2019 to 74 by March 2021. At the same time, drillship demand has also come down – from a high of 73 contracted/committed rigs in May 2019 – to 60 in March 2021.

*The figure below displays our 2021 projected supply, demand, and utilization. We have included our historical committed utilization (from above), but since those rigs can only be incorporated into the forecasted numbers as their contracts begin, there will be a slight initial utilization decline when comparing between March/April. 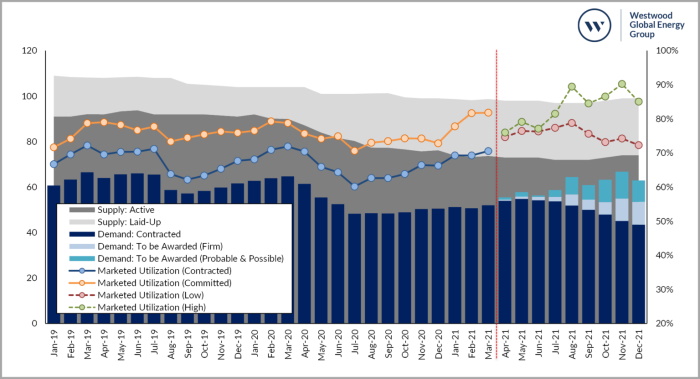 Despite the recent utilization uptick, day rates have generally not followed suit but there have been a few isolated instances of noticeable increases such as Maersk’s just over $210,000 fixture for Korea National Oil Company (KNOC) for an upcoming well off South Korea, or Transocean’s recent $215,000 fixture for BHP in the US Gulf of Mexico. However, when looking at overall “clean” fixtures during the past year (that is the base rate sans integrated services, mobilization costs, and other add-ons) the average new rate fixture since February 2020 is just over $187,000, contrasted against the 2019 average of just over $182,000. The general rule of thumb is that utilization must hit 85% for substantial rate improvement to occur (this number used to be 90%), and at just a notch below 82%, we are closing in on that mark. With the Brent crude price settling above $60 for much of the first quarter of this year, there is cautious optimism (boy if I had a nickel for every time I have heard that phrase!) amongst rig owners for the remainder of this year and into 2022, which has been somewhat substantiated with reports of some operators accelerating drilling programs in order to take advantage of low rig rates while they can.

Early contract terminations and suspensions have also been prominent in the rig market during the past year, although they have slowed down considerably in recent months. Fortunately for drillship owners, this segment has emerged less scathed compared to semisubmersibles (semis) and jackups. Only eight contracts have been early terminated since March 1, 2020 and none since mid-December of last year. Nevertheless, rig owners lost over $350 million of revenue from seven of the eight terminations (no day rate was known for the other fixture). One of the eight terminations, which accounted for $150 million of the total, was due to an operational incident and not the oil price decline or Covid-19 pandemic, as per the other cancellations.

Drilling contractor Chapter 11 bankruptcy filings have garnered much of the market’s attention so far this year. Noble Drilling, Valaris, Diamond Offshore and Pacific Drilling, which together own nearly 30% of the existing drillship fleet (29 of 99), have gone through or are going through the process, as is Seadrill Ltd subsidiaries Seadrill Partners and AOD Drilling. In the case of Seadrill Partners, a recent agreement will end up in an arrangement seldom seen in the rig market, that is a rival rig owner taking over management services. The court recently approved Vantage Drilling to manage four of the eight units, while it is believed that agreements for the remaining four units will be in place in May. Rumors are that Diamond Offshore and Odfjell could be involved in that deal.

With the bankruptcy filings, the inevitable rumors of consolidation; particularly regarding Noble Drilling, Valaris, Diamond Offshore and Pacific Drilling have been swirling since at least three of the companies are said to have some common debt holders. During the writing of this article, the news broke that Noble Drilling will acquire Pacific Drilling in an all stock deal that will close in April. The combination will result in two Pacific drillships being retired “expeditiously”. Whether any other deals take place remains to be seen, but it is possible that the changing landscape could mark the end of some of the biggest names in the history of the offshore rig market, joining the likes of Rowan, ENSCO, and GlobalSantaFe.

On the more positive side, the aforementioned recovery in oil prices so far this year is already having a positive impact on the drillship segment. In looking at outstanding requirements where a drillship is believed to be the preferred rig type, there are 55 drilling programs that have a 2021 start date and 152 in total. As of the time of writing, 21 of the 55 are currently in the pre-tender or active tender stage so there is no shortage of upcoming new work. Overall, 38 of the 152 total drillship requirements are in some form of tendering. The table below details these requirements by region. 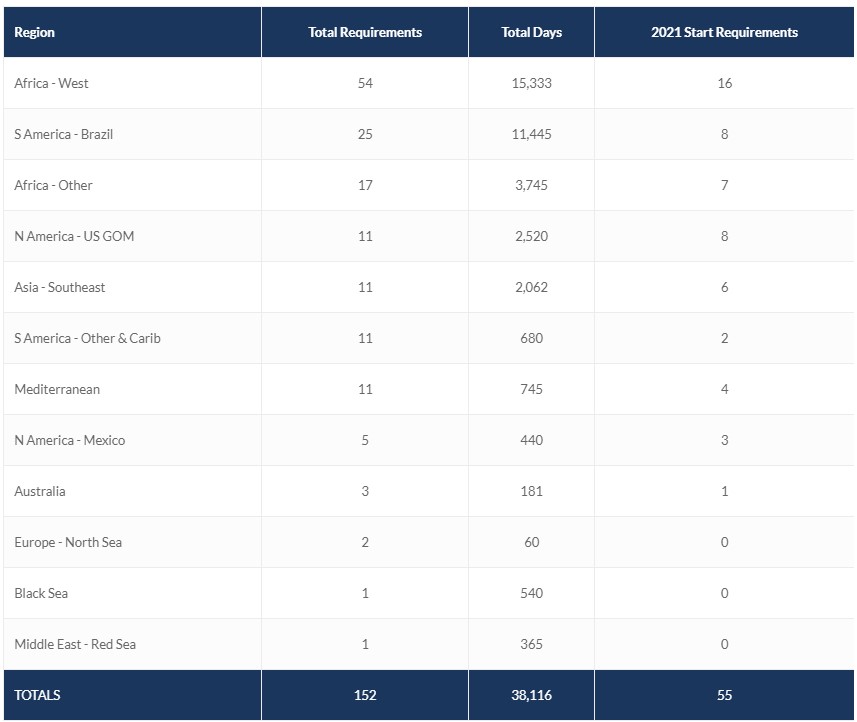 As seen in the data, the bulk of current drillship demand is in the so-called golden triangle area (highlighted in red), which comprises the Gulf of Mexico (US and Mexico), South America (not just Brazil anymore), and Africa (west, south, and east coasts). These regions account for 44 of the 55 requirements scheduled to begin this year and 118 of the 152 total. Between Africa and Brazil specifically, there is 83.6 rig years, spanning some 30,523 days of work potentially up for grabs. Inevitably, some 2021 start dates will be pushed into 2022 or even 2023, the Gulf of Guinea in particular, is expected to continue to struggle with covid-related logistical challenges.

Over 2021, we expect drillship supply to fall by around eight units from the 2020 average fleet size of 83.5. Since January 2020, six drillships have been removed from the fleet (five in 2020 and one so far this year), but according to RigOutlook data, there are nearly 30 drillships listed as potential retirement candidates. Over 50% of those have been stacked for two years or longer and most have expired special periodic survey (SPS) dates. Given the prohibitive cost of reactivation, estimated to be anywhere from $50 million to as much as $100 million, it should be assumed that only a handful (at most) of these units will ever work again. Newbuild rigs eventually will have a greater impact on supply, but not by a lot this year. At present only four of the 17 units under construction have a 2021 delivery date and we expect likely deliveries this year to include Transocean’s Deepwater Atlas and Deepwater Titan, both of which have contracts in the US Gulf of Mexico. All things considered, we believe it is reasonable to expect our net attrition projection of eight units will be realized this year.

All in all, we expect drillship demand in 2021 to increase on average by as many as 10 units to around 65, based on open requirements. This projection is supported by both Westwood Global Energy’s Wildcat database which shows that the number of high impact exploration and appraisal (E&A) wells drilled offshore could be 17-22% higher than the 2020 total and our SubseaLogix database which expects 250 subsea tree installations in 2021 – a 19% increase year-on-year.

As utilization improves, the balance of buying power will inevitably start to shift, and while anecdotal evidence of current bidding levels indicate that rig owners believe now is the time to push pricing, those efforts to date have only been moderately successful, constrained by some managers continuing to contract rigs at breakeven levels (or even below). Nevertheless, we expect several upcoming fixtures to eclipse the previously noted $187,000 “clean” rate average, with the psychological ceiling of $200,000 to be more routinely broken shortly thereafter. We also expect that some fixtures for work starting late this year or in 2022 to be well above that mark and a beacon of better times to come for the battered and beleaguered deepwater drilling market.
Source: Westwood Energy

2021-03-31
hellenicshippingnews...
Previous: Global shares struggle as U.S. bond yields march higher
Next: Robots could replace hundreds of thousands of oil and gas jobs, save billions in drilling costs by 2030