Dry Bulk: A Shift in Ton-Mile Demand Supported Rates in 2021

China’s tensions with Australia led to a significant increase in iron ore imports from Brazil, which now accounts for 22.5% of global iron ore shipments. In a recent report, shipbroker Banchero Costa said that “2021 has proved fairly robust, but far from remarkable, in terms of global seaborne iron ore trade. Total global loadings in the first 11 months of 2021 were up +0.7% year-on-year to 1,418.3 million tonnes, according to vessels tracking data from Refinitiv. This was higher than the 1,384.6 mln tonnes in the first 11 months of 2019, a year which was affected by the Brumadinho dam disaster. It was also, by just a tiny bit, more than the previous all time record 1,416.6 mln tonnes in the first 11 months of 2018. In terms of tonne-miles, things are even more positive, as trade shifted in favour of long haul shipments from Brazil to Asia”.

According to Banchero Costa, “total iron ore shipments from Australia actually declined by -0.2% y-o-y in the first 11 months of 2021, to 805.3 mln tonnes. On the other hand, total shipments from Brazil surged by +5.6% y-o-y in the same period to 319.0 mln t. Do note however that this is still below the pre- Brumadinho level of 351.0 mln tonnes in Jan-Nov 2018. Brazil now accounts for 22.5% of global iron ore shipments, after Australia’s 56.8%. Mainland China is by far the largest importer of iron ore in the world. In Jan-Nov 2021, China accounted for 69.3% of iron ore shipments. However, iron ore imports to China corrected somewhat in 2021 from the record high levels seen last year”. 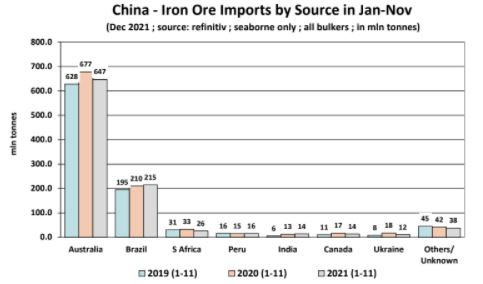 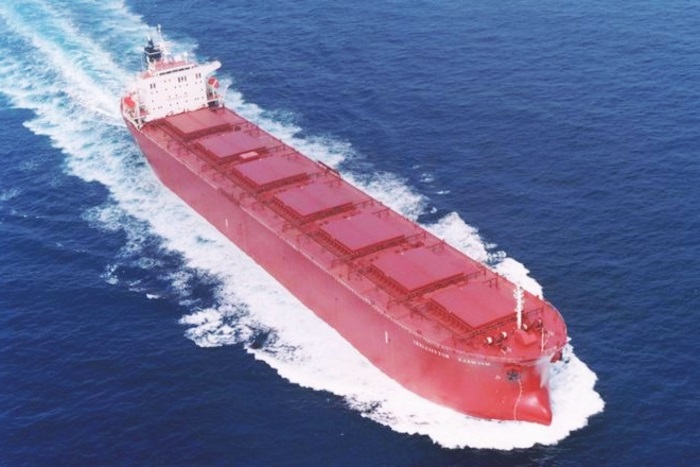 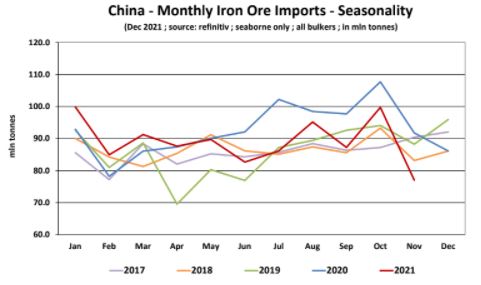