Dry Bulk: A Struggling Market Gets All Hyped Up By Capesize Volatility

Fleet growth expected to outstrip demand growth in 2019 and 2020, making the near future look unappealing.

It’s been a rollercoaster ride for the dry bulk market in 2019. The market fell from slightly profitable levels in the first week of January, to hit loss-making lows during February, March and April that almost touched the all-time lows seen in early 2016. The Handysize, Supramax and Panamax segments all started to climb again after Chinese New Year in mid-February, but the Capesize sector lost all buoyancy. The combination of low Chinese iron ore demand and iron ore supply chain disruptions in both Brazil and Australia meant that freight rates hit USD 3,460 per day on 2 April. Since then, the Capesize market has climbed, touching USD 12,583 per day on 28 May.

During April, it was evident that the Baltic Dry Index (BDI) is dominated by Capesize shipping. The index rose 50% on the back of a 239% increase in rates for Capesize ships – from a very low level – whereas the three other segments only rose slightly or decreased. 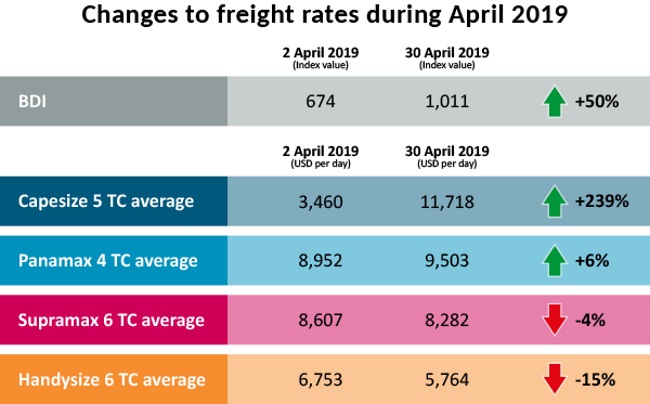 BIMCO now believes that the BDI cannot be used as a proxy for the dry bulk market as a whole, because of the weighting of the different ship types in the index.

This dates back to 1 March 2018, where the BDI was changed from an equal-weight index for Capesize, Panamax, Supramax and Handysize to a weighting of 40% on Capesize and 30% on each of the Panamax and Supramax time charter (TC) averages, and no longer including the Handysize TC average.

Knowing profits from losses requires insight into real USD per day earnings, which no index values can provide. 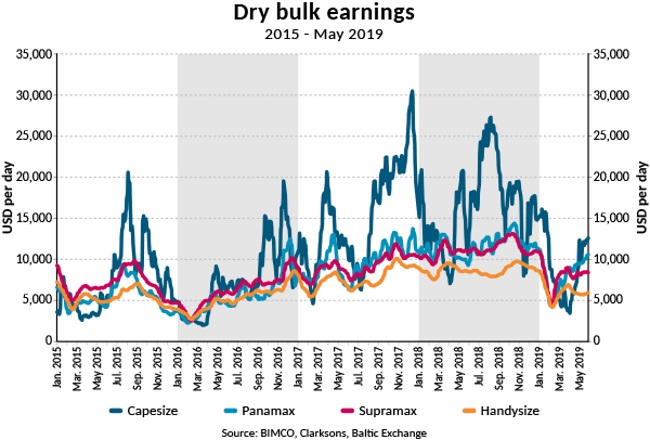 The negative impact on the dry bulk market from the ongoing outbreak of African swine fever in China is becoming clearer from the import data. The disease broke out on 3 August last year, and official reports about the extent of the problems are still muted – but Chinese imports of soya beans have dropped by 14.4% (-2.8m tonne) in Q1-2019 when compared with Q1-2018. This extends the decline, as Chinese imports dropped by 7.1m tonnes in Nov-Dec 2018 from the previous year. Ultimately, the combined development of the escalating trade war and African swine fever means that American exports of soya beans are unlikely to return to previous highs.

In total, China has 56% of the world’s pigs, according to Statista. As much as a third (130 million) of all Chinese pigs may be culled because of African swine fever, according to estimates by industry sources. From a dry bulk shipping perspective, this is a significant amount of lost soya bean tonne-miles, mainly from Brazil and the US. On the other hand, reefer containers may benefit from increased imports of pork to make up for the lost domestic production at an unchanged level of consumption.

The driving factor in this fall in Chinese iron ore imports is the move to use more scrap steel. Reports of declining iron ore stocks at Chinese ports appears to have spurred hopes for an increase in iron ore imports; however, we see those iron ore stock levels being an unimportant factor – not a bullish sign. If anything, lower stocks is merely a sign of stocks matching lower import levels.

In the first four months of 2019, yards delivered 10m DWT of newbuilt dry bulk shipping capacity. The demolition of 3.9m DWT limited the immediate negative impact, but even a fleet growth of 0.7% harms the market, as cargo demand is seasonally low. Capesize accounted for 87% of the demolished capacity pushed out of the market, as freight rates fell and the outlook turned bleaker.

Because of this unexpectedly dramatic start to the year, BIMCO revised its demolition forecast for 2019 up to 8m DWT from 4m DWT. It’s worth noting that Panamax, Supramax and Handysize ships also operated at lossmaking freight rates levels for the first four months of 2019 without causing a rush to demolish. Therefore, the forecast is kept at 8m DWT.

BIMCO’s estimated fleet growth remains around 3% for 2019 and 2020, under the given assumptions.

On 1 May, the orderbook stands at 96m DWT [source: Clarksons]. It’s been unchanged at that level since February 2018, with around 100m DWT scheduled for future delivery. This is bad news. 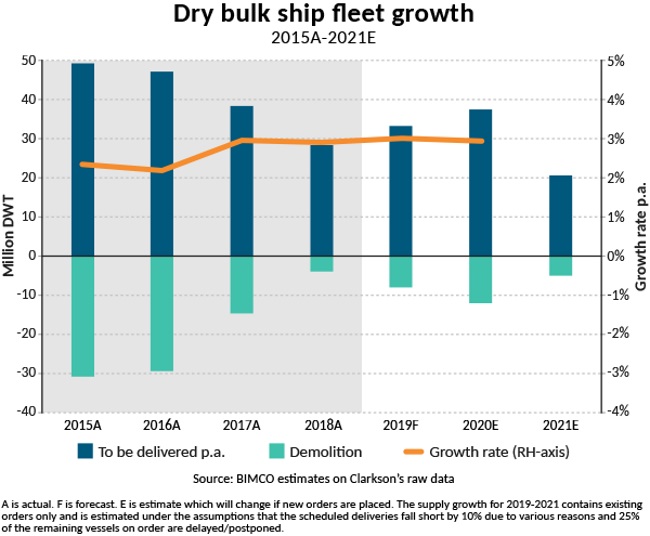 To accommodate this fleet growth and retain a balanced market, the demand growth would need to reach 5% per year. We did have that level of demand growth in 2003-2007 and 2010-2014, but given the current developments in China, it is very unlikely to return anytime soon.

Chinese steel demand is following a downwards-pointing trajectory, according to the World Steel Association (worldsteel). The reason is the combined effect of overall slowdown in China’s economic activity growth, and trade tensions with key trading partners. Worldsteel expects government stimulus in 2019 will give a boost to steel demand, before another slowdown in 2020. The knock-on effect of that stimulus is already being seen, with Chinese steel production growing by 9.9% in Q1-2019 compared with the same period in 2018.

Chinese steel production is growing while iron ore imports decline at the same time because of greater reliance on scrap metal for steel production. BIMCO expects Chinese imports of iron ore to fall in 2019, which will be the second year of declining iron ore import demand. For 2019, the US Energy Information Administration (EIA) forecasts coking coal exports to decline by 9m tonnes (16%) and thermal coal exports to decline by 5m tonnes (10%). EIA bases its projections on two factors: slower global economic growth, which will decrease the demand for steel; and European countries’ move away from coal-fired power plants. Because of the long sailing distance involved when coal is exported to Asia, it’s relevant to watch out for this swing factor in the market. 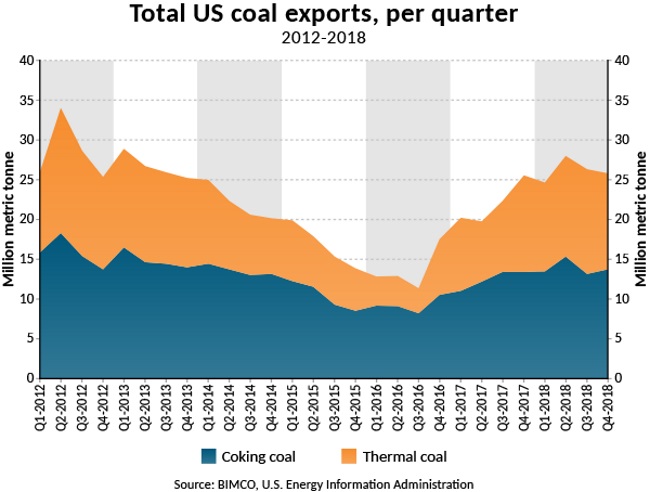 Of this, 53% was coking coal for use in the steel production industry and 47% was thermal coal, used for generating electricity.

Thermal coal exports in 2018 were up to all regions, including Europe. The largest gains were seen in Asia, which benefitted the dry bulk industry the most because of the long sailing distance. India remained the No 1 importer. The country grew its imports by 53% to reach 10.5m tonnes in 2018. No 2 destination was the European gateway, the Netherlands, which grew by just 3.2% to reach 5.6m tonnes.

Although Chinese imports only account for 0.7% of total thermal coal exports from the US, the 99.4% decline in Q4-2018 year-on-year was a clear sign of the ongoing trade war.

Europe takes the lion share of US coking coal exports, at 44%. Europe was also the region growing the most in volume terms, and is up by 10.9%.

What could stop the EIA’s expected decline in US coal exports? Continued high world market prices.

US coal exports are mostly affected by international coal prices. When exporters are stretched and prices go up, the US is the go-to country for global importers.

Previous: IMO 2020 – Countdown to 1 January 2020 -How will the changes affect refining and shipping?
Next: Tankers: Ships’ Values Expected to Trend Higher