Ship owners are ramping up their acquisitions of dry bulk carriers, on the expectation that the recent slump in the freight rate market could soon be over. In its latest weekly report, shipbroker Banchero Costa said that “Scorpio Bulkers was very active last week with the one sale and leaseback deal and one strait sale deal. The first deal is for 3 x Ultramax and 4 x Kamsarmax to CMB Financial Leasing: the vessels are sold and chartered back to Scorpio for 7 years with purchase options from the third year and purchase obligation at the end of the period. The second deal involves 2 x Kamsarmax 2015 built at Jiangsu Shipbuilding, “SBI Electra” and “SBI Flamenco”, which are reported to Clients of CSL for $48 mln en bloc”. 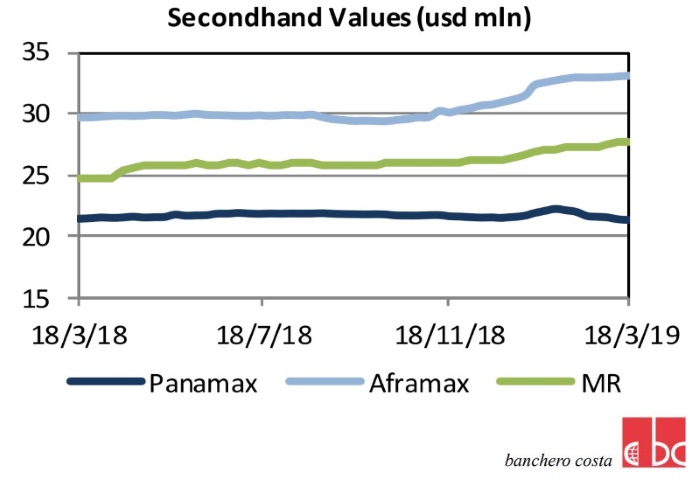 The shipbroker added that “Transocean Maritime sold its 11 years old “Atlas B”, 76,000 dwt built Imabari to Greek interests for $12 mln, the vessel was bought by Transocean in 2016 for less than $10 mln. During the week 2 x Tess58 were reported sold. The “Ghent”, 2011 built by Tsuneishi Zhoushan, grab fitted, went to Pacific Basin for around $15 mln, whilst “Nord Express”, 2007 built by Tsuneishi Cebu was sold for $11.7 mln to undisclosed buyers. On tankers, two VLCC were reported sold; the “Sea Lynx”, 2004 built by Hyundai Samho went to Clients of Nathalin for $31.5 mln and the “Olympic Legacy”, 1996 built Sumitomo was reported at $20 mln to Nigerian interests”, Banchero Costa noted. 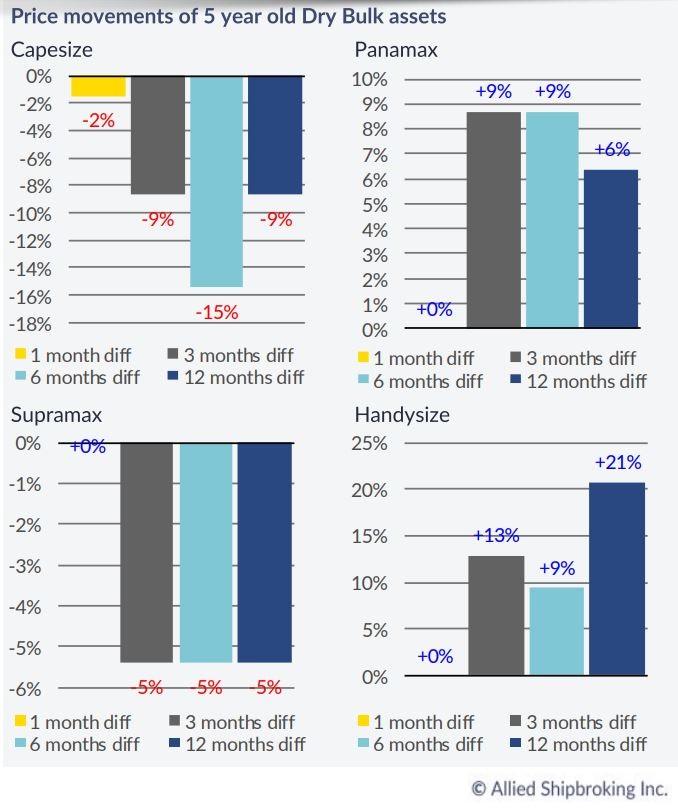 In a separate note, Allied added that “a significant rise was noted in the dry bulk S&P activity this past week, as several new deals came to light. Buying interest continues to focus on the Kamsarmax and Panamax segments, with owners possibly anticipating that the earnings for these types of vessels will rebound soon, while quoted secondhand prices seem to be competitive right now. Activity was not limited to these sizes however, with a fair amount of tonnage changing hands in the smaller Supramax and Handysize segments as well. Activity ramped up in the tankers segment as well last week, with the focus being equally shared between both crude and product tankers right now. The overall positive market outlook has already boosted buying appetite, with expectations being that increased activity will continue to follow in the coming weeks. Current discounts on second-hand vessels compared to newbuildings has also facilitated in further feeding this trend”, the shipbroker concluded. 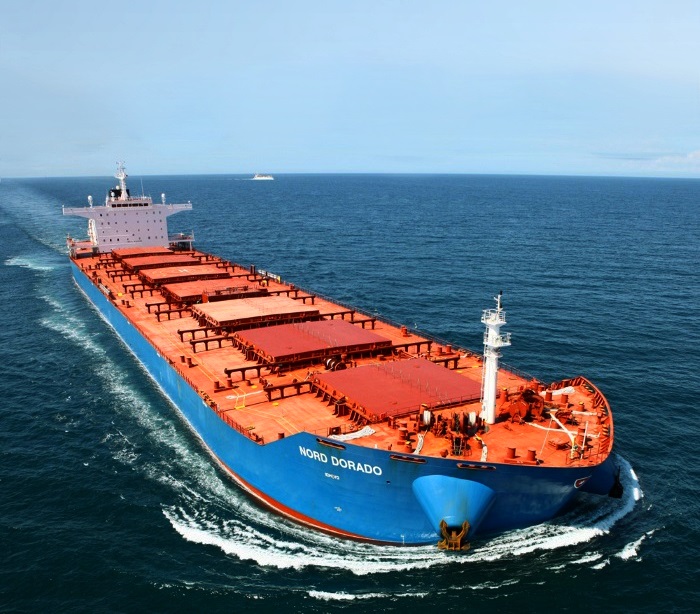 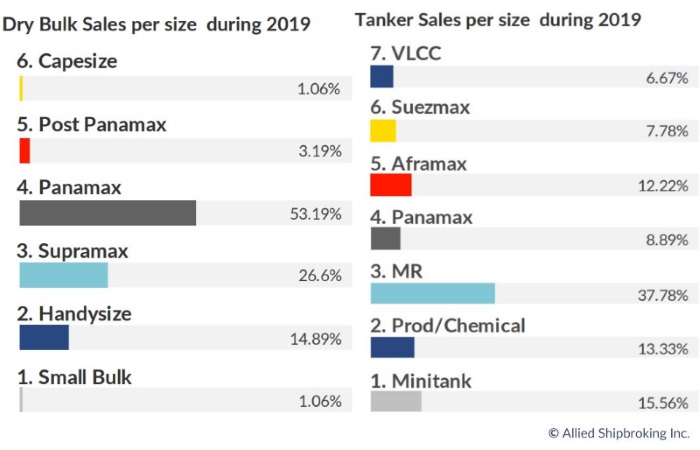 Meanwhile, in the newbuilding market, Banchero Costa said that “in the Dry Bulk sector, Taiwan Navigation ordered two 80,000 dwt Kamsarmax at Namura Shipbuilding, for delivery during 1st half 2021 at $ 33.9 mln, price would include tier III M/E and scrubber.
There was lack of tanker orders last week, apart from the smaller chemical tankers fully st/st of 4,500 dwt. Italian owner Amoretti Armatori Group placed order for two units at Ningbo Xinle Shipyard, China for delivery second half 2020 at an undisclosed price which we may assume ranging between $16 to 17 mln according to market trend. Vessels will be then chartered out to ExxonMobil. In the VLPG segment, Kumiai Navigation booked another 82,200 cbm, at Kawasaki Shipyard. Finally, United European Car Carriers (UECC), jointly owned by NYK and Wallenius, has ordered two of next generation PCTC (of 3,600 standard car units) at Jiangnan Shipyard in China. Vessels to be equipped with LNG duel fuel system as well as battery package, to comply with the regulations with NOx Tier III. Price were unknown, delivery scheduled in 2021”, Banchero Costa concluded. 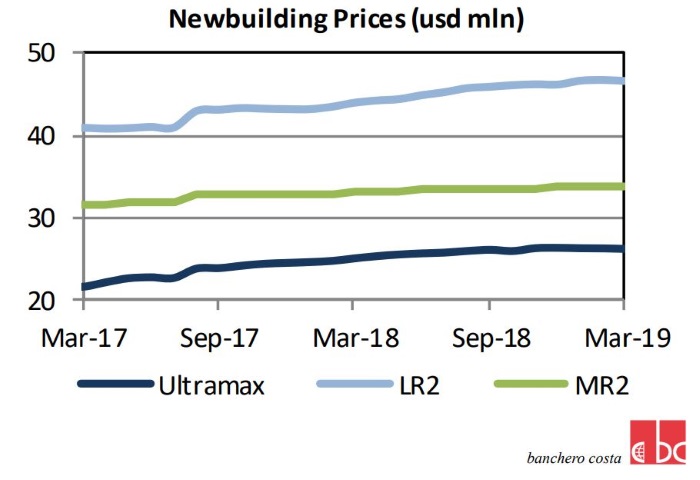 In a separate newbuilding report, Clarkson Platou Hellas added that “in tankers, Clients of Maran Tankers have ordered one further Suezmax tanker at Deahan Shipyard, to bring their series there to four ships. This ship will deliver in November 2020. In the Chemical sector Marittima Emiliana of Italy have placed their first order since 2003 by ordering a pair of 4,500 dwt stainless steel chemical tankers for delivery at the end of 2020, from Ningbo Xinle Shipbuilding in China. One order to report in dry this week, although likely to have been concluded some time ago, Taiwan Navigation have returned to Namura in Japan for a pair of 84,000 dwt, wide beamed, Kamsarmax Bulkers for delivery in the first half of 2021. United European Car Carriers (UECC) have this week announced the signing of two plus two 3,600 CEU pure car and truck carriers, which will be LNG dual fueled as well as benefit from hybrid energy solutions. These Vessels will deliver from the first half of 2021 and are the first orders in this sector for CSSC’s Jiangnan Shipyard. Finally, in the LPG market, Kumiai Navigation have ordered at their compatriot Yard, Kawasaki Heavy Industries in Japan for a singular LPG dual fueled 84,000cbm VLGC. This Vessel will deliver in the second half of 2021”, the shipbroker concluded.
Nikos Roussanoglou, Hellenic Shipping News Worldwide

Previous: Putting yourself ahead of the pack with the carbon-robust ship
Next: Tanker Market Rates 21/03/2019