Despite the latest surge in the dry bulk market, ship owners seem to prefer the short-term gains, opting for second hand tonnage, rather than investing in more newbuildings. In its latest weekly report, shipbroker Allied Shipbroking said that “new ordering activity seems to have slowed for dry bulkers for now, with a mere 3 units being added to the global orderbook this past week. Interestingly enough, all 3 vessels were Capesizes, reflecting the revived appetite for this specific segment, in line somehow with the improved earnings being noted of late. With the current bullish trend being seen in the freight market, owners are likely to continue to be ever more attracted to the new ordering route. However, it will be of little surprise if we see this interest spill over to the smaller segments as well. In terms of the tanker segment, the newbuilding activity gear up seen this past week past week seems to have been overdue. The positive outlook for the tanker market as a whole has pushed buyers to act in both the crude oil and oil products segments. Last week, focus was given to Suezmaxes and Aframaxes, but with some slight activity being seen in the MR space as well”, Allied said. 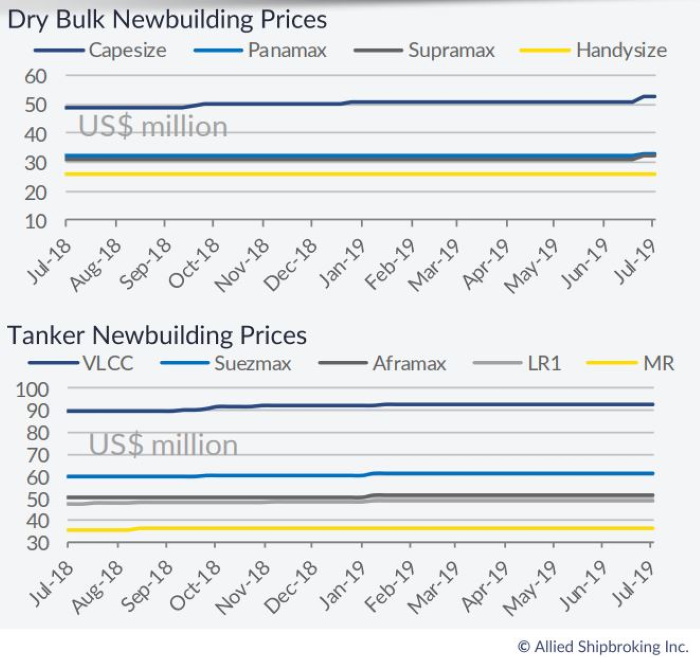 According to Banchero Costa’s latest weekly report, in the newbuilding market, “JMU of Japan received an order for a single bulk carrier of 211,000 dwt from NYK against 15 years TC to JFE Steel Corporation. Another single order, this time for Kamsarmax bulker of 81,600 dwt, was placed at Tsuneishi Cebu, Philippines dely mid-2021 at undisclosed price by Helikon of Greece. It was a rich week for tankers orders in general. JMU of Japan took orders also for tankers with 2 VLCC of 300,000 dwt each with undisclosed price, buyers are also unknown but apparently the order is handled locally in Japan. Enesel of Greece (N.S. Lemos) has agreed for 2×157,000 dwt Suezmax with Samsung HI, dely set for early 2021 at a price of $62.2 mln each. The order brings the total of 6 Suezmax ordered by the Owners this year in S.Korea (4 are in place with Daehan). In the LR2 sector, Union Maritime of UK went to Cosco Shipping Heavy Industries for 2+2 115,000 dwt coated tankers for dely second half 2021. Yasa Shipping of Turkey has ordered 2×50,000 dwt product carriers +2 options at Hyundai Mipo, S. Korea for dely early 2021. Prices are going higher and this time it was agreed $38 mln apiece. In addition, Bihar International (Bakri Group) has possibly agreed for a multiple order for MR2 and Aframax tankers with New Times Shipyard, China. Parties were in talks 3 years ago and now contracts seem to be finalized. High specification ships would be costing $37 mln the MR2 and some $47.5 mln the Aframax”, the shipbroker said. 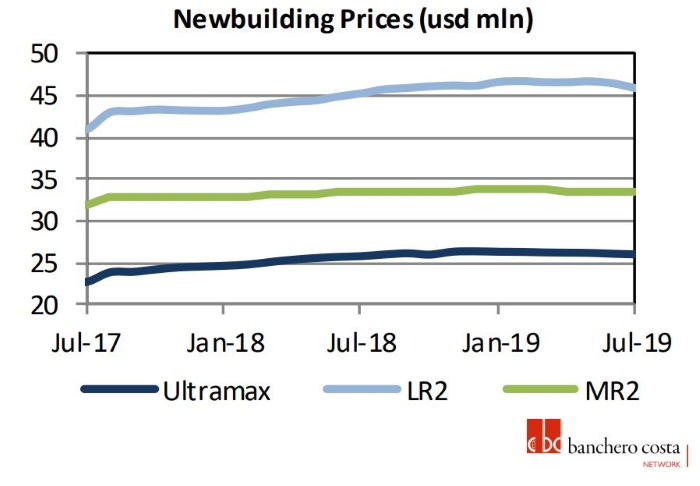 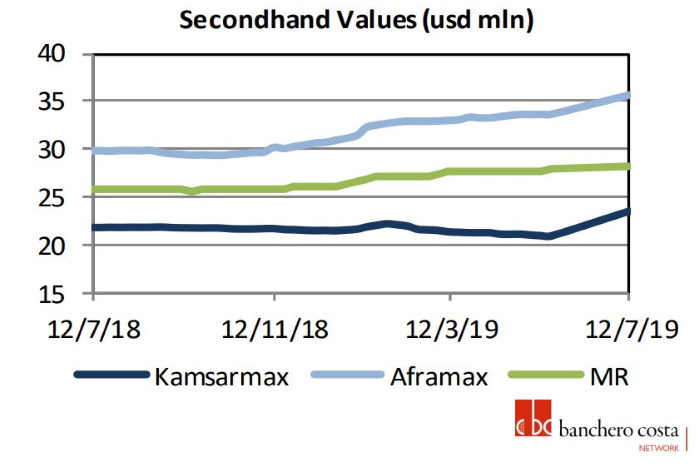 In a separate note, Allied Shipbroking added that “on the dry bulk side, a very firm week in terms of volume was due, with the bullish sentiment still holding for the time being. Moreover, it came hardly as a surprise that we witnessed the Capesize market coming into action this week, while along with the Panamaxes, dominated the overall SnP market these past few days. All-in-all, given the strong signs of recovery from the side earnings, we can expect a very vivid SnP market to hold for the time being. On the tanker side, we also witnessed a gear up in activity, with plenty of units changing hands the last couple of days. In this sector too, we see the bigger size segments (and mostly vintage assets) move things further at his point. Moreover, given the recent trends of the freight market, it is rather difficult to point if this is due to a the current earnings being seen, or rather an opportunistic attitude, with strong optimism being pinned against the current price levels”, the shipbroker concluded.
Nikos Roussanoglou, Hellenic Shipping News Worldwide