Highlights:
The Panamax index remains in bearish territory and is now looking to test the long-term range support.

The RSI and Stochastic are signalling a trending environment and we will need to see price action make a new high for the technical to be regarded as bullish.

The May futures remain technically bearish.

However, there are signs that momentum is slowing down based on price action and the 21 period RSI as we approach long the rolling contract support.

The Q3 futures remains below its key averages which keeps the technical in bearish territory.

However, price action has produced a lower high and higher low which should be regarded as neutral.

Outside of the neutral range we have a secondary support and the 55 period MA as resistance suggesting we need to see price action below USD 11,950 or above USD 12,515 for technical confirmation.

The Cal 19 futures is the only technical that is showing positive price action in the complex, however the moving averages are in bearish territory. The complex is showing signs it could base soon but is countered by negative returns in May on the seasonality chart. 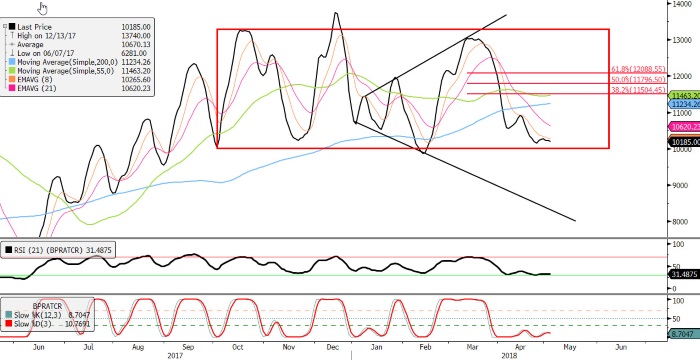 The index continues to find resistance at the 8 – 21 period EMA’s and is now looking to test the long-term range support at USD 9,856.

The stochastic and the RSI remain in oversold territory, however this is a function of a trending environment and technical direction will need to come from price action at this point.

Upside moves that trade above USD 10,261 would create a new high, however this is from flat price action suggesting that we probably need to close above USD 10,914 for confirmation that the technical picture is starting to firm. Preferably with the 8 period EMA crossing the 21 period EMA.

Technically bearish but entering a long-term support zone. This technical should be regarded as bearish until it produces a higher high. 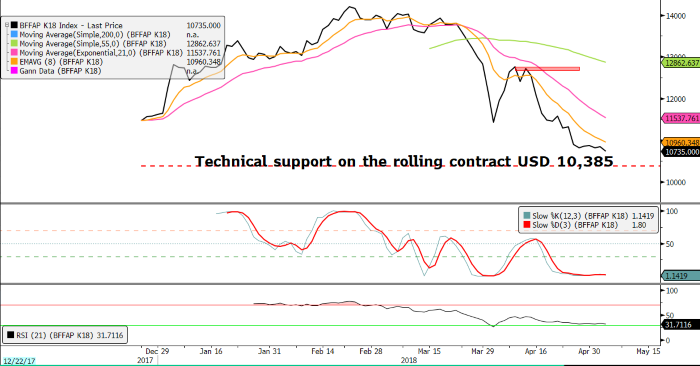 The last report highlighted the technical resistance that had formed between the 8 and 21 period EMA suggesting upside momentum was begging to fade, with the technical in bearish territory. This has resulted in the May futures moving 14.5% lower.

The stochastic is at an extreme low signaling a trending environment, however the 21 period RSI is showing a bullish divergence as we approach technical support on the rolling contract at USD 10,385.

Price action has now started t flatten signaling that downside momentum is starting to weaken. However, the technical remains in bearish territory until it produces a fresh market high above the USD 11,580 resistance unless we see a lower high form in between.

Technically bearish the RSI and price action are warning that downside momentum is slowing as we approach technical support. 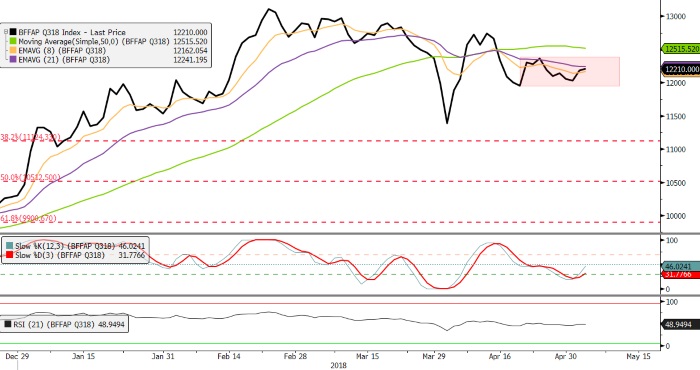 The overbought stochastic on the last report warned that the momentum was potentially slowing down and this has been the case with price action dropping back USD 1,700.

The technical has now entered neutral territory having produced a lower high and a higher low with the EMA’s flattening out, indicating market neutrals should remain out of the market.

Although near term price action is neutral it remains below the shorter period EMA’s which are below the 55 period MA which keeps the technical in bearish territory.

Upside moves that close above the USD 12,365 resistance would create a higher market high indicating the technical picture is firming. However, there is further resistance at the 55 period MA at USD 12,515 which has the potential to limit the upside move in the near term. Downside moves that close below USD 12,030 would be regarded as technically bearish though it wood need to close below USD 11,950 for confirmation as the market has produced a support zone. 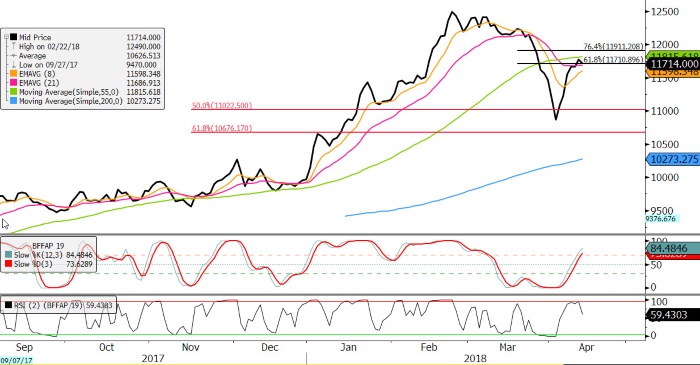 The Cal 19 futures have recently made a fresh market high indicating the technical picture is firming, however price action remains below the 55 period MA at 11,851 which has the potential to act as a resistance.

Technical support is at USD 11,444, a close below this level would suggest the technical is again weakening with the potential to test the
lows at USD 10,863.

It is worth noting that the front-end futures and the index are approaching support whilst the Q3 futures are neutral with Cal 19 price action firming in a bearish trending environment.

The Panamax complex remains in bearish territory but there are signs of the market starting to base as it approaches support levels, indicating downside moves could becoming limited from here. May historically is a negative month for the index based on 3 and 5-year averages, however if the technical picture is correct and we do base we could have more productive June which is historically more positive.
Source: Freight Investor Services (FIS)