The dry bulk market seems to be settling down to yet another bearish period, after third quarter’s rebound. In its latest weekly report, shipbroker Allied Shipbroking noted that “with the dry bulk market having shown a gradual downward correction over the past couple of weeks, a gradual pessimism seems to be creeping back into the market. Yet, when you look at the numbers a bit more closely it seems as though the market has been plagued by a bearish outlook for some time now, while few seem to have been convinced by the impressive market rally during late summer and the impressive 10- year high peak in freight rates noted during early September. In fact, given that we are still seeing average freight rate figures for Capesize bulkers still holding at levels well above the US$ 24,500 per day mark (a level which is well above US$ 5,000 per day more than the highest level seen during the final quarter of 2018) one would expect sentiment to be considerably more bullish than it currently is”. 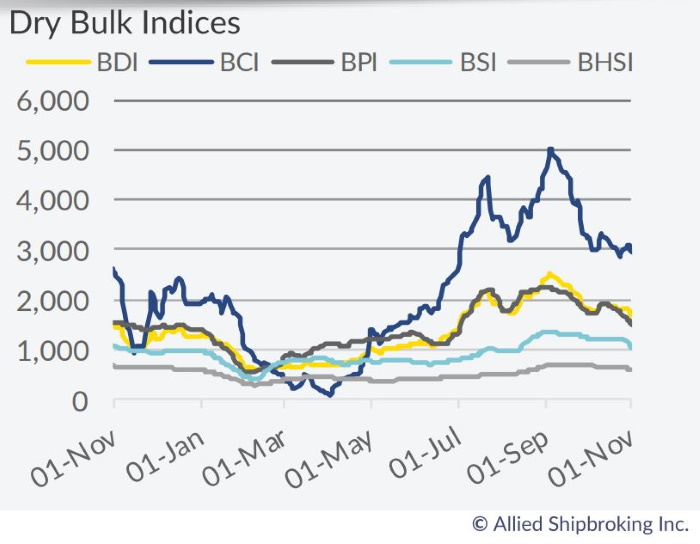 According to Mr. George Lazaridis Head of Research & Valuations with Allied Shipbroking, “still with a focus on the Capesize market, the paper market is currently expecting 2020 to note on average US$ 15,231 per day for the 12-month period, a level which is US$ 1,226 per day lower than the average TCE noted back in 2018 and US$ 2,273 lower than the average noted year to date in 2019”.

He added that “the paper market however is not alone in this bearish forward outlook for the market with activity in the secondhand market being 68% down than what was seen during the same 10-month period back in 2018, while new ordering activity is currently less than half of what it was. Secondhand prices are also softer, though to date only marginally, largely thanks to the still firm freight earnings. Is there a basis however for this poor forward sentiment currently being expressed, or is it a mere byproduct of the intense and extreme volatility noted during the past 12 months? The reality of the matter is that there are a number of “gray clouds” seemingly building up in the horizon, a mere fact that could get most in the market a bit spooked. Yet global steel production, a major driver for the Capesize market, has been noting impressive growth figures to date, with 2019 expected to close with a year-onyear increase of around 3 percent”, Lazaridis said. 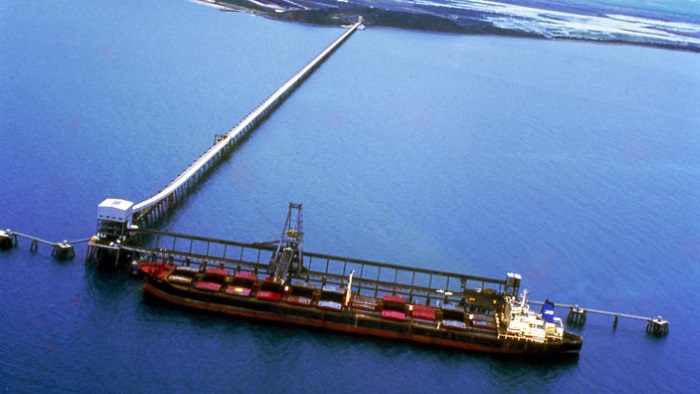 Allied’s analyst went on to note that “under normal conditions logic would follow that this momentum should continue over into 2020, yet concerns are starting to rise as to the potential fallout from the US-China trade dispute. The fear is that the global economy will continue to slow down over the next couple of months, something that would lead to increased difficulty in sustaining a strong demand for steel consumption in China as well as globally. Furthermore, China’s economy has already shown signs that it is slowly moving over to the next stage of its economic development (History has shown similar trends in the US, Germany and particularly Japan), reaching a peak in terms of their commodity consumption, with steel usage likely to enter a multiyear trend decline. Under the perception of most however, we don’t seem to be there just yet. China’s growing appetite may well have slowed down, but it would seem that it still has its finger firmly pressed on the infrastructure spending “button”. The year ahead obviously has a lot of hurdles set for the dry bulk market and more specifically for Capesize vessels, yet it still looks too early to call such a pessimistic outlook just yet. The market is still looking to be well balanced in terms of demand and supply, while despite all this geopolitical turmoil that has transpired over the past year, we are still seeing firm production and demand figures being churned out by the global economy as a whole. Could all this mean that we are currently finding ourselves in the midst of a good pricing opportunity in the market, or are we simply on the cusp of a big shift to come?”, Lazaridis concluded.
Nikos Roussanoglou, Hellenic Shipping News Worldwide