Despite the trade wars and the contraction of the Chinese economy’s growth rate, dry bulk owners could rejoice in the knowledge that the dry bulk market remains largely unaffected. In a recent monthly report, shipbroker Banchero Costa noted that “China’s iron ore imports increased again in August 2019, to the highest level in 19 months, boosted by rebounding supplies from the major miners and mills replenishing inventories. In August, China imported 94.9 mln tonnes of the steelmaking material, according to Customs figures, up 4.2% monthon-month from 91.0 mln tonnes in July 2019, and up 6.3% year-on-year compared to 89.2 mln tonnes in August 2018”. 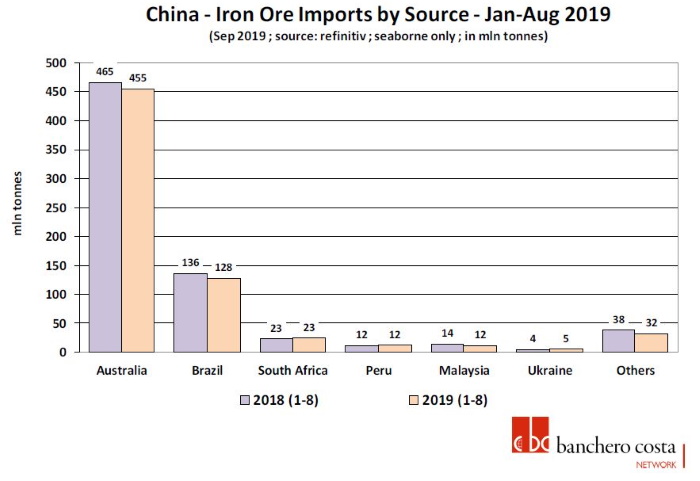 “This was the second month in a row that recorded positive year-on-year growth, following the disappointing volumes in May (-11.0% y-o-y) and June (-9.5% y-o-y). In the first 8 months of 2019, total imports of iron ore reached 684.9 mln tonnes, still down 3.5% year-on-year from the 710 mln tonnes imported in the same period last year. Low import volumes in the first half of the year were primarily due to shortages in supply, which resulted in a 40 mln tonnes decline in stockpiles at Chinese ports between March and July of this year. However, it now seems that the supply side of the equation is slowly getting back to normal. Out of the total 684.9 mln tonnes of iron ore delivered to China in January to August 2019, 127.8 mln tonnes or 19.2% came from Brazil. This was down 5.7% from the 135.5 mln tonnes seen in the same period last year”, said the shipbroker.

Meanwhile, another market for dry bulk carriers, could be on the mend. Banchero Costa said in a recent note that “South Korean coal imports were running significantly below expectations in the first half of 2019, but now appear to be recovering quite strongly in the third quarter of the year. In the first 6 months of 2019, South Korea imported 59.4 mln tonnes of coal, including both thermal and coking grades, according to vessel tracking data from Refinitiv. This was a disappointing -4.9% year-on-year from the 62.4 mln tonnes which arrived in the same period of 2018”.

“However, the last two months – July and August – have shown significant improvement. In these two months, the nation imported 23.6 mln tonnes of coal, up +8.6% year-on-year from the same two months in 2018. The total for the first 8 months of 2019 is hence 83.0 mln tonnes, just -1.3% year-on-year, and if current trends continue we could even see 2019 end roughly in line with last year. In 2018, total coal arrivals to South Korea based on vessel tracking reached 124.7 mln tonnes, which was -4.1% down on the record 130.0 mln tonnes of 2017, but still nevertheless higher than the 123.1 mln tonnes of 2016. Australia, Indonesia and Russia are the three largest sources of imported coal to South Korea: in the first 8 months of 2019, 41.3% of total South Korean coal imports were from Australia, 19.0% were from Indonesia, and 16.5% were from Russia. Canada, Colombia and South Africa are other important sources”, said the shipbroker. 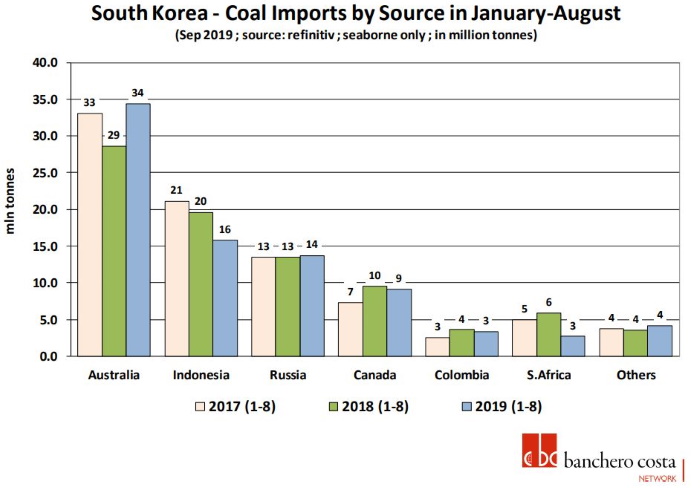