Like it or not, consolidation in the shipping sector remains necessary for survival, especially in light of declining freight rates for the dry bulk sector. With the Baltic Dry Index down almost 800 points in just three months, the prospect of consolidation, whether through mergers or acquisitions, is rearing its head again. In November, MTS Logistics president Sedat Saka, writing for American business magazine Forbes, predicted that consolidation in the shipping industry would continue this year — noting that it has become hard to survive as an independent shipper with a fleet of ships. His prediction may prove to be prophetic.

Consolidation, as well as growth, was the topic of a panel discussion at the 10th Anniversary Marine Money London Forum, which took place in the UK capital in January. Moderated by Jovi Tenev, partner at law firm Holland & Knight, the panel included discussion of how public businesses grow when their share prices are trading below net asset value (NAV). Michael Kirk, managing director and co-founder of RMK Capital, which delivers advisory and capital-raising services to the maritime sector, said that consolidation for consolidation’s sake, and growth for growth’s sake, is not to be what firms should be doing. 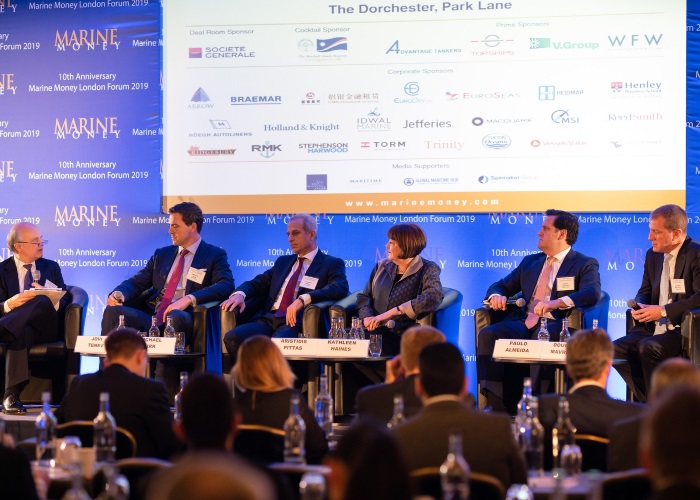 “I think you’ve got to have a smart acquisition, a smart way to grow, and then you’ve got to try to grow in a way that’s not deluded to your shareholders,” he said. “If you’ve got to trade shares below NAV, if you’ve got to issue shares below NAV, that acquisition’s got to be accretive even with that. Alternatively, you can look at structures such as some kind of convertible security where maybe the security ultimately converts into equity at a higher level; you’re close to or above NAV but the investor has some protection. Ultimately, there’s a bitter pill to swallow to get there, but the idea is you’re growing for a good reason and so there’s a reason to take that pill.”

Paolo Almeida, portfolio manager for Asset Backed Investments at fund-management firm Tufton Oceanic, added that NAV-for-NAV merger is the other option for growing when trading below NAV. However, Euroseas chairman Aristidis Pittas said that consolidation is “by no means the solution to everything”.

“What investors want is profitability — to make profits — and this is the important thing,” he said. “To grow just to grow doesn’t really solve anything. It creates additional levels of management, more bureaucracy. It becomes more difficult to change course, to take decisions. There are quite a few drawbacks in a bigger company.”

Discussing the recent consolidation witnessed with dry bulk cargo shipping company Star Bulk, Mr Pittas said: “I don’t think that having an organisation which is that big offers any concrete advantages over the smaller, more nimble organisation. It offers one great advantage, which is easier access to big capital.”

Kathleen Haines, treasurer and chief financial officer at tanker operator Heidmar, said that previously, especially when shipping was going through a tough time, debt was being purchased by private equity.

“Now these guys have been in for a long time,” she continued. “They want to figure out some way to get out of their investment. I’m not actually sure that consolidating helps them other than, the theory is, bigger, better float … If you combine two or three companies that have big equity partners, you now have five or six big shareholders, so it could make it harder, in fact.”

“We want to be seeing growth in profits, not growth in size, and this is not exactly the same thing,” said Mr Pittas. “Growth in size doesn’t offer something substantial unless you are so big that you become an oligopoly or close to a monopoly or you can dictate terms, and we are very far from that in most of the shipping markets. The only area … where we’ve seen a few companies oligopolise the market … is the container sector — not the owners but the logistics companies, and there we have much fewer companies. Still they are not profitable, so what’s the benefit?”

During the panel on consolidation at the event, two polls were undertaken on the topic: the first on whether consolidation is helpful for shipping firms and the second on whether consolidation is helpful for the shipping sector. With regards to the former poll, the result was a 74.5% vote in favour of yes and a 25.5% vote in favour of no in response to the question: “Is consolidation beneficial for shipping companies?”. When it came to the latter (the question being “Is consolidation beneficial for the shipping industry?”), the result was a 71% vote for yes and a 29% vote for no. Clearly, in the eyes of most of those assembled for the panel, coming together has its advantages.

Key takeaways from the session were that consolidation is not the solution for everything; that investors desire profitability, not just size; and that drawbacks often exist to running a bigger firm. Additionally, growth in size does not provide that much advantage unless the party is so large it is able to dictate the market, as can be seen with the larger container shipping lines. Further, at least 20 to 25 vessels are needed to get the benefits of management and commercial advantage, though for a public company, a big fleet is necessary not so much for operational reasons but to get institutional investors’ attention.
Source: The Baltic Exchange

Previous: Signing of a Memorandum of Understanding between Piraeus and the Ports of Venice and Chioggia to strengthen the cargo flows
Next: China’s Steel Exports Could Rebound in 2019, Shifting Dry Bulk Trade Flows