A new rally could be on its way for the Capesize market, which could lead it to even higher grounds than its recent peaks. In its latest weekly report, shipbroker Intermodal said that “the dry bulk market’s counter seasonal surge so far into the first half of the year -in a sort of 2010 manner – and Capesize’s recent retreat from almost 11-year highs is raising the question whether a counter seasonal market drop is in the cards during the 2H of the year in the context of a broader market upcycle”.

According to Tamara Apostolou, Research Analyst with Intermodal, “while the market is multi-factorial with fundamentals, sentiment and inter-freight correlation amongst sizes feeding one another, the current Cape market correction was exacerbated after Chinese authorities intervened to curb iron ore price speculation. A subsequent sharp reversal of iron ore and steel prices from record highs and FFAs selling off contributed to pulling the Cape market lower, while the smaller segments were unaffected. It is well known that Capesize is characterized by the highest freight volatility and even though that we expect volatility to keep up, we are not convinced that this is the turning point for a prolonged market correction. Fundamentals are likely to outlast volatility and we cannot exclude that the next leg higher will find a much higher peak over the next two quarters with cargo export seasonality emerging stronger across all commodities and particularly iron ore”. 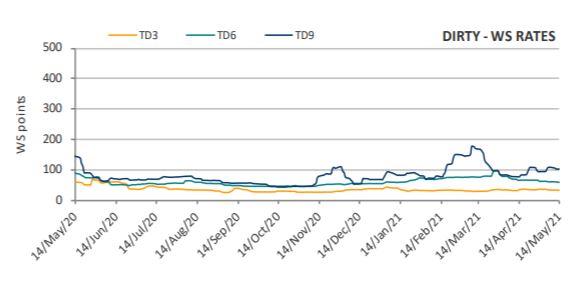 Ms Apostolou added that “iron Ore exports to accelerate in 2H2021; the urge for higher quality iron ore is likely to intensify: China’s iron ore inventories have been destocked by more than 8.0 million tons over the past month amid elevated demand and major iron ore miners running behind their export guidance, likely to trigger a new restocking wave. Forward iron ore prices on the curve, even if spot iron ore prices softened from here, incentivize iron ore miners to accelerate exports during the 2H2021”.

“So far, China’s emissions regulations on steel production were unsuccessful in containing it. Record high steel mills margins incentivized higher steel production ex. strictly regulated Tangshan with YTD Jan-Apr crude steel production up +15.6% y-o-y. If steel production controls intensify during the second half, this will further increase demand for high quality iron ore, in order to optimize the steel process. In addition, the scrap scramble from steel mills outside China could put a lid on China’s increasing scrap usage in the steel mix in the short term. Macro indicators continue to be bullish for dry bulk demand in the next quarters: China’s Property new starts – a leading indicator of steel demand – have increased +19.0% YTD in 2021, while April’s y-o-y growth slowed down at +9.3% y-o-y. Any slow down in the growth of new floor space under construction will not immediately translate into lower steel and iron ore demand; developers are likely to accelerate property completions from now on continuing to drive demand”, Intermodal’s analyst noted.

She added that “other than China, global steel production and demand conditions are robust, reflected by record high steel prices both in the US and Europe. Spot and forward steel prices have surged, giving steel mills the opportunity to hedge at profitable levels, therefore global steel production will continue to expand. Global manufacturing PMIs are at 10 year cycle highs, despite having softened during April and lead demand for commodities. Oil prices have been lagging the rise in other commodities and are projected to increase significantly over the next two quarters, which could provide further support to the dry bulk market via – and not limited to – the bunker-$ per ton freight- speed relation. Fundamentals of other dry bulk commodities are also robust, with electricity generation set to accelerate over the summer in addition to increased industrial production, while China’s domestic coal production is underperforming amid mine safety checks”, Apostolou said.

Intermodal’s analyst also commented on “early signs of credit tightening: Following a record high stimulus over the previous year, latest credit growth figures in China indicate a slow-down in credit supply during April, however as long as inflation at the producers level accelerates the tightening impact is muted in our view. China’s potential deleveraging from here should not be expected to have a negative effect on dry bulk commodities demand, until credit tightening starts to interfere with producers’ profit margins”.

“Last but not least, China’s political tension with Australia is more likely to translate into higher ton-miles in the medium term, with Atlantic production of high-quality iron ore and coal substituting for any potential loss of Australia’s market share. In the longer term, China’s 14th year plan that calls for an increase of electric arc furnaces (scrap) in steel production to 15-20% by 2025 and self sufficiency share of iron ore above 45% will certainly have an impact in the way iron ore is procured with China having higher control over both supply and iron ore prices”, Apostolou concluded.
Nikos Roussanoglou, Hellenic Shipping News Worldwide