A boom in the dry bulk market over the course of the past quarter has helped turn the tables around in terms of sentiment. As such, the gloom which had prevailed up to that point, gave way to a renewed optimism, regarding the market’s long-term prospects.
In its latest weekly report, shipbroker Allied said that “it’s been an astonishing climb in the dry bulk market these past few weeks. With the help of a fast-paced increase in freight rates in the Capesize and Panamax markets, the BDI has reached a level last seen in December of 2013 (though it must be noted that we are now looking at a new BDI with much bigger weighting on the Capesize market). The Capesize market has been the one that has made the most remarkable upswing, with the BCI Time Charter Average having increased by US$ 29,503 (equivalent to an 853% increase) since the 2nd of April of this year and the BPI Time Charter Average having increased by US$ 13,162 (equivalent to a 297% increase) since its bottoming out on the 4th of February”. 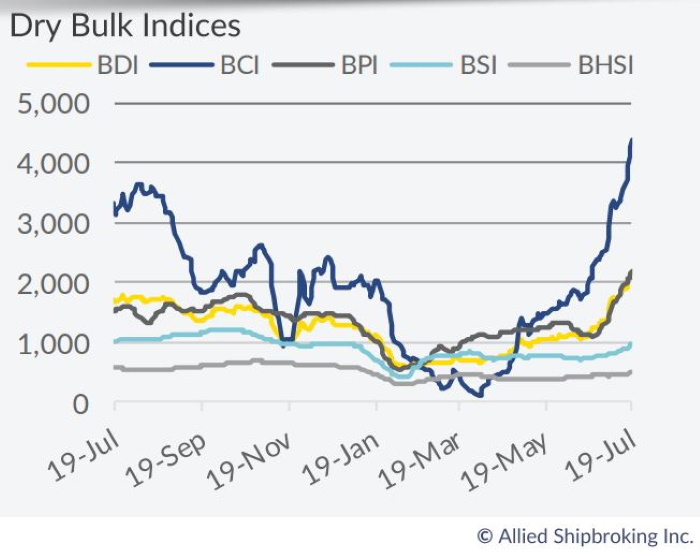 According to George Lazaridis, Allied’s Head of Research & Valuations, “on the face of it would seem that just by looking at these two market performance measures that this most recent spike in rates is all about the Capes. However, in taking a closer look it quickly becomes apparent that Panamaxes have managed an equally impressive feat during these past couple of months. The last time the BPI -TCA was at levels of equal or above US$ 17,348/day was back in mid-December of 2010. In comparison, the BCI – TCA was last seen at levels of US$ 32,765/day back in mid-January of 2014, while the Supramax TCA has not managed to brake above its highest level of 2018 and the Handysize hasn’t even managed to post a new high for 2019. Going beyond performance measures, it is rather evident that the mood has changed in the market too, with a deep sense of optimism now having taken hold of most in the market, having almost wiped clean all recent memory of the troubled days that were being faced during the first quarter of 2019. In part this drive has been helped by the ramped-up activity being noted in iron ore shipments, as traders look to cover the gap that was left behind in the wake of the vale damn disaster back in January”.

Lazaridis added that “its no surprise that all three of the world’s largest iron ore producers, namely Vale, Rio Tinto and BHP Billiton, have all downgraded their initial estimates for the year, while the two Australian behemoths are expecting to record their first decline in annual exports this century. The supply disruptions in Brazil and Australia (Western Australian mines were hit by severe disruptions as part of a tropical cyclone and a major train derailment) have pushed for a seasonal spike in shipments during these summer months as most producers look to play catch up game to recover the lost export volumes noted during the first quarter of the year, while Vale and BHP are also likely to be seeking to move as much volume as possible during the summer months prior to their respective scheduled major maintenance plans in autumn”. 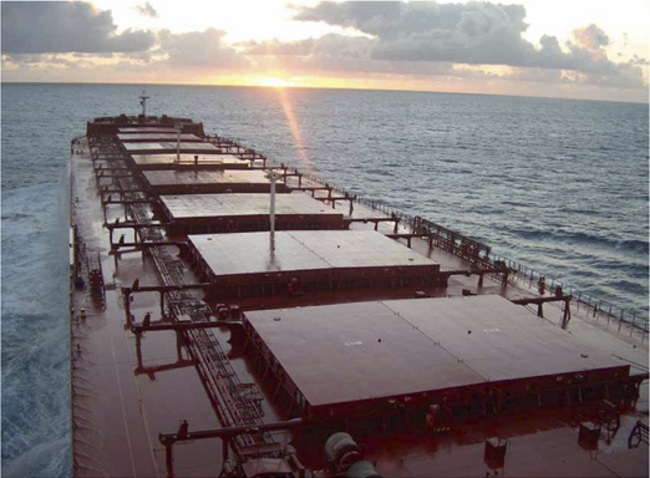 “At the same time the ferocious appetite seen of late by steel producers in China has helped keep a positive momentum, while the high prices of above US$ 120 a tonne noted of late have kept things moving at an ever-faster pace. Of course, a ramp up in grain activity in the Atlantic has also helped provide much needed support for the dry bulk market, though as can be seen in the performance of the smaller size segments, it has played a secondary role for the time being. This most recent spike in freight rates has helped cover lost ground and it now looks as though we are back on the recovery trend that was laid down since the bottoming out of the market back in 2016. We shouldn’t sigh in relief just yet however, as this balance is still fairly fragile in nature, and given the continued risks at play, it could easily collapse almost as quickly as it came to be”, Allied’s analyst concluded.
Nikos Roussanoglou, Hellenic Shipping News Worldwide

Previous: What consequences do growing tensions in the Strait of Hormuz have for the wider shipping industry?
Next: Tanker Market Rates 27/07/2019