Dry Bulk Market in Best Annual Start in a Decade

The dry bulk market is enjoying its best annual start in a decade, thanks to a big rise in demand and supply chain disruptions. In its latest report, shipbroker Allied Shipbroking said that “with the first quarter of the year having come to a close, we can already see the exuberant aftermath of the sharp rally that has taken place during the course of these three months. The dry bulk market has made its most promising start to the year for at least a decade. Freight rates have been quick to set new records as the weeks progressed and overall activity and trade seemed to have fired up. Yet as March came to a close, things started to subside on the freight market front”. 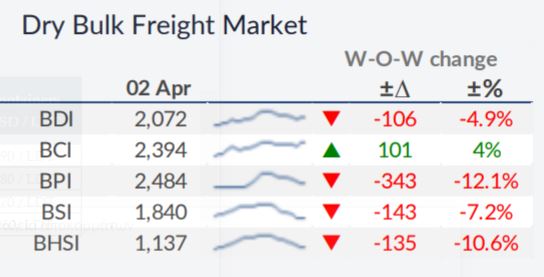 According to Allied’s Head of Research & Valuations, George Lazaridis added that “with much of Europe and the US seeing a slower pace as part of their Easter holidays, the market was able to take a slight step back from its previous highs. Yet the positive momentum still seems to have a hold on the market. Sentiment is still positive and there is ample of evidence of over exuberance still around. Taking a look at longer-term trades, you can still see an upward pattern holding firm”. 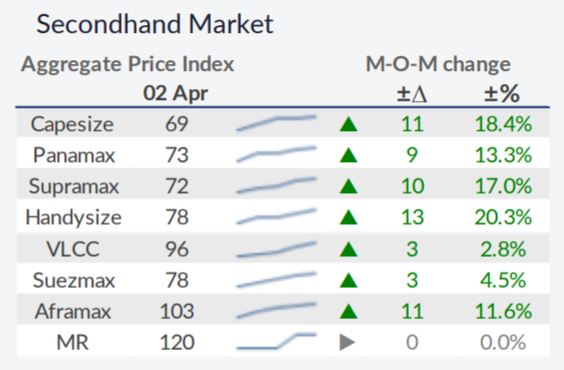 Lazaridis said that “nowhere has this been more evident than in the second hand dry bulk market. Asset prices have more than recovered the losses they witnessed this time last year and have shown to still hold one of the quickest rallies on recent record. Prices have jumped on average around 15% year-on-year, while if we look at only 5 and 10 year old assets the average year-on-year increase has been 28%. What is more remarkable is that the majority of this increase has taken place over the past 3 months, while early April 2020 wasn’t even the absolute bottom in asset prices”. 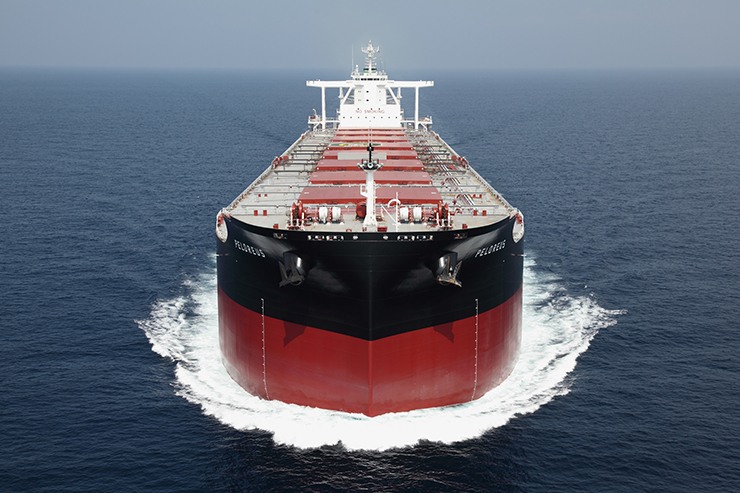 He added that “at the same time, this trend doesn’t even seem to be over just yet. The positive momentum is still holding its pace with further gains looking to be made over the next month, while it looks as though it will take time before this upward trajectory has run its course and we start seeing prices stabilize. Buying appetite has seemingly been abundant in recent weeks, while we have also seen an exponential increase in transactions being reported. At this point the only downside seen in the market is the stand off approach that is slowly being taken by many sellers who are hoping to hit higher prices, something that only goes towards further feeding the price hike being noted”, Allied’s analyst noted.

“At the current rate, it doesn’t look as though it will take long before we are able to hit the high point of 2014 in asset prices. While given where we have reached in terms of freight rates, even those asset prices would not seem too farfetched, given that the last time we noted such high levels in the freight market was more than 10 years back. All and all, we are looking at a market in sharp contrast to both what was going on last year, as well as what we have been seeing over the past 5 years to say the least. The market is surely in the midst of a sharp change, while it looks as though market fundamentals are there to support this change in direction. Pent-up demand may have been the cause for the initial spark, yet it has been longer-term market drivers that have now seemingly pushed for this relentless market rally of late. The question therefore seems to now be focused more so as to the rate of improvement that will unfold over the coming months rather than anything else”, Lazaridis concluded.
Nikos Roussanoglou, Hellenic Shipping News Worldwide