As the dry bulk market is facing strong headwinds, due to the adverse effect of the Coronovirus crisis in global trade, it’s worth taking a look back into 2019 and the markets which could offer some respite to China’s slowdown, like for instance, India. In its latest weekly report, shipbroker Banchero Costa noted that “despite repeated promises from India’s government to reduce the country’s coal imports and increase domestic self-reliance, volumes just continue to rise. In the 12 months of calendar 2019, India imported 206 mln tonnes of coal, including both thermal coal and coking coal, but excluding petcoke, based on Refinitiv vessel tracking data. This represented an increase of +5.1% y-o-y from the 195.9 mln tonnes imported in 2018, and was +11.0% more than the 185.6 mln tonnes imported in 2017”. 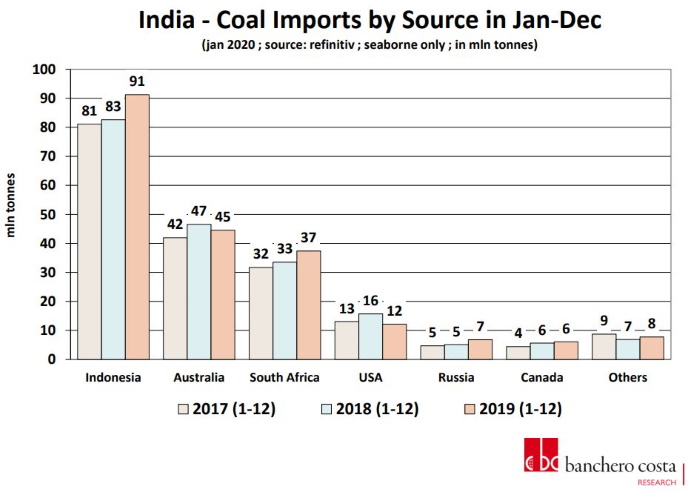 According to Banchero Costa, “what is surprising, is that imports are rising despite India’s sharpest economic slowdown since the global financial crisis. Logistical challenges, heavy rains and frequent strikes and protests have hit output at state-run Coal India, which accounts for more than four-fifths of India’s coal production. Utilities in particular increased coal imports in 2019 despite electricity demand growing at the slowest pace in six years as the broader economic slowdown stifled industrial output. The biggest increase reportedly came from Adani’s “Ultra mega” power plant in Mundra, Gujarat state, with its shipments rising 75% to 17.35 mln tonnes. There has also been some reshuffling in trade patterns, as some suppliers have benefitted more than others. Indonesia remains at the top spot in 2019 as the largest supplier of coal to India with 91.3 mln tonnes, +10.5 percent y-o-y and now accounting for 44 percent of India’s total seaborne coal imports. Australia, however, shipped only 44.5 mln tonnes of coal to India in 2019, down by -4.3% y-o-y. Nevertheless, Australia remains in second place, accounting for 22% of India’s total seaborne coal imports. South Africa shipped 37.4 mln tonnes of coal to India in 2019, up +11.6% y-o-y. South Africa is in third place, accounting for 18% of India’s total imports. Volumes from the USA have significantly declined this year. India imported 12.2 mln tonnes of coal from the USA in 2019, down by -22.4% y-o-y. The USA still account for 6% of India’s imports. Imports from Russia surged by +33.1% y-o-y to 6.8 mln tonnes. Shipments from Canada also increased, by +8.6% y-o-y, to 6.1 mln tonnes”, the shipbroker said. 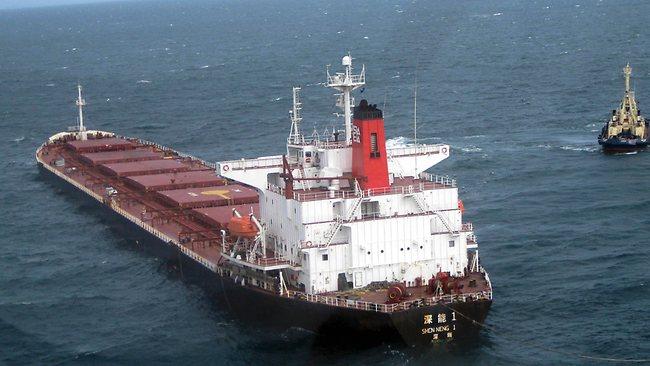 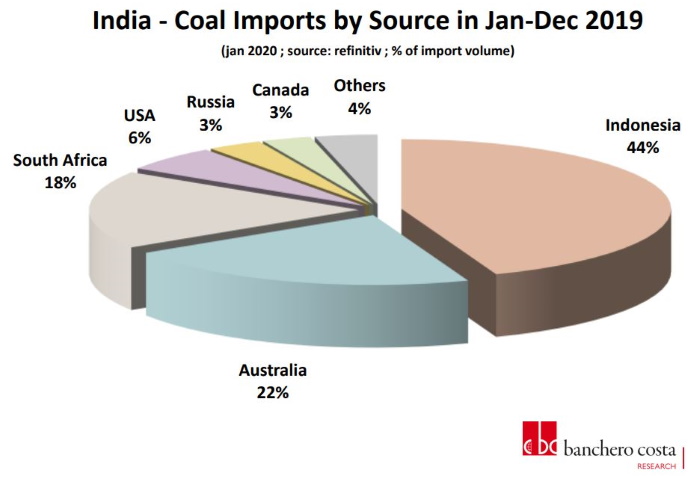 Meanwhile, according to the latest data, India’s coal import increased by 7.6 per cent to 185.88 million tonnes (MT) in the April-December period of the current fiscal. Coal imports in December rose by 13.3 per cent to 20.52 MT compared to 18.10 MT in the year-ago month, according to provisional data by mjunction services. Non-coking coal imports were at 14.21 MT in December 2019 against 12.5 MT in December 2018. Coking coal imports were at 4.47 MT against 3.76 MT imported in December 2018. Going forward, import demand may subside a little due to current volatility in non-coking coal prices and increased supply of coal from domestic sources.
Nikos Roussanoglou, Hellenic Shipping News Worldwide

Previous: IMO bunker charge confusion spreads – but what next?
Next: Tanker Market Rates 04/02/2020