Dry Bulk Market: Is the Recent Rally a Seasonal Effect or Is the Rebound Sustainable?

The story of the past few days is the recent rebound of the dry bulk market, which has now reached a 5.5 year-high. In its latest weekly report, shipbroker Allied Shipbroking said that “feeding off the formidable jump in dry bulk freight rates that has been noted since mid-June, we have seen a fair amount of optimism emerging in the market once again. As impressive as this may seem however, to what extent are we looking at a shift in market fundamentals taking place and to what extent is it just a seasonal rally that will likely subside once the typical market normality returns once more. Looking at the bread crumb trail, it starts to become more and more evident that this recent rally has been, to a considerable extent, driven by the jump in iron ore demand that has been witnessed of late”. 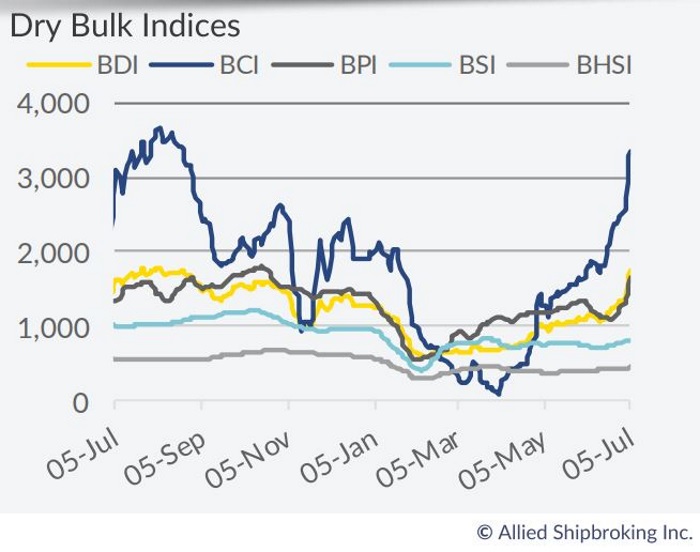 According to Mr. George Lazaridis, Head of Research & Valuations with Allied Shipbroking, “prices for Iron ore reached a fresh peak this past week, matching a price level last noted back in 2014. Albeit, that to a great extent this has been driven by the crunch in supply after the Vale dam accident back in January, there has been a fair drive seen during the past couple of weeks on the demand side as well, which has helped boost market conditions. Chinese demand for Iron ore has spiked recently as increasing prices for steel have pushed many steel mills to ramp up their production levels while also trying to rebuild most of their iron ore feedstock piles. From all this the capsize market has been quick to respond, having been plagued by a lackluster 1Q and 2Q”.

Lazaridis added that “the healthy fleet development figures have started to show face here, while charterers seem to have been in a fairly big rush to fix any and all vessels that they could find on a prompt basis. All this has been taking place during a period that has over the past couple of years shown to be a seasonal high point in demand for dry bulkers and we have found ourselves in the midst of a perfect recipe for a fair market rally to take shape. At the same time, we were witnessing a strong pull from the Capesize market on that of the smaller size segments, while most of these size segments were also feeding off some increased grain activity that was taking place in the Atlantic basin. The most impressive example of this has been that seen in the Panamax market, with the BPI-TCA noting this past Thursday its biggest one day jump since 2013”. 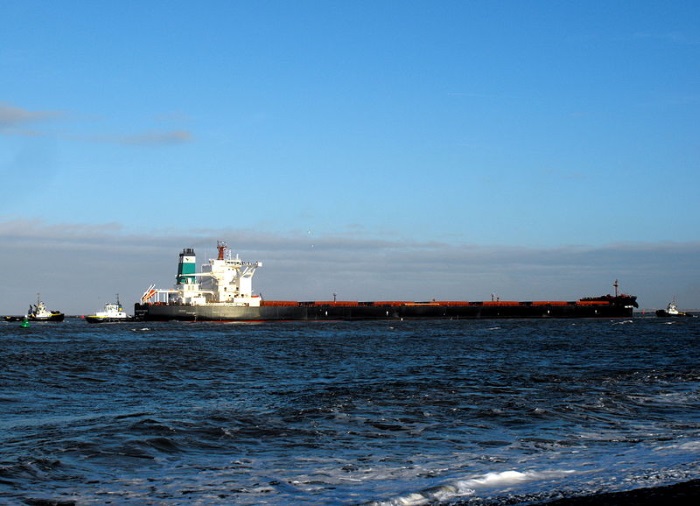 According to the Allied’s analyst, “for now, it looks as though we are still riding on this positive momentum, with most of the smaller size segments still showing positive gains for the time being. Yet it looks as though the initial market pull has lost some steam and come late summer we may well be seeing a fair bit of freight market corrections taking place. All in all, this latest rally may not have been able to show that the market is in perfect shape and that we will be able to sustain these recent spikes in freight rates for longer periods of time. However, it does help point out that a reasonable amount of balance has been achieved in terms of demand and supply, something that may well prove to be invaluable in helping get the market back on the recovery path we were witnessing back in late 2017 and early 2018. There are still several considerable obstacles to over come on the demand side of things, with poor demand growth figures still being anticipated for 2019 as a whole. Yet with the fleet supply being relatively constrained, there is room for a steady improvement in average freight levels to take place. All this of course comes with a big if and is highly dependent on the fact that we will not see any more extreme (tail risk) events take place like those that were noted during the end of 2018 and early 2019”, he concluded.
Nikos Roussanoglou, Hellenic Shipping News Worldwide