The Capesize market has taken a turn for the worse, after a sustained period of rises, with owners now worried that the market could be overcorrecting. In its latest weekly report, shipbroker Allied Shipbroking said that “the enthusiasm amongst Capesize owners has now been replaced by increasing concerns over the deep correction that has been noted of late. Undoubtedly the slower demand for iron ore shipments to China, the world’s top importer, has brought about a pause in the fixing frenzy that had driven the astonishing 346% rise in the BCI during the first nine months of the year. Preliminary data shows that the volume of iron ore imports declined during October to 91.61 million tonnes, posting a monthly drop of -4.2% and a y-o-y drop of -14.2%. The driver behind this sudden change has certainly been multifaceted, but with the country’s environmental goals being undeniably a major point. As part of Beijing’s environmental strategy, the government has set strict energy intensity targets for each province, making its environmental goals a major priority.

Under this framework, the steel sector is considered as one of the most polluting industries, producing around 15% of the country’s total carbon emissions. Therefore, it comes as no surprise that strict measures have been taken up for the industry. In particular, the aim is to have a zero growth in steel production during 2021, which means that output should not surpass 1.06 billion tonnes. Given that steel production for the first 9 months had already reached a total of around 806 million tonnes, expectation is for a significantly slower production pace to take place during the final quarter. What does this mean for iron ore? Less need for raw materials and thus fewer imports of iron ore”

According to Allied’s Research Analyst, Mr. Yiannis Vamvakas, “with steel production set to remain much below its current monthly average and inventories having followed an upward trend since August (as also noted above by the higher imports of iron ore during August and September), demand for iron ore is looking set for a strong step back. Going beyond this, Beijing’s focus is also in holding back a fresh energy crisis, especially during the winter period. This is another reason for the reduction in overall production in the country. All this is reflected by the fact that China’s PMI fell this past month to 49.2 (PMI below 50 indicates a contraction), showing a possible contraction for a second consecutive month. 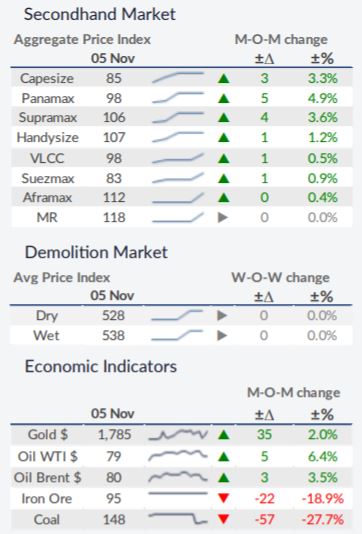 Demand outlook in the segment seems challenging for the remainder of the year, with the above figures illustrating just one part of the whole picture. The overall outlook seems to be negative for the moment, though with the lower iron ore prices and increased port congestion being important factors that could fundamentally shift the final balance in this market”, Vamvakas concluded. 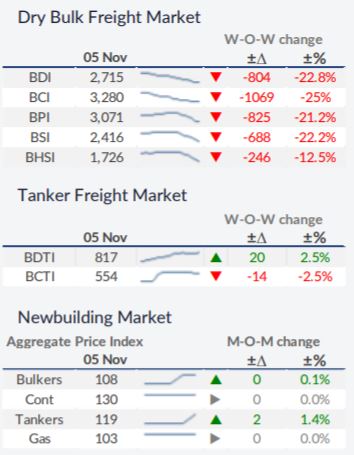 It worth noting that the past week was yet another weak one. According to Allied, “the BCI 5TC lost almost 25% of its value, while finishing on Friday below the US$30,000/day mark. At this point, the overall negative pressure seems attuned across the different main trades. Notwithstanding this, overall sentiment for the upcoming months somehow shifted slightly positive as of late, with many already anticipating some sort of a rebound taking place within the remainder of the year”, the shipbroker concluded.
Nikos Roussanoglou, Hellenic Shipping News Worldwide

A roadmap to aid decarbonisation