Dry Bulk Market Should Stabilize During 2022

Improved demand for dry bulk commodities and a slow fleet growth should improve the freight rate market and act as growth drivers. In its latest weekly report, shipbroker Intermodal said that “it has been another declining week for the dry bulk market and evidently, we are seeing asset values gradually losing momentum as well. Following a restocking spree during September and early October that drove dry bulk rates at more than 13 year highs, the market corrected with a sharp discharge of congestion at Chinese ports flooding the Pacific market with ballasters. At the same time, FFAs are pricing in further weakness in the months ahead and SnP buying interest has decreased, putting a halt to the appreciation trend that has been unfolding since the beginning of the year. It is notable, that traditionally towards the end of Q4 we are seeing a decrease in period rates in view of weaker Q1 – even though Q1/2021 proved counter seasonally positive for the sector- and a slowdown in asset values growth is normally tracking this trend, which could potentially create a buying window until current headwinds reverse”. 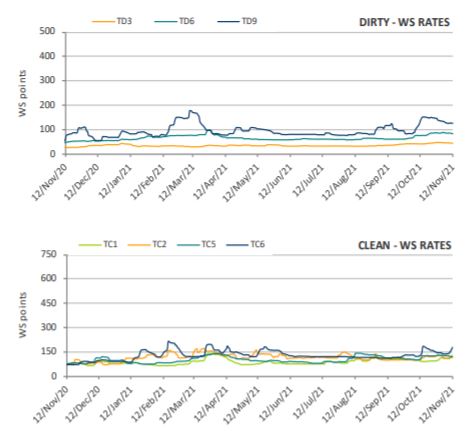 According to Intermodal’s SnP Broker, Mr. Vasilis Moiris, “there are several arguments why the market is likely to stabilize in 2022 and witness improvements. The dry bulk fleet growth factor is clearly supportive for the demand supply growth balance to remain in favor of demand. Nominal fleet growth is projected to be marginal over the next year on the back of low orderbook (~7% of the fleet) and increased shipyards’ deliveries slippage rate following the 2021 flurry in container vessels order”.

“On the demand side, the dry bulk market has benefitted of higher inflation that started from the rally in metal prices, followed by energy related commodities in Q42021. Inflation has been demand driven, triggered by the record high economic stimulus globally combined with supply bottlenecks and years of underinvestment in fossil fuel commodities. Coal continues to remain the bright spot for the rest of the year. The elimination of coal trade between China and Australia combined with a colder winter has supported coal ton-miles in 2021 and expected to continue to do so in the short term as Beijing is trying to boost supply domestically while the heating season amid a La Nina year is still ahead of us”, Moiris said.

“Looking further into 2022, our analysts expect high commodity prices in 2021 priced into the forward curves to trigger a supply response from miners and alleviate disruptions in industrial production stemming from current energy related commodity shortages. A gradual monetary tightening in the context of high inflation marks decelerating economic growth which is normal during the mid-cycle transition, however a slow down in growth does not mean negative growth. China’s decline in credit growth and infrastructure spending is a concern but likely to reverse in 2022 – economic growth is expected to reflate following the end of Winter Olympics in Q1 2022 with a recovery in crude steel production absorbing part of the iron ore stockpiles that are being built during the current quarter and into Q1 2022. Minor bulk growth is also expected to remain firm supported by the US infrastructure bill, as well as the global energy transition requiring minor bulk intensive technologies and along with the easing of steel and aluminum tariffs between the EU and the US will be beneficial for the Supramax and Handysize sector which have been better performers within this year based on ROIC. Finally, global grains demand is expected to remain underpinned amid bumper crops projected from major exporters for the next marketing year – particularly soybeans”, Intermodal’s analyst concluded.
Nikos Roussanoglou, Hellenic Shipping News Worldwide