The Brazilian iron ore export market has always been one of the most important for the dry bulk market, especially given its high ton-mile demand. As a result, the events which unfolded during 2019 are an important indication, as to where the market is heading, going into 2020. In a recent weekly report, shipbroker Banchero Costa said that “the Brumadinho dam disaster in Brazil in January 2019 significantly impacted Vale’s iron ore export capacity this year, leading to significant shortages of iron ore supply on the market and to a spike in iron ore prices, which essentially doubled between January and June. In the first 10 months of 2019, based on Refinitiv vessel tracking data, Brazil exported 281.6 mln tonnes of iron ore, which was down -11.5% year-on-year”. 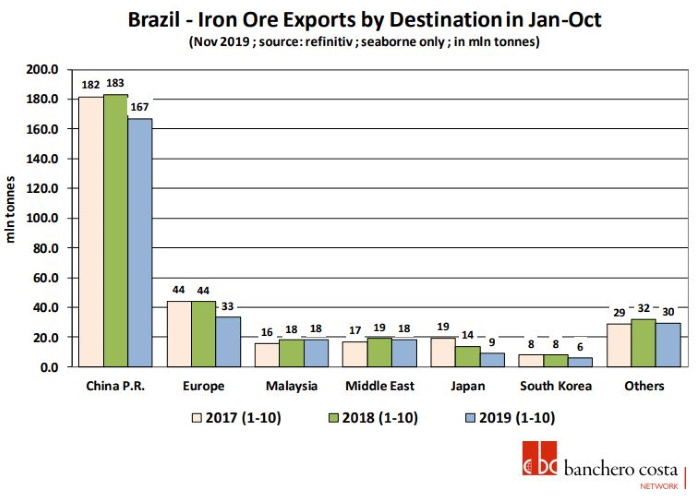 According to Banchero Costa, “the biggest impact on Vale’s export capacity was in March and April of this year when there was a lot of uncertainty about other potential mine closures, and a reshuffling of Vale’s management and operations. Brazilian exporters as a whole shipped just 23.7 mln tonnes in March, which was down -19.5% year-on-year, and then 17.2 mln tonnes in April, which was down -37.6% year-on-year. Although there is now more clarity on the situation, and some previously closed production capacity has restated, there are clearly still a lot of constraints on output. In the last 6 months (May to October 2019), iron ore exports from Brazil have been running at an average of 31.0 mln tonnes per months, which is down -9.9% on the same period last year. August 2019 was an exception, with shipments reaching 36.8 mln tonnes, 0.6 mln tonnes more than in August 2018, helping push Capesize charter rates above USD 30,000 per day”. 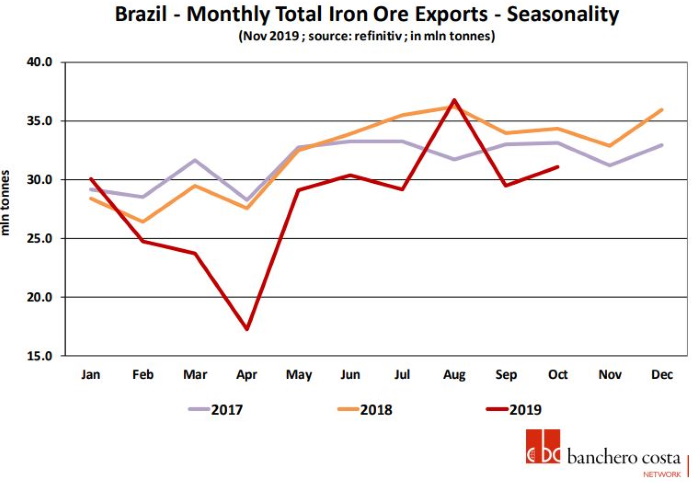