Dry Bulk Market: Where to Next for South Africa’s Coal Exports?

One of the major coal exporters, South Africa is now having to rely more on markets like the ones in the Indian Subcontinent, especially India, in a bid to find buyers for its product. South Africa hasn’t managed to penetrate Far East Asian markets, but it’s faring better in the Subcontinent, where demand is booming.

In a recent report, shipbroker Banchero Costa said that “South Africa’s energy resource base is dominated by coal, and this is unlikely to change significantly over the next decade given the relative lack, for the time being, of a suitable alternative to coal as an energy source. The country is also a major exporter of coal to global markets, but is now facing a long-term decline in its export volumes and a re-shuffling of trade routes. In the first 10 months of 2019, based on Refinitiv vessel tracking data, South Africa exported 55.4 mln tonnes of coal (including all grades). This was a cutback of -6.2 percent year-on-year from 2018, in other words 3.7 mln tonnes less than in the same period last year. Even more worryingly, it was -11.7 percent down from the same period of 2017”. 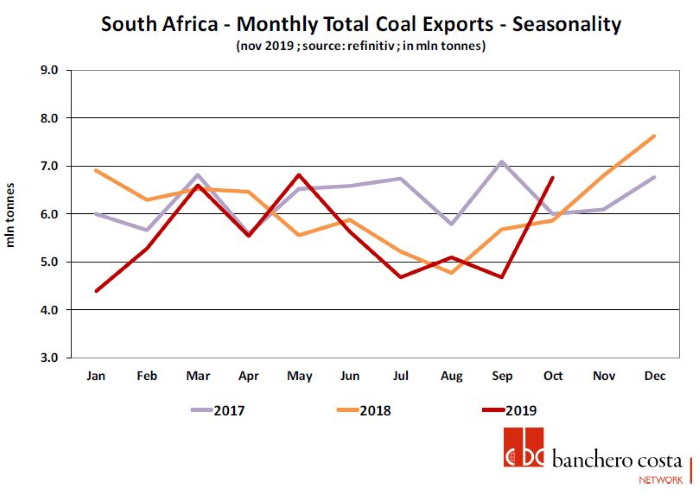 According to Banchero Costa, “the first quarter of 2019 was particularly disappointing, recording just 16.2 mln tonnes, down -17.5% year-on-year. The second quarter was roughly in line with last year, with 18.0 mln tonnes, whilst the third quarter was again very negative, both in absolute numbers (just 14.4 mln tonnes) and on a seasonal basis (-7.7 percent year-on-year). What is also important to point out, is the systematic shift in the destinations of South African coal cargoes. Until a few years ago, South Africa was able to benefit from its central location to supply both the Atlantic and the Pacific markets, enjoying the role of swing supplier. This is not the case anymore, as the European coal market has been rapidly shrinking due to investment in renewables and poor economic growth, and is also affected by cheap coal exports from Russia. As a result, South Africa managed to ship only 2 mln tonnes of coal to Europe in the first 10 months of 2019, down from 6 mln tonnes in the same period of 2018, and down from 8 mln tonnes in the same period of 2017. Europe now accounts for less than 5 percent on South Africa’s coal exports”. 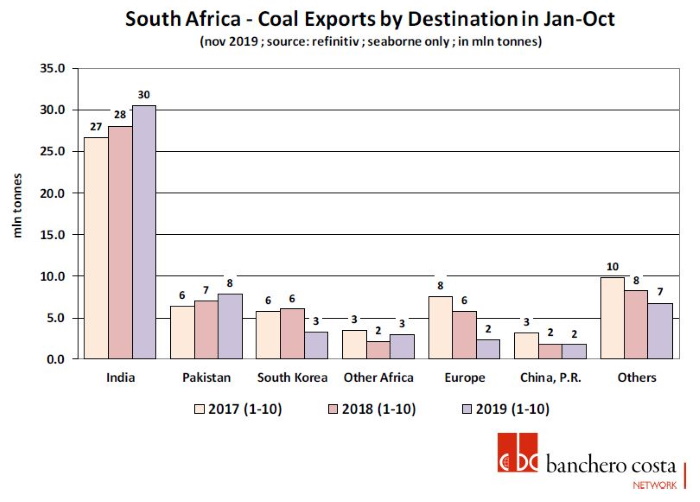 The shipbroker added that “at the same time, South Africa has never really managed to penetrate the lucrative East Asian coal markets – China, Japan, South Korea, as well as South East Asia, as it struggles to be price-competitive with Indonesian and Australian exports. On the other hand, South Africa has become increasingly reliant on the Subcontinent. India now accounts for 55 percent of South Africa’s coal exports, and Pakistan for a further 14 percent. In the first 10 months of 2019, 30.5 mln tonnes of coal were shipped from the Cape to India, a rise of 8.6 percent yearon-year. This is also +14.6 percent up from the 26.6 mln tonnes shipped in the same period of 2017. Exports to Pakistan reached 7.8 mln tonnes in January-October 2019, up 11.5 percent year-on-year compared to 2018, and +22.2 percent compared to the first 10 months of 2017. Another promising market is the rest of Africa. In the first 10 months of 2019, South Africa exported 2.9 mln tonnes of coal to other parts of Africa – in particular Senegal, Kenya, Madagascar, a gain of 39.1 percent year-on-year. It was the destination of 6 percent of South Africa’s coal shipment this year. Of the total volumes exported so far by South Africa, about 40 percent were shipped on Capesize or PostPanamax vessels, 30 percent were shipped on Panamax vessels, 15 percent on Supramax or Ultramax vessels, and 15 percent on vessels smaller than 50,000 DWT”.
Nikos Roussanoglou, Hellenic Shipping News Worldwide