A bullish sentiment is prevalent in the dry bulk market, leading to an increased demand for second hand tonnage. In its latest weekly report, shipbroker Allied Shipbroking said that “on the dry bulk side, the market seems to be overflowing with bullish sentiment at this point. Overall activity was sustained for yet another at week at the firm levels that we have become accustomed to of late. Moreover, given the rising trajectory in both freight returns and asset price levels, it may well seems that a robust direction is taking shape (for the near term at least). As for the past week, we saw mostly the volume being concentrated in the Kamsarmax/ Panamax size segments, with overall buying appetite though spilling over across all different sizes and age groups. On the tankers side, a modest flow of transactions took place for yet another week. Notwithstanding this, the overall tanker SnP market seems to be struggling to sustain any stable path. Thinking about the current levels in terms of realized earnings, this seems hardly as a surprise. During the past week, both the Suezmax and MR segments took the lead in terms of activity being noted”. 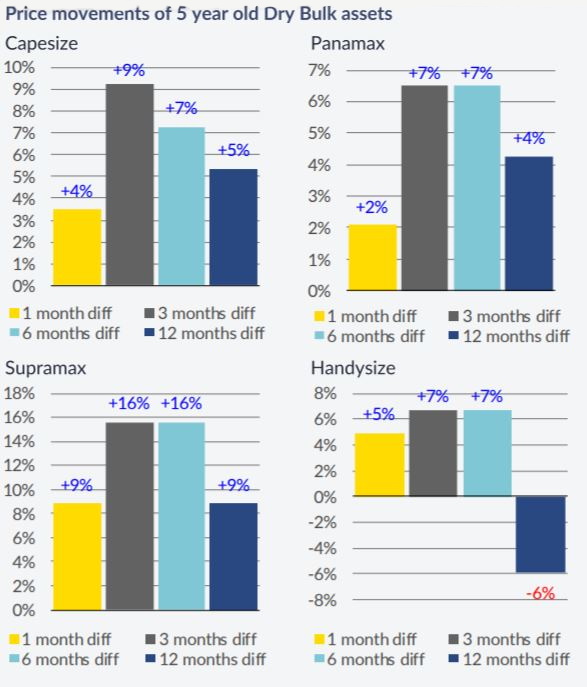 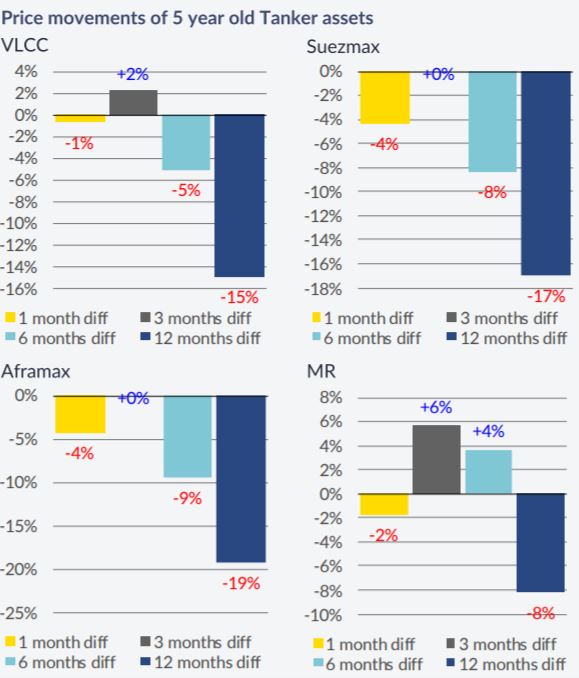 In a separate note, shipbroker Banchero Costa added that it was “a fairly active week for the secondhand dry sector; mostly focused on Karmsarmax sales which report as follows. The Japanese controlled KINOURA about 82,000 dwt built 2012 Tsuneishi which scrubber and BWTS fitted, is reported to Undisclosed for a region of USD 18 mln. Similar Korean tonnage got sold during the week, the MAGICA G 82,000 dwt built 2012 STX is reported sold to Marvin (Greece) for a price in xs of USD 16 mln whilst the sister INSPIRATION 81,000 dwt built 2010 STX is rumoured sold to Castor Maritime for a price of USD 14.8 mln. Same buyers which are very active in the market is also rumoured behind the purchase of Cido controlled FORTUNE RAINBOW 82,000 dwt built 2008 Oshima which changed hands for a region of USD 14 mln. 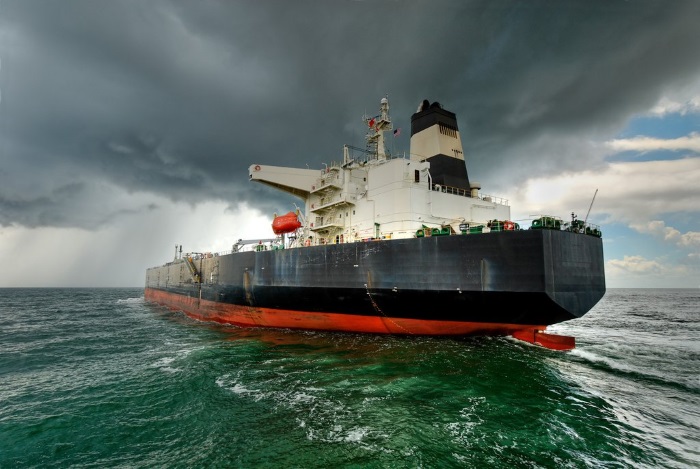 There is also speculation on the other two Karmsarmax owned by Greek owner, Laliotis which reported sold again to Castor for a price of high USD 15 mln each, the ships being GLOBE ELECTRA AND GLOBE DANAE 80,000 dwt built 2011 STX (no BWTS). In the Ultramax Sector, Doun Kisen sold the BULK HERO 61,000 dwt built 2016 Shin Kurushima (BWTS fitted) to an undisclosed buyer for USD 20.5 mln. A few Supramaxes also changed hands as Japanese controlled OCEAN PHOENIX 56,000 dwt built 2009 Mitsui is reported sold to Indonesian buyers for a region of USD 10.3 mln whilst the CERULEAN PHOENIX sister ship built 2009 Mitsui is well reported sold to Norwegians but no information emerged on the deal yet. 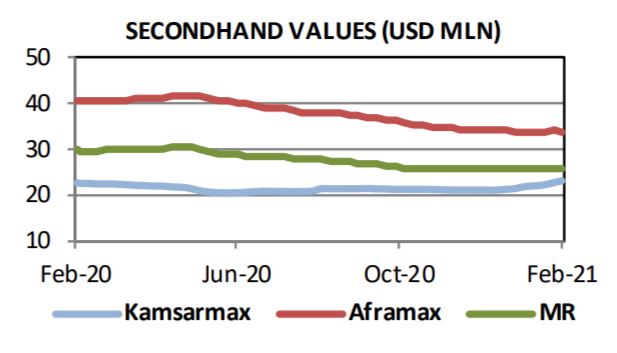 The Handy market is also keeping a very good pace with several interests actively inspecting tonnage and bidding. Following are the remarkable sale of the week; The OCEAN BARI STAR 37,000 dwt built 2013 Shimanami (BWTS fitted) is reported sold at USD 14.2 mln to Orient Line. In the smaller handy segment, the ATLANTIC VENUS 33,000 dwt built 2012 Fukuoka is reported sold to Georgian buyer for USD 10 mln while the comparable Korean built ARISTO II about 32,000 dwt built 2011 Samho is sold for USD 8.6 mln to Loadline. In the Tanker sector, the week was pretty quiet with Suezmax built 2017 SKS SEGURA of about 158,000 dwt is sold to Undisclosed for a region of USD 10 mln while in the Product sector, the Bright Fortune MR2 47,000 dwt built IWAGI is reported sold to Silva for USD 13.7 mln”, the shipbroker said.

Meanwhile, in the newbuilding market, Allied commented that “the market continued to hold a “modest” momentum for yet another week, given the good flow of fresh orders coming to light. In the dry bulk sector, the market experienced a slight boost on w-o-w basis, given the relatively strong number of orders (albeit at LOI stage for the time being). Moreover, given the current “excessive” upward trajectory from the side of earnings and the general bullish sentiment that is prevailing now in the dry market, it seem rather possible that we will see considerable fresh interest for newbuilding projects emerge over the coming months. In the tanker sector, the market was sustained on a relatively “good” track too, with a significant flow of new orders during the past week or so. With the VL segment being absent after the previous week’s boost, the MR sector seems to have taken the lead at this point. All-in-all, with the containership sector also indicating rather robust signs at this point, we may well expect a relatively vivid newbuilding market to emerge over the following weeks”, Allied concluded. 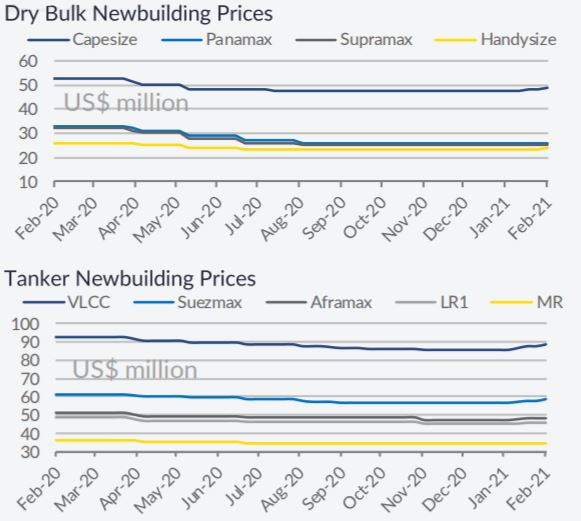 Similarly, Banchero Costa said that “in the LPG sector, Hyundai Mipo has expanded its orderbook by firming 2+2 40,000 cbm units with Trafigura, and we understand the options have already turned into confirmation. Price USD 52.5 mln apiece, including dual fuel LNG power. In the tanker sector Maran Tankers has inked a letter of intent with Samsung for four (4) VLCCs at a steep price of USD 105 mln each due to a very high grade specification (LNG fuelled). Deliveries are set throughout 2023. 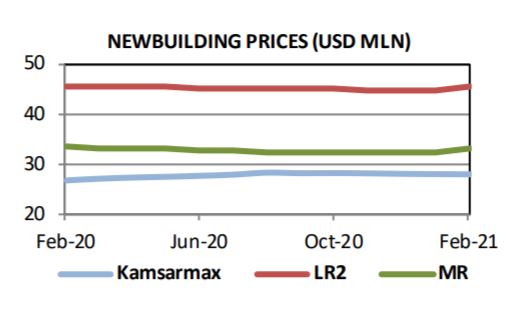 Previous: Global Container Shipping Rates Are High, but Unsustainable
Next: ECB wants veto power on stablecoins in the euro zone