Market Review:
As the Christmas period approaches, the Dry Freight markets are finishing the year on a negative footing, with little physical or sentimental reason the drag it out of a downward trajectory. Further dated futures into Q2 onwards do seem to have a more positive outlook, but the heavily discounted nature of Q1 period seems to indicate that not only is the year done, but also 2022 may start on a somewhat negative front. We wish you a happy festive period!

Capesize
At the beginning of the week the physical market was also under huge pressure as the Atlantic routes had rates slashed, and rumours of weaker fixing in the Pacific. This left many tilting towards the negative side sentiment wise with the run into Christmas upon us. With seasonal weather disruptions leaving Q1 heavily discounted, it will take a significant change to turn things around this year. 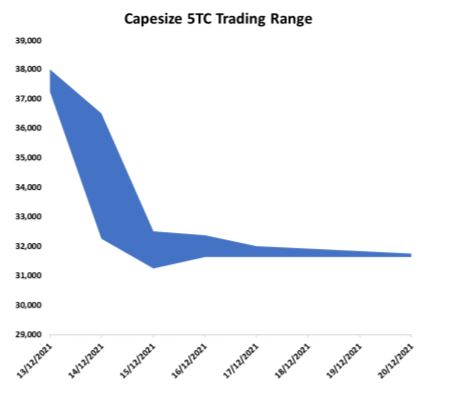 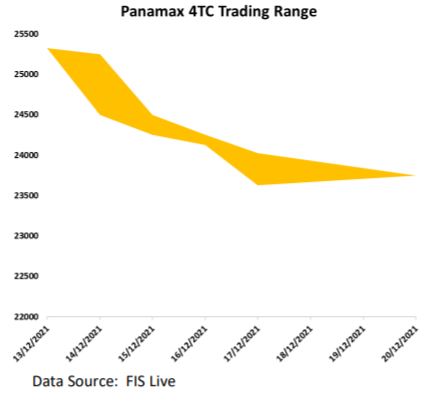 Panamax
The start of the week was marked by Panamax paper and underlying physical struggling to find a footing, with tonnage mounting in both basins and the bearish cape sentiment further fuels sellers appetite. There was support, however, for further dated futures contracts with the Q1 v Q2 spread contango widening further with some volume trading on the spread inside $1000-750 range as the longer dated periods remained supported.
Short-run bearish. 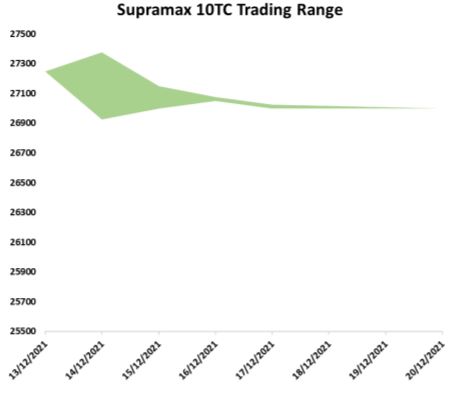 Supramax
Like the larger ships the Supramaxes drifted on thin volume, with a generally negative slide downwards.
Further dated contracts did see support however, especially highlighted is the Cal 23. Short-run neutral to bullish. 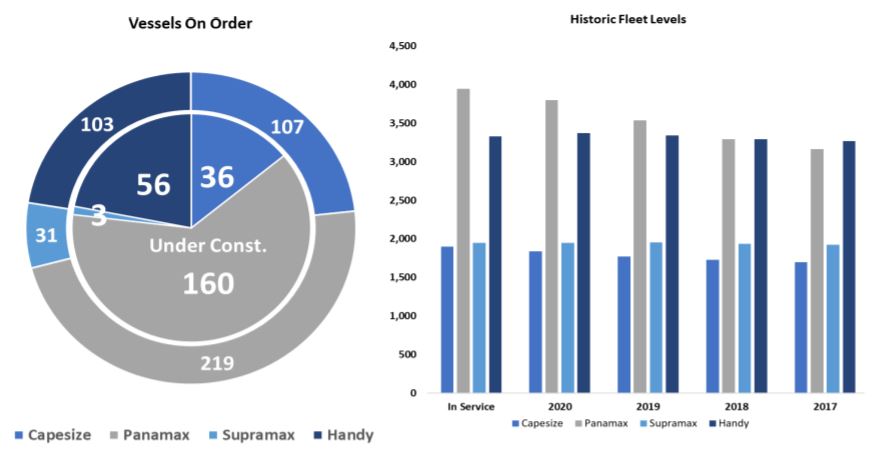 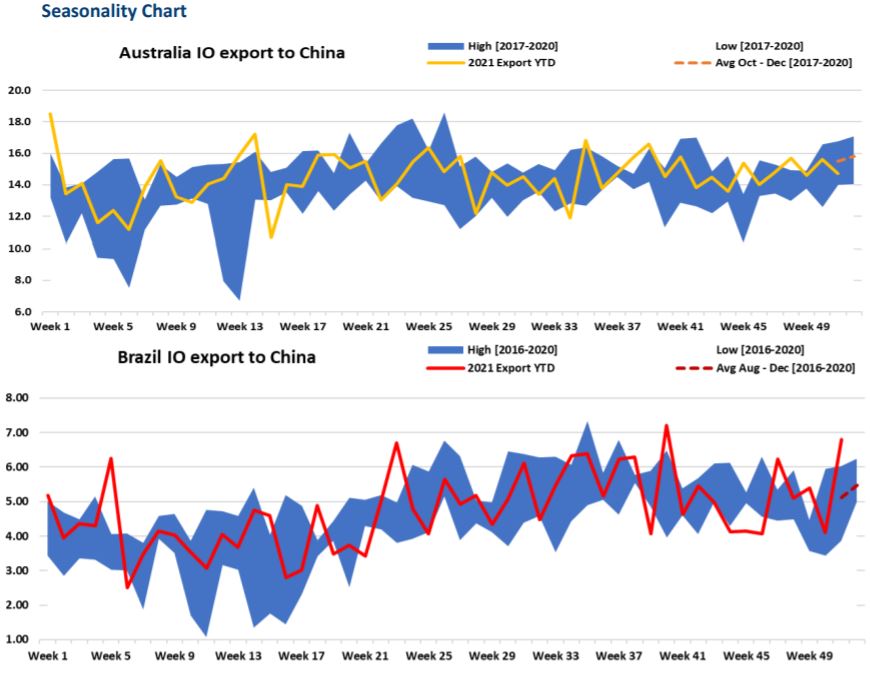 Dry Bulk Trades/Iron Ore
After the Chinese rate reduction, market confidence was boosted across commodity markets, iron ore prices surged to their highest since the end of October this year. However, downside risks remain for iron ore as Tangshan local authority implemented a new round of production measures in response to heavy pollution alert in the city, restrictions are effective from 19 Dec until further notice. Moreover, Mysteel data showed the blast furnace capacity utilization rate among the surveyed 247 Chinese steel mills, only dipped 0.15% from last week to 74.28% during 10-16 December, indicating a gradual recovery in demand. A survey published by the China Iron & Steel Association (CISA) today that the crude steel production in first three weeks of December climbed nearly 12% compared with the same period last month. That is in line with healthy steel margins which encouraged mills to boost their production. According to Bloomberg data, the profit margins were $149.66/mt for domestic HRC and $154.06 for rebar on 15 Dec, increasing about $30.8 and $44.6 respectively over a month.

IHS full year forecast of Australia iron ore export was lifted marginally to around 920-922 Mmt, and Brazil iron ore full year shipment forecast 5% higher at 353Mmt. From the seasonality chart below, the weekly shipment from the top two exporters again diverged, Australia to China weekly export stabilised at the 3-month level 14.7 million tonnes, while iron ore from Brazil broke through the seasonality range and rebounded nearly 63% to 6.8 million tonnes

Dry Bulk Trades/Coal
Chinese coal November import figures showed its strong demand in the winter month, imported 20.2 million tonnes from Indonesia, up 225% YoY, and received 3.3 million tonnes from its second provider Russia, 86% up YoY. The upward trend of demand is likely to continue although pollution levels are under watched before the winter Olympic. From the seasonality chart below, the top two exporters ramped up their coal shipments last week, Indonesia shipped more than 5.5 million tonnes last week, up 66.7% w-o-w. While Australia also increased the exports the, to Japan alone was 3.1 million tonnes. 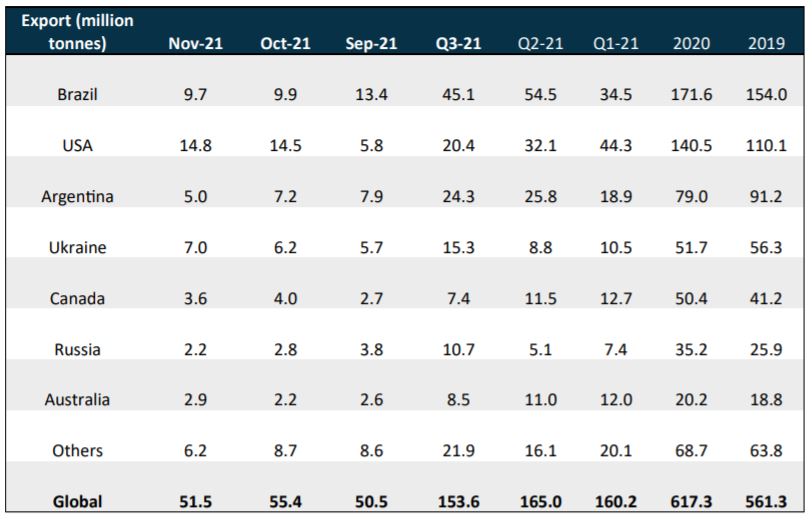 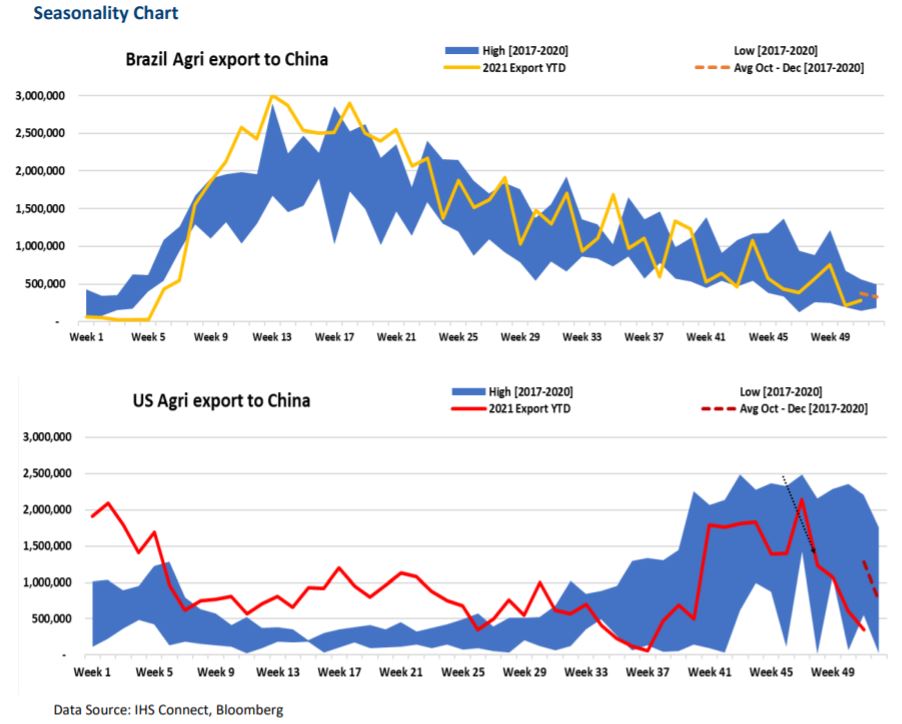 Dry Bulk Trades/Agri
Last week soybean prices were on the rise amid strong demand from China and concerns of dry weather in Southern Brazil, which resulted in large sales volume from Brazilian farmer at the current currency level. According to Chinese customs data reported on Monday China bought more soybeans from Brazil than US last month, China imported 3.75 million tons of Brazilian soybeans in November, up 37% YoY, compared with 3.63 million tonnes from US, down 40% YoY. The seasonality chart below represented this shifting trade flows, weekly shipment to China from Brazil recovered slightly and returned to the average seasonality range, another week of volume under 300kt. On the other hand US to China shipment remained depressed and fell out the seasonal average level to a low of 353.3kt, although it’s a peak season for US to sell its harvest, the export disruptions was earlier affected by Hurricane Ida and it took time to catch up. IHS estimated the agribulk shipments from the USA would dropped further in Q4 due to the lower soybean shipments, its forecast for December and full year stood at 15.7mt and 138.5mt respectively.
Source: Freight Investor Solutions