Since its public debut in 2005, George Economou-led DryShips (NASDAQ: DRYS) has stood out from the pack in the public shipping arena.

It has done more controversial related-party deals than any other listed shipping player. It has been sued by shareholders more often than any other public owner (although it has yet to lose a case). Its stock has risen more sharply and fallen more precipitously than any other ocean shipping equity.

Now, DryShips appears poised to bow out of Wall Street altogether, marking the end of an era.

On June 13, the company announced a bid from Economou to buy all the remaining shares he does not already own and take the company private. The offering price is $4 per share, a 27 percent premium to the June 12 close and 20 percent above the average price over the last 10 trading days. 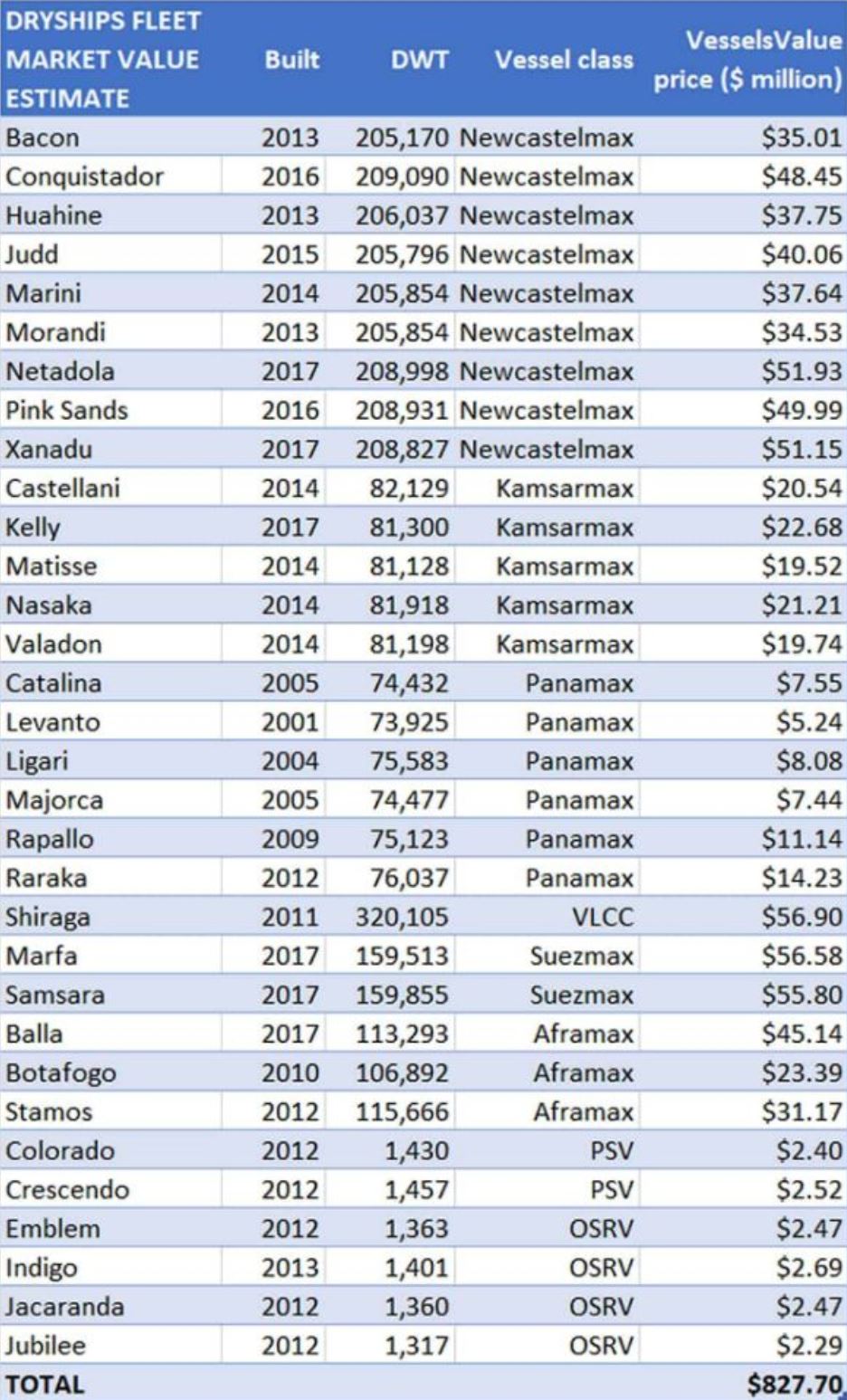 The board will appoint a special committee of independent directors to review the deal. Assuming the committee approves, it is all but assured that the deal will close, given that Economou owns 83.4 percent of DryShips’ shares and that he’s the company’s founder, chief executive officer and chairman.

His offer values DryShips at $347.5 million on the equity side, plus he would assume the company’s debt, finance lease liabilities and other liabilities of $364.4 million, which equates to a total implied offer of around $712 million.

How does this compare to the net asset value of the fleet itself, in terms of both its book value (purchase price minus depreciation) and its estimated market value (what the ships would obtain in the second-hand market)?

In its annual report, DryShips said that as of December 31, 2018, the market value of its fleet, excluding charter values, was higher than the book value, but it declined to disclose by how much.

In its first-quarter results, it reported that the book value of its ships was $748 million, and including cash and other assets, its overall assets totaled $1 billion.

Since then, DryShips has purchased the half-stake in vessel-pool operator Heidmar that it did not already own from Morgan Stanley for a curiously low price of $17 million (given that Heidmar was valued at over $200 million in 2006). But the half DryShips previously owned would assumedly be covered in the first-quarter assets figure, and the purchase cost would assumedly be subtracted from first-quarter cash position, so the Heidmar deal should not change the equation.

Subtracting debt and other liabilities implies that DryShips – based on its ships’ book values – was worth around $637 million on paper at the end of the first quarter.

To obtain its fleet’s market values, FreightWaves asked for the current estimated pricing from VesselsValue, a U.K.-based company that conducts ship valuations and provides analytic services. As of June 13, VesselsValue estimates an aggregate market value of DryShips’ fleet of $827.7 million (i.e., $79.7 million more than the reported book value).

Using this figure instead of the book value of the ships, then recalculating assets, and subtracting debt and other liabilities, puts the rough adjusted net asset value of DryShips at around $717 million. That is very close to the offer valuation implied by the $4 per share proposal by Economou, when including the assumption of debt and liabilities.

Thus, at least from a ‘back of the envelope’ perspective, the deal appears to make sense to non-Economou shareholders in light of current ship valuations. There does not appear to be a ‘smoking gun’ pointing to yet another DryShips controversy and lawsuit, at least for this particular transaction.
Source: FreightWaves