The trend of easing supply that dominated the clean copper concentrate market in the third quarter looks set to extend into Q4 amid sufficient smelter inventories, likely intensifying upward pressure on treatment charges in China.

Supply of clean copper concentrates — which are preferred by Chinese smelters in terms of quality — improved in August, mainly due to delivery default of Chinese trader Ruisheng. The privately-owned company had issues opening letter of credits in August, and numerous suppliers cancelled contracts with them as a result, impacting several prompt-loading and -arrival shipments feed to smelters. 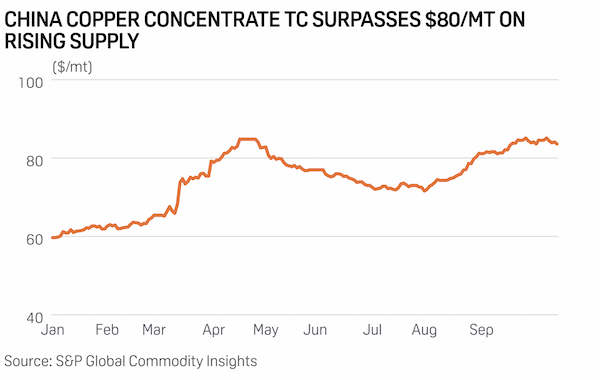 Treatment and refining charges, or TC/RCs, for forward-loading clean copper concentrate increased thereafter, as more offers were available and producers were actively looking for spot sales in September.

A major Chinese smelter, Daye Nonferrous, delayed the planned startup of a second production line in July to October. There were market talks in August that South Korean smelter LS Nikko faced production issues, which impacted several lots of copper concentrates. As a result, redundant tons were being offered from smelters, squeezing spot liquidity. 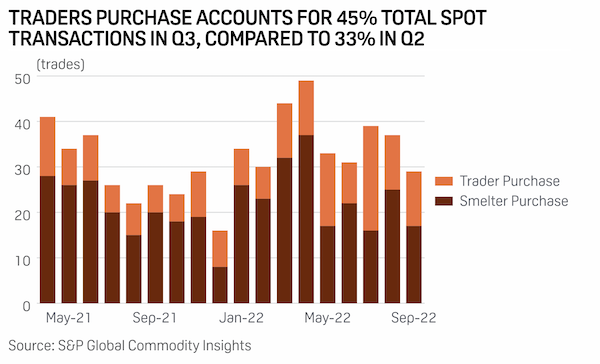 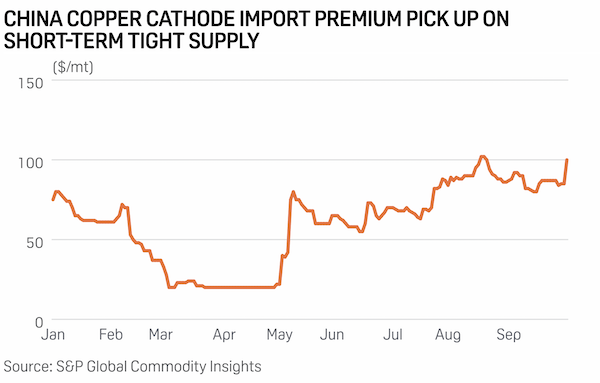 Direct purchases by smelters fell in the third quarter, as traders were more active in restocking to cover short physical position.

Amid increased availability of clean concentrate, smelters’ appetite for non-standard copper concentrates, such as Toromocho or blended materials, fell sharply.

A smelter source said that some traders have utilized 80% of quota in the first half of the year, which means traders can only deliver more clean concentrates through term contracts for the rest of the year.

Meanwhile, expansion of Kamoa in Congo, Timok in Serbia and Grassberg in Indonesia provided more non-standard copper concentrates for traders to blend. This led to an increase in market size for blended concentrates compared to the last few years.

Copper concentrate output is also expected to ease further in Q4, as water supply improves in South America. Production at the Las Bambas copper mine has returned to normal and supply from Quellaveco is also giving smelters more options.

On the demand side, Daye Non-ferrous is expected to ramp up the second production line in October, but another two major Chinese smelters — China Copper and Dongying Fangyuan — have planned maintenances for a month in Q4. Shandong Guorun smelter also plans to shut an existing 100,000 mt/year production line in December as it prepares to start up a new production line in 2023.

Spot interest from ex-China markets is also muted ahead of annual contract negotiations for 2023.

In addition, weak sulfuric acid demand and falling prices have lead smelters to having a stronger preference for buying more blister instead of copper concentrate, as blister would not produce sulfuric acid as byproduct and can help smelters to meet annual production target while reducing costs.

Meanwhile, in the copper cathode market, production disruptions and liquidity issues at one of China’s biggest copper traders, Maike Group, led to a short-term supply shortage.

Maike Group imports 1 million-1.5 million mt of copper cathode into China per year, but failed to carry out contracts further in September due to cashflow and liquidity problems.

Maike Group is an important copper importer to China. Liquidity issues at the company limited the movement of large volumes of metals in the market, contributing to more invisible and immovable stocks, according to a trader.

In addition, traders brought metals from LME warehouses to China when the arbitrage window opened in August, and with the shortage of blister, anodes and scrap — due to falling copper prices — the market saw falling copper stocks and widening of futures backwardation in Q3.

Wide futures backwardation impacted spot liquidity, causing quotational period to become key during price negotiations. Voyage time from origin to China became more important than cathode brands as buyers worried about shipment delays.
But the demand outlook has been gloomy as well. The struggling property market in China, increasing production costs and geopolitical uncertainties continued to keep traders away from the spot market.
Arbitrage window to the US closed in Q3, and Southeast Asian buyers were heard deferring term contracts due to slow downstream demand.