In recent trading, basis prices at Katy Hub and Houston Ship Channel have tumbled, settling in the week ending Sept. 23 at a nearly $1.50/MMBtu discount to the benchmark Henry Hub – down from an average discount closer to about 60 cents/MMBtu in August, data from S&P Global Commodity Insights shows.

The price dislocations in East Texas come as Waha’s basis market hits lows not seen in almost two years. Over the past week, cash prices there have traded about $2.90/MMBtu behind Henry Hub, marking a sharp decline from August when the location traded at an average discount of just $1.22/MMBtu.

The sharp drop in West and East Texas gas prices tracks to a recent surge in Permian Basin production and an accompanying uptick in eastbound gas transmissions from West Texas to the Gulf Coast. 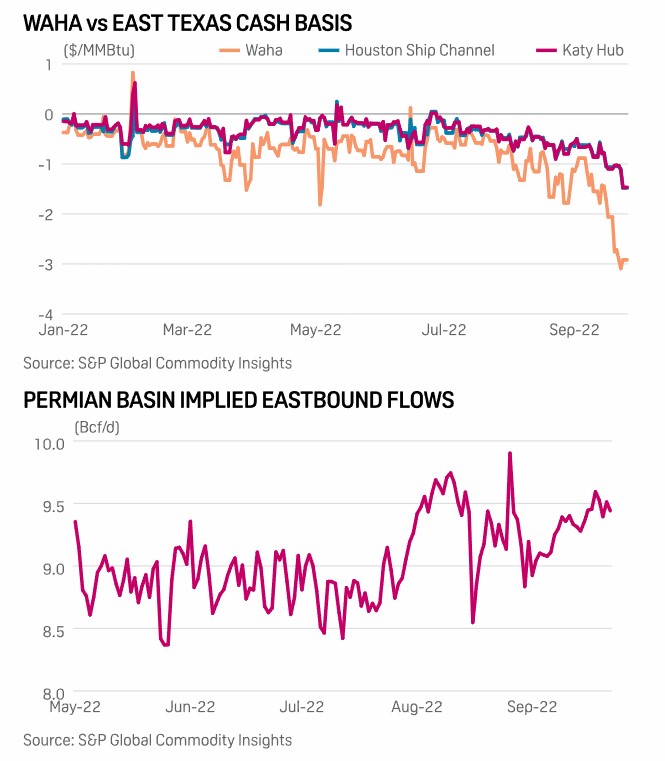 Production, flows
In September, production receipts from the Permian Basin have averaged 15.2 Bcf/d, according to a modeled estimate from S&P Global. Compared with August, output is up about 200 MMcf/d. Since July, production has grown by nearly 600 MMcf/d.

With the Permian’s northbound pipeline corridor running at close to capacity and the westbound route currently restricted by maintenances, West Texas producers have had little choice but to send gas east toward the US Gulf Coast.

While flows on intrastate pipelines like Gulf Coast Express, Permian Highway and Whistler Pipeline are not publicly reported, implied flow data shows a jump in eastbound transmissions that began in August, with flows averaging nearly 9.4 Bcf/d from Aug. 1 to Sept. 26– an increase of about 500 MMcf/d since July.

According to an S&P Global Commodity Insights estimate, eastbound capacity from the Permian Basin currently totals about 10 Bcf/d, with flows averaging close to 94%-95% of capacity.

Thanks to recent brownfield expansions on the three aforementioned pipelines, Permian producers can look forward to additional eastbound capacity totaling just over 1.7 Bcf/d as early as September 2023. Beyond that, producers are hoping even more capacity will come online by Q4 2024 when the greenfield 2.5 Bcf/d Matterhorn Express Pipeline is expected to enter service. 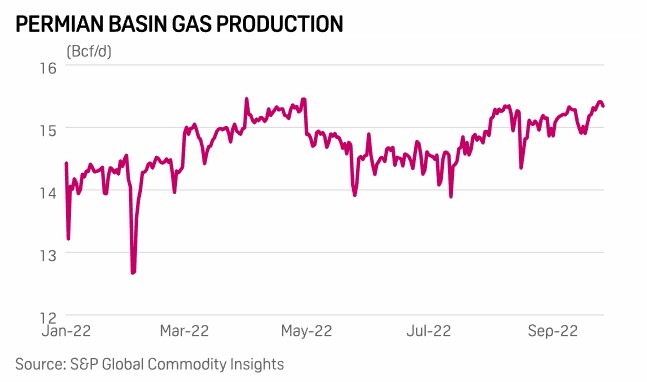 Outlook
Based on recent production growth in the Permian, forwards markets are already betting that Permian gas prices are in for a rocky road ahead.

For October and November, the market is currently priced at a steep discount of about $2.70-$2.80/MMBtu below Henry Hub. While basis spread narrows during the peak heating season, similar discounts are priced in from March 2023 onward, with no significant price relief expected until next November.

While the balance-of-October contracts at Katy and Houston Ship Channel are currently priced about $1.15/MMBtu below the benchmark, basis markets for January and February are now at a premium. For Q2 and Q3 2023, the two locations are priced at just 25 cents/MMBtu below Henry Hub, Platts M2MS forwards data shows.
Source: Platts