European Central Bank officials expressed confidence over the euro area’s brightening economic outlook, while hinting at differing preferences for the speed at which monetary policy should respond to recent improvements.

Bundesbank President Jens Weidmann — whose country has been at the crux of a broader slowdown in the region — said Germany’s excellent labor-market situation and rising incomes should help boost private consumption, with a strong increase in retail sales in the first quarter providing an early indication of the trend. He urged the ECB to press ahead with its exit from unconventional monetary policy if inflation allows. 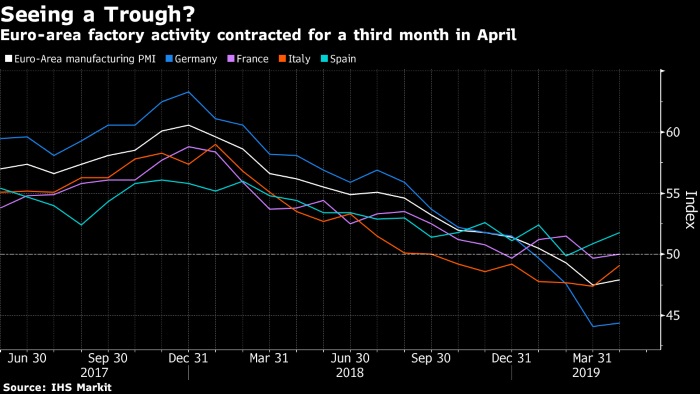 “From today’s perspective, much suggests that the economy is only experiencing a temporary weak phase and will pick up speed again after its soft patch,” he said in a speech in Dusseldorf, Germany, late Thursday.

Finnish central-bank Governor Olli Rehn, speaking in Stockholm, noted this week’s stronger-than-expected growth reading for the region as evidence of a recovery, but warned against overreacting to the data.

“Some very recent indicators hint at stabilization,” he said. “This is good news, of course. But in my view we should not jump the gun after the first green shoots and change the course. In policy-making, it is often better to be safe than sorry.”

Such reports bode well for expectations of a rebound in the second half. ECB officials have repeatedly assessed the region’s slowdown as mostly transitory, even while laying the groundwork for further stimulus should it be needed. In March, the ECB pushed back expectations for interest-rate hikes and announced a new round of long-term loans to banks. 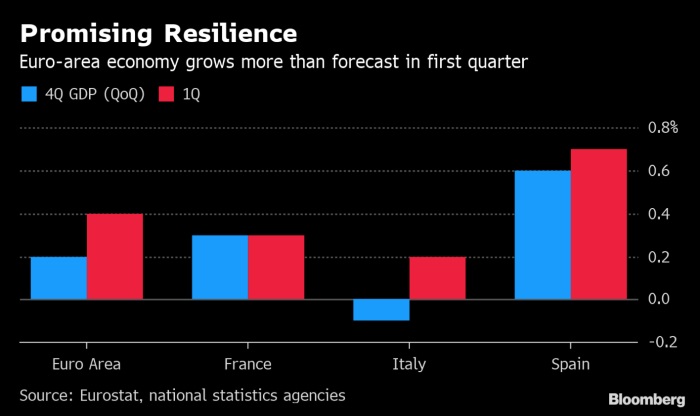 “The task of monetary policy is to maintain price stability in the euro area,” Weidmann said. “That means to react to weak domestic price pressures, but also to continue down the path of normalization and not to procrastinate unnecessarily, if inflation prospects allow. An extraordinarily expansionary monetary-policy stance can’t be a permanent state, not least because it comes with risks and side effects.”

Both Weidmann and Rehn are seen as leading contenders for the ECB presidency after the central bank’s current chief Mario Draghi steps down in October. European Commission President Jean-Claude Juncker, whose job is also up for grabs this year, endorsed Weidmann in a Handelsblatt interview, calling him a “convinced European and experienced central banker.”

Rehn has been an active proponent of reviewing the ECB’s strategy after the central bank has for years failed to significantly lift inflation. Austrian Governor Ewald Nowotny supported the initiative on Thursday, while ECB chief economist Peter Praet — whose term ends this month — cautioned against major changes.

“One has to be careful about the words you use and the signals you send to the markets. At the end of the day your mandate is price stability,” he said in Vienna. “The framework has served us well.”
Source: Bloomberg