Economic growth in developed economies remained weak in the second quarter of this year, as the war in Ukraine hampered output in many nations.

The Organization for Economic Cooperation and Development (OECD) said the combined gross domestic product of its 38 members expanded by 0.3% in the second quarter over the first quarter, when it was also 0.3%. That’s well below the average quarterly growth rate of more than 1.2% last year. 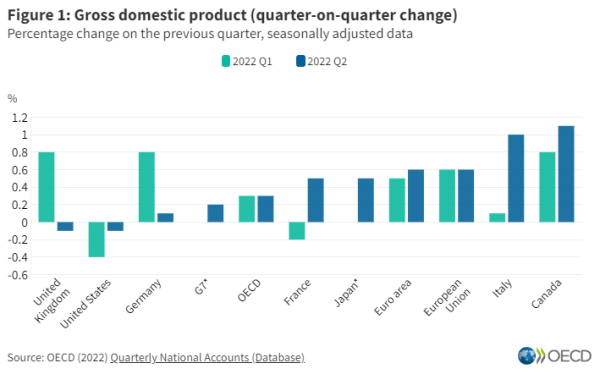 The OECD said this reflected a mixed picture, with contractions seen in the US and the UK, and a sharp slowdown in growth in Germany. That was offset by positive growth in Canada, France, Italy and Japan.

The underlying drivers of growth also showed a mixed picture. Net exports bolstered GDP growth in France and made a positive contribution in the UK and US. However, net exports contributed negatively to GDP growth in Germany. 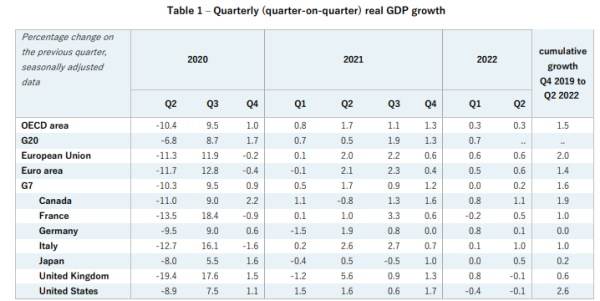 The OECD data echoes gloomy outlooks from other economic forecasters, with the International Monetary Fund (IMF) saying in July that the global outlook had become more uncertain. Image: OECD

Countries closest to the war in Ukraine saw some big shifts, with Poland moving from GDP growth of 2.5% in the first quarter to a contraction of 2.3% in the second.

Latvia and Lithuania also saw a change from positive GDP growth to contraction, while growth in Hungary slowed from 2.1% to 1.1%.
Further from the war, Israel recorded the strongest GDP growth in the OECD, at 1.7%, followed by Mexico at 1.0%.

The OECD data echoes gloomy outlooks from other economic forecasters, with the International Monetary Fund (IMF) saying in July that the global outlook had become more uncertain . It revised down its growth forecast by 0.4 percentage point and now sees this year’s global expansion at 3.2%, compared with 6.1% in 2021.

“Several shocks have hit a world economy already weakened by the pandemic,” the IMF said. These include “higher-than-expected inflation worldwide – especially in the United States and major European economies – triggering tighter financial conditions; a worse-than-anticipated slowdown in China, reflecting COVID-19 outbreaks and lockdowns; and further negative spillovers from the war in Ukraine”. 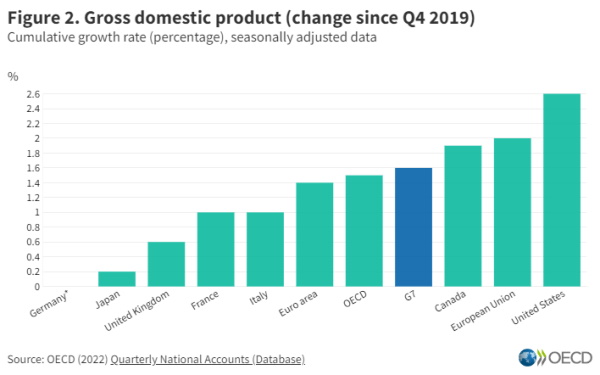 There were some glimmers of hope, with the OECD data showing that – as of the second quarter – all G7 countries are now recording GDP levels equal to or exceeding the pre-pandemic levels seen in the final quarter of 2019.