Edison holds at the Port of Ravenna the naming ceremony of the LNG carrier through which Edison will complete the first integrated logistics chain in Italy of LNG (liquefied natural gas) for the decarbonisation of heavy transport. LNG The Ravenna Knutsen vessel is one of the world’s first small LNG carriers, with a capacity of 30,000 m3 and high operational flexibility.

In November 2018, Edison entered into an exclusive charter agreement with Norwegian shipowner Knutsen OAS Shipping for a newly-built vessel for the duration of 12 years (renewable for a further 8 years). Built in two years (10 months of engineering work and 14 months of construction) by Hyundai Heavy Industries in the Mipo shipyard in South Korea and delivered in February 2021, the LNG carrier is equipped with a 7450 kW two-stroke dual fuel engine, fuelled by LNG and marine diesel. It also has three dual fuel generators of about 1480 kW each that supply the ship’s electrical consumers, a shaft generator that optimises the ship’s internal consumption and a liquefaction unit that allows the pressure inside the tanks to be managed more flexibly and efficiently. 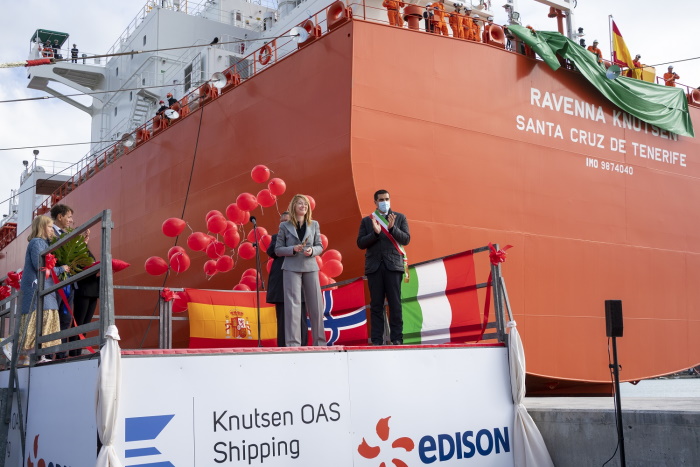 The ship, entirely dedicated to Edison’s small-scale activities, can transport up to 30,000 m3 of LNG through three tanks (b-lobe c-type) made of high-nickel steel and properly insulated, capable of withstanding cryogenic temperatures. With a width of 28.4 m, a height of 19.4 m and a length of 180 m, the carrier can reach a speed of 15 knots. It is also equipped with a double set of manifolds (both low and high), giving it greater operational flexibility. The Knutsen is one of the few ships in the world and the first in Italy to possess these physical and functional characteristics. 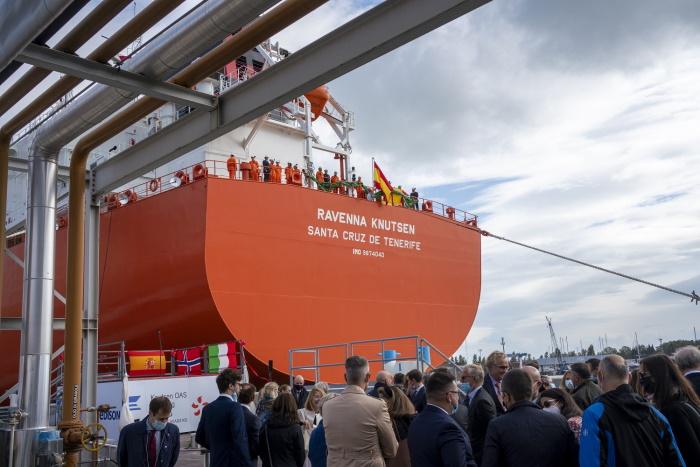 In September, the Ravenna Knutsen carried out the first offloading of liquefied natural gas in the Ravenna coastal depot. After taking its first cargo of LNG at the Enagás plant in Barcelona, Spain, it docked at the quay in front of the port’s coastal depot of Ravenna, starting the controlled tank filling operations, preparatory to the commissioning of the plant scheduled for the end of October.
Source: EDISON